Todd H. Bol created the first Little Free Library in 2009 in his hometown of Hudson, WI. Created to honor his mother, a teacher passionate about reading, it encouraged his community to "give a book, take a book" for free. Following growing popularity in his community, Bol worked with his friend, Rick Brooks, to create the nonprofit organization, Little Free Library. Through this organization, people around the world are able to create their own little free libraries, connect with others in their community, and learn other ways to encourage literacy throughout their communities. Though Bol passed away in 2018, his legacy lives on through Little Free Library and through those who have joined him in his mission to build literacy and to build community. 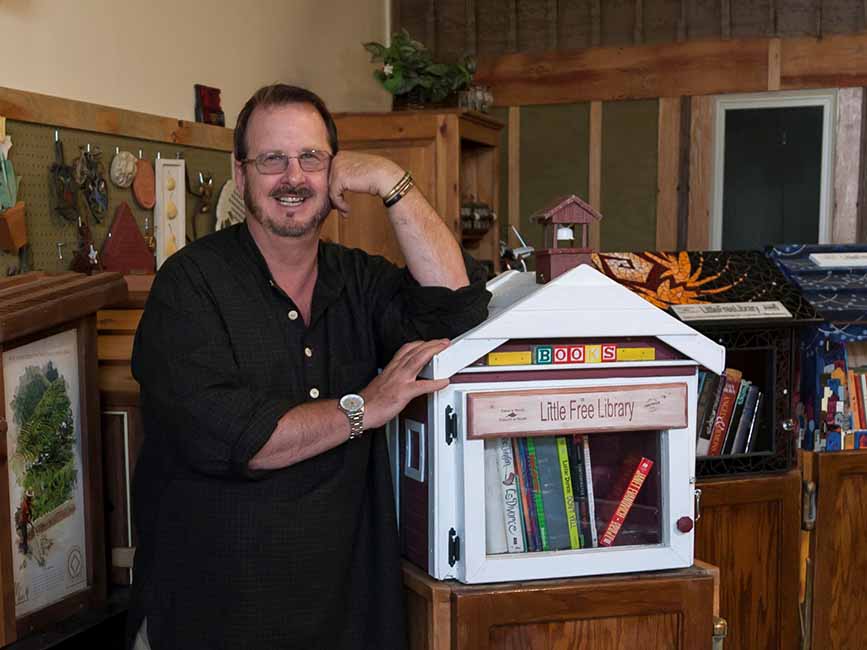 In 2009, Todd H. Bol created the first little free library in the front yard of his home in Hudson, WI. This little library was a tribute to his late mother, who had been a teacher who loved to read. The little library itself was a wooden box, decorated to look like a schoolhouse, in which books could be placed and taken by passersby for free. Besides acting as a tribute, Bol’s goal for his little library was that it would encourage literacy and bring the community in his neighborhood closer together. Over time, interest in his creation grew.

“As stronger community connections form around free book sharing, the sweeter side of our shared humanity will expand like ripples across a pond.”(5)

Bol’s main hope for Little Free Library is that is would encourage stronger ties within communities. Many responses to the organization and its goals were positive and reinforced this hope. In addition to his organization, Bol also supported various other ways that communities could come together, including funds, clubs, and programs. Impact Library Grants Fund is one fund he created, to help build Little Free Libraries that are accessible in communities with lower resources. He also created the Action Book Club, a more involved book club with discussions as well as community projects. This way, Bol provided communities more than one way to come together through literacy.

Bol and his Little Free Library organization are not alone in their efforts to spread literacy, as public libraries, museums, companies, and schools, partner with the organization. Some examples of these partners include Penguin Random House, Books for Africa, and the New York Times Learning Network. By working with these partnerships, the greater public continue to learn about and get involved with Little Free Library.

Todd H. Bol passed away on October 18th, 2018, after a brief battle with pancreatic cancer. His legacy continues in his Little Free Library organization, which continues his efforts to promote literacy, through the creation of little free libraries.