Once people started moving willingly to the west, there was a great need to get mail from central US to the western areas of the continent. While there were southern routes, like the one used by the Butterfield Mail Company, the Civil War in the US was beginning to make the government, and other investors in the west, worried about their usability. Thus, a central route was necessary. Enter the Pony Express. The Pony Express was a letter deliver service created by Russell, Majors & Waddell in 1860 that delivered letters for $5, promising a 10-day journey for delivery. It is often romanticized, despite being a massive financial failure. The Rush Valley Pony Express Station is just one of many along the 1900 mile route, but is located just southwest of Salt Lake City. 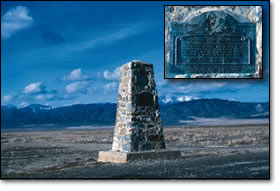 The Pony Express began in 1860, founded by the Russell, Majors & Waddell freighting firm. The official name of the Pony Express was the Central Overland California & Pike's Peak Express Company. The mail delivery service beings in St. Joseph, Missouri and ends in Sacramento, California. Roughly 176 stations existed along the route, some being built during the short lifespan of the service from April 3rd, 1860 to October 1861. Russell, Majors and Waddell already owned a stagecoach delivery service that used a similar route. The Pony Express utilized some stations already in existence and used by the stagecoach delivery service.

There were two different types of stations along the route; The home station and the relay station. The home station is where riders would sleep and rest between rides and the relay stations were used to switch out tired horses for well rested ones to continue. The riders would ride on average 75 miles in one direction, rest shortly at the home station they passed the mochila at, then would ride back to their original home station. The mochila was a large square of leather that sat over the saddle, with holes for the saddle horn and back of the saddle seat to protrude from. Each corner had a secure box where the mail was stored. The riders would pass the entire mochila, instead of only the mail, ensuring that it all arrived at its intended destination.

The Rush Valley Station is located southwest of Salt Lake City in Utah along what is now known as Pony Express Trail Road. It is marked only by a large stone monument indicating its existence. Like most other stations, this one did not survive to today as most stations were small shacks built from either lumber or adobe.

Interview with Frank Norris on November 23rd, 2019. Frank Norris is a retired historian who worked for the NPS on the Pony Express National Historic Trail.