The Leatherwood Museum dates back to 1888, and they are the home of Coushatta Indians, but the museum is in Oakdale, Louisiana.It is said to have been a railroad company house, board house, hospital, family home and museum. The museum, as original as possible after upgrades, has a treasure of artifacts and history of Allen Parish. From a walking cane from President Andrew Jackson's Hermitage Farm to the origial tiger oak furniture. There is something to do that is very entertaining for every age group.

This is the Leatherwood Museum 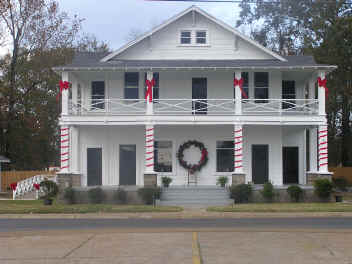 On September 27, 2008, the Allen Parish Tourist Commission opened Leatherwood Museum in Oakdale in a two story house which served during the early 20th century as a hospital where women waited on the second floor balcony to deliver their babies. The museum focuses on the history of agricultire and timber. Upstairs exhibits included pictures and a machine for cutting rice stalks, displays of early dental and medical equipment, pictures of war maneuvers during World War II, and a letter from David Dunn to his wife. Dunn was the grandfather of William T. Dunn, founder of Dunnsville, which became Oakdale. An education room contains displays on Louisiana High School Hall of Fame sports figures Curtis Cook of Oakdale, Johnny Buck of Kinder, and Hoyle Granger of Oberlin. Granger, an inductee of the Louisiana Sports Hall of Fame who starred for the Houston Oilers addressed the grand opening of the museum.

The grand opening was on September 27, 2008 at 10 A.M.  Other exhibits focus on the Coushatta Indians and the Courir De Mardi Gras or the country way of celebrating Mardi Gras in Allen Parish. Adagria Haddock, director of the Allen Parish Tourist Commission, said that in addition to a hospital, the building formerly served as a boarding house and the home of the Leatherwood family. The house dates to July 3, 1888. The Leatherwoods turned the building into a museum in 1986, but it closed a decade later because of a lack of funding. In 2005, the house was donated to the Allen Parish Tourist Commission.

The native American exhibit focuses on more than just the Coushatta Tribe, they have had a Native American presence in Allen Parish for s ome 10,000 years. The two exhibits Leatherwood Museum has is an exibit on the St. Paul Baptist Church, which was also the Moorehead Public School. Which just happens to be the very first African American school recongized by the Allen Parish School Board. This exhibit is a picture of the actual building, the last graduating class, a certificate showing the status on the National Register of Historic Places, and an orginal bench from the school itself. The other Exhibit is from the Allen High School Band with a french horn and a highschool jacket.

The downstairs contains the furnishings of a typical family house of the time, with displays of clothing and other period artifacts. We just wanted you to feel like home when you walked in and then go explore the museum part upstairs, Haddock told Alexandria Daily Town Talk. The facility is handicapped-accessible with an elevator.  A state grant of $65,000 helped fund restoration. The museum can be contacted at (318) 335-0622, (888) 639-4868 or at www.AllenParish.com on-line.