This historic Toledo home was constructed in 1877 by local businessman Peter Gendron who made his fortune in the transportation industry by patenting a new wheel that featured wire-frame metal spokes. Gendron moved to Toledo from Canada in 1865 and started his first factory in 1887. Although his first factory quickly failed, Gendron persisted and established a new business on the second floor of this home in 1880. This firm, the Gendron Iron Wheel Company opened a new factory in Toledo in 1883. Peter Gendron passed away in 1910; however, his company continued and was purchased by a new owner as part of a 1927 corporate merger. After the demolition of the Gendron Iron Wheel factory, the Gendron home is the last reminder of this revolutionary Toledo industry. 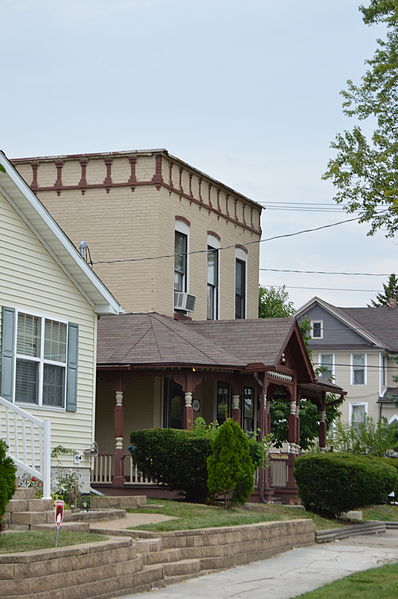 The Peter Gendron House was commissioned by prominent Toledo businessman Peter Gendron in 1877. Gendron was an immigrant, born in Canada in 1844, Gendron moved with his family to Massachusetts in 1854. Peter Gendron moved to Toledo in 1865, where he would make his mark on the tire industry. Gendron was first introduced to the transportation industry by his father, working in his wagon manufacture and repair shop from 1859-1865. Gendron opened his own manufacturing factory in Toledo in 1877, making children carriages with wire-frame wheels, reportedly the first such factory in the United States.

Gendron’s patents for wire-frame wheels and transportation related to the new lightweight design numbered 25. Due to a lack of funding and inadequate promotion Gendron’s factory shutdown in 1877, shortly after opening. Not dissuaded by this, Gendron moved manufacturing to the second floor of his home (The Gendron House) and continued production. In 1880 Gendron formed the Gendron Iron Wheel Company. After working out of the second floor of his own home Gendron opened a new factory in 1883, which occupied an entire city block in Toledo. The Gendron Iron Wheel Company took off due to the revolutionary wire-wheel design, becoming a national leader in bicycle, tricycles, wheelchairs, carriages, as well as various wheeled toys.

Gendron opened a factory in Canada in 1888 to complement his United States factories. By the 1920s Gendron Iron Wheel Company was producing more wheelchairs than any other company in the world, including 34,000 for the U.S government during World War II. In 1927 the Gendron Iron Wheel Company merged with three other companies, the American Metal Wheel Company, Toledo Metal Wheel Company and the National Wheel Company forming the American-National Company. This company located its headquarters in Perrysburg Ohio, manufacturing wheel chairs and hospital equipment. The Gendron factory in Toledo was abandoned in 1938, being demolished in 1967 as part of an urban renewal project. Peter Gendron passed away in 1910 at 66 years old. His home is the last reminder of this historic piece of Toledo’s past.