Less than 200 years ago human beings were trapped within the walls of this building, called the Montmollin Building, where they awaited the horrific reality of being bought and sold as slaves in the United States. Located at 21 Barnard St. 31401, the building sits right in the heart of Savannah’s City Market. The building is of historical importance because of its use between the 1850’s until December 1864, when it was used to hold, buy and sell slaves in the slave market. It was owned by John S. Montmollin and the 3rd floor was rented out to Alexander Bryan until Bryan later ended up owning the building. Both were known for being largely involved in slave trade throughout the city of Savannah. This building is particularly important because it continued to host and sell slaves even after the Emancipation Proclamation was signed by President Abraham Lincoln. Montmollin’s building only became slave free when “Sherman’s March to the Sea” put an end to it via physical force, and eventually turned it into a freed slave school. Sadly, today the building is still in tact, but without any commemoration to the slave-trade/slave school history. It is currently a pet store that people are free to walk through without seeing any recognition of the tragedy that took place within its walls.

This is a picture of the original Montmollin Building. The middle window of the top floor is said to be where the actual auction block was located and the two side windows are where the women would change their clothes to be sold into the slave trade. 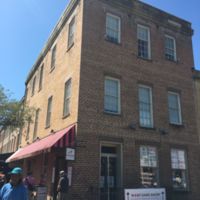 This is a photo from Lakeside Press that shows General Sherman’s letter to Lincoln once they had stopped Savannah from partaking in slavery.

This is an image showing what an actual slave auction advertisement for the Montmollin Building looked like. 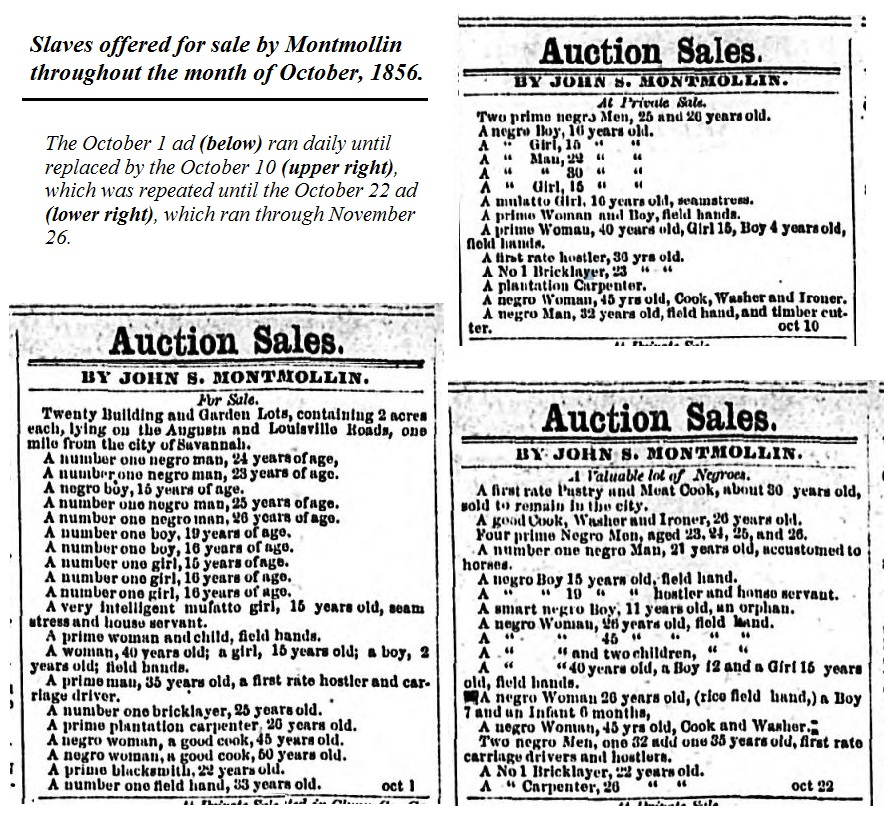 The Montmollin Building is no stranger to important history. It’s use as a slave-market auction-site is devastating at best, but on top of that, there is no commemoration for its slave history or the memory of the building being turned into a freed slave school after General Sherman and his “march to the sea.” The name of the building has even been changed, so to forget the memory of slave trader John S. Montmollin and his partner Alexander Bryan. The Montmollin Building is one of many historical buildings in Savannah, Georgia that have not been recognized for their historical significance.

As mentioned before, the owner of the Montmollin Building was none other than John S. Montmollin himself. He was well known in Savannah as a successful slave trader, so it was no surprise when he rented out his third floor to another well-known slave trader, Alexander Bryan. Although it was technically Bryan who ran the slave trade on the third floor, it is assumed that Montmollin was also involved because the bottom floor of building, below his first floor butcher shop, was used to house slaves in chains without being rented out by Alexander Bryan. Montmollin died in 1859 by explosion of a boiler of a steamer so his, “property fell into the possession of Alexander Bryan, who until a few days prior to the occupation of Savannah by the Federals, used the premises as a jail and office for the barter and sale of slaves,” (Savannah Daily Herald, 1865).

Slavery was part of a horrific period of time that will never be fully lost on people or history. However some people have forgotten, so it is important to know that even when the Emancipation Proclamation was put into law by Abraham Lincoln, several southern regions chose to ignore it and continue with the buying and selling of slaves. This included Antebellum Savannah. In fact, President Lincoln gave specific orders that slave trade was to be entirely ended by January 1st, 1863, however, the Montmollin building continued to buy and sell slaves until December 1864, almost a full two years after it was deemed illegal.

As soon as Lincoln found out that Antebellum Savannah and many other southern regions were still participating in the slave trade, he gave orders to General William T. Sherman to lead an army of 60,000 soldiers to Savannah from Atlanta. It was said that the sole purpose of this march was to scare those still partaking in slave trade into stopping. (history.com editors, 2018). They achieved this by stealing food and livestock and burning down the houses of individuals who tried to fight back against them. Although General Sherman was looking to put an end to the slave trade, it is important to acknowledge the immense amount of damage his soldiers and himself caused to the south. However, news of this march did not seems to scare Bryan and he continued to run his slave market until General Sherman and his soldiers physically forced him to stop. The slaves were set free and that same third floor was eventually turned into a school for freed slaves. (Mobley, 2009).

One would think a building with that much history would be filled with some type of commemoration, but the sad fact is there is none. Today, it is just an average pet store with no proof of its strong historical past. It takes a lot of digging to find out that the building was once a slave auction site. However, it takes even more digging to reveal that after the fact, it became a freed slave school. Even with that research, it still is unclear who managed the school, how long it was used, or who even was interested in using the building as a school. All that is mentioned is that the third floor was no longer property of the original owners and continued afterwards as a school. Obviously, somewhere along the way that history was covered up and turned into a pet store where people are now oblivious to the trauma that took place within its walls.