Though few people are aware of its existence, beneath a section of Atlantic Avenue in Cobble Hill is one of the world's oldest subway tunnels. Built in 1844 by railroad magnate Cornelius Vanderbilt, the tunnel was built in just seven months and accommodated two railroad tracks. The tunnel was capped in the 1850s and forgotten until the 1980s. The New York City Department of Transportation offered tours of the tunnel at one time, it is now closed to the public. The tunnel was added to the National Register of Historic Places in 1989. 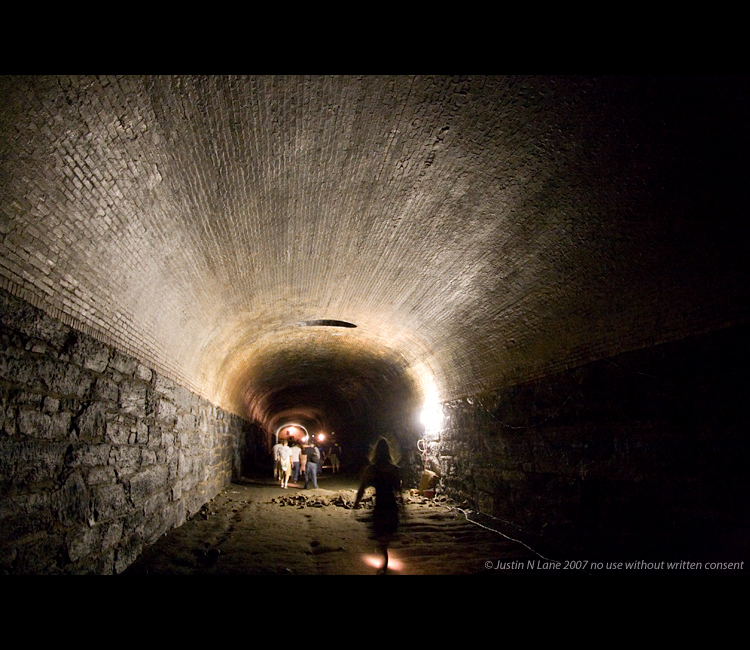 A group tours the tunnel 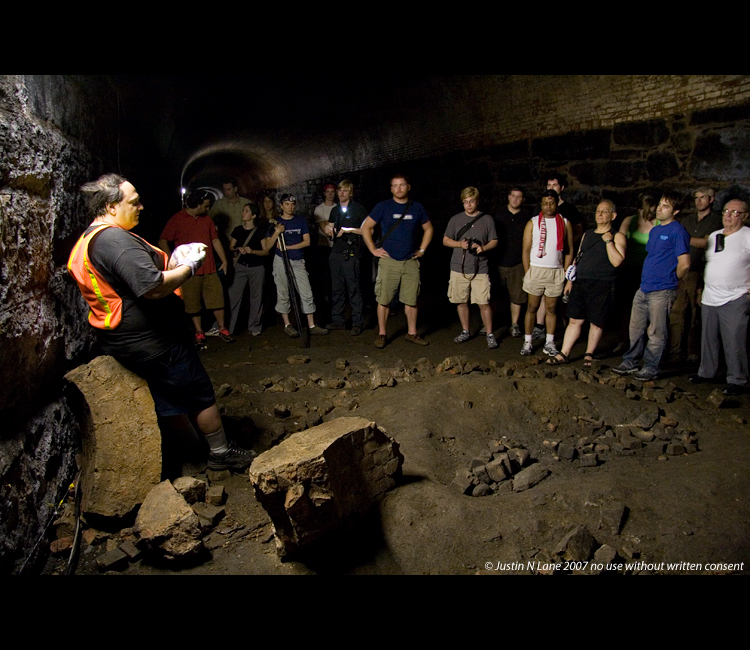 Built in 1844, the Atlantic Avenue Tunnel, also known as the Cobble Hill Tunnel, was meant to be the last step in connecting Boston to New York by rail. The tunnel, which was completed decades before the Brooklyn Bridge was built, was something of an engineering feat for its time and is reportedly the world's first subway tunnel. The tunnel was built to avoid the congestion caused by a street-level train, but satisfied the desire of investors to develop the area. Atlantic Avenue was an extremely busy artery in the city, with the Brooklyn and Jamaica Railroad (later the Long Island Railroad) running the length of it. Trains at the time often required several city blocks to come to a complete stop, which meant that pedestrians and wagons were routinely hit. Cornelius Vanderbilt, owner of the railroad, decided to build a line below ground level which would put a stop to pedestrian accidents and also ensure that the trains were on time.

Construction on the tunnel began in May of 1844. Using only hand tools and built almost entirely by Irish immigrants, the tunnel was completed in December of that year. Among the many legends surrounding the tunnel is the story that during its construction, a British contractor informed his largely Irish Catholic workforce that they would have to work on Sunday and skip going to mass. One worker became so enraged that he pulled out a pistol and fatally shot the contractor. According to legend, the workers walled the man's body up inside the tunnel, where it presumably still remains.

The tunnel was operational for only sixteen years. Political shenanigans led to its closure in 1859 or 1860 when Brooklyn banned steam locomotives within city limits. The tunnel was ordered filled in and closed off. Unbeknownst to city officials, however, the man hired to fill the tunnel only capped the ends, leaving defunct railroad tunnel largely intact, if mostly forgotten.

As is often the case with disused and mostly forgotten places, the tunnel spawned many legends over the years. There were the obligatory stories of massive, tunnel-dwelling rats; during Prohibition, stories flourished of bootlegging and mushroom-growing in the tunnel, and during World War II, it was rumored to be a hideout for Nazi spies.

In 1980, an engineering student named Bob Diamond, who knew a bit about the tunnel, climbed down a manhole and broke through a brick wall, revealing the long-forgotten tunnel. The tunnel became Diamond's life's work; he led tours into the tunnel for many years and founded the Brooklyn Historic Railway Association in 1982 to promote and preserve the tunnel. At one time, there was talk between Diamond and city officials of opening a museum in the tunnel. Along the way, Diamond and other preservationists got the tunnel added to the National Register of Historic Places.

In 2010, however, the Department of Transportation halted the tours and the city once again ordered the tunnel closed. Diamond sued the city for breach of contract and lost, and as of this writing, the tunnel remains closed to the public.

Seymour , Ann. The Light at the End of the Tunnel that Never Goes Out , Bklyner. October 2nd 2018. Accessed December 2nd 2019. https://bklyner.com/the-light-at-the-end-of-the-tunnel-that-never-goes-out/.