The very first sit-in demonstration in the state of Mississippi took place at the Jackson Municipal Public Library on March 27th, 1961. At the time, this large central library served only white patrons. The arrest and subsequent trial of the nine college students involved (dubbed the Tougaloo Nine), as well as the violent police response, received press coverage on both local and national levels. This first sit-in demonstration started a wave of protests across the state, including the well-known Woolworth's sit-in. It also led to a class action lawsuit, brought by the NAACP, that effectively forced the desegregation of the Jackson-Hinds county public library system, and library systems throughout the state. 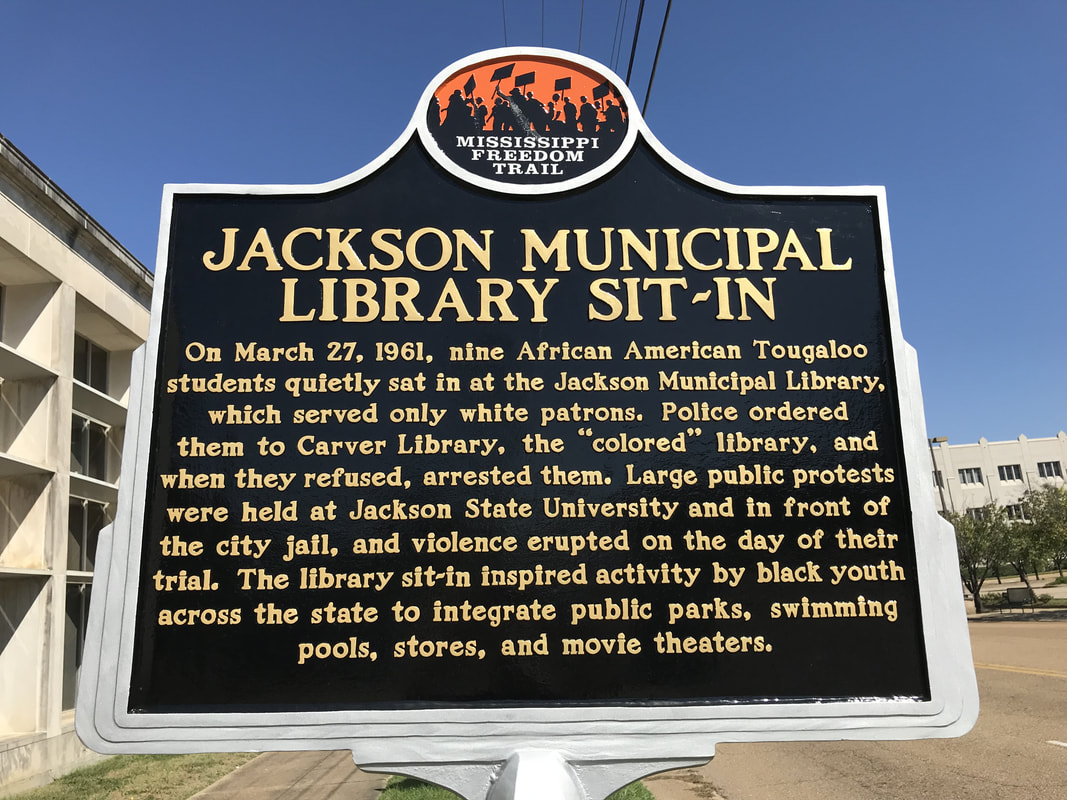 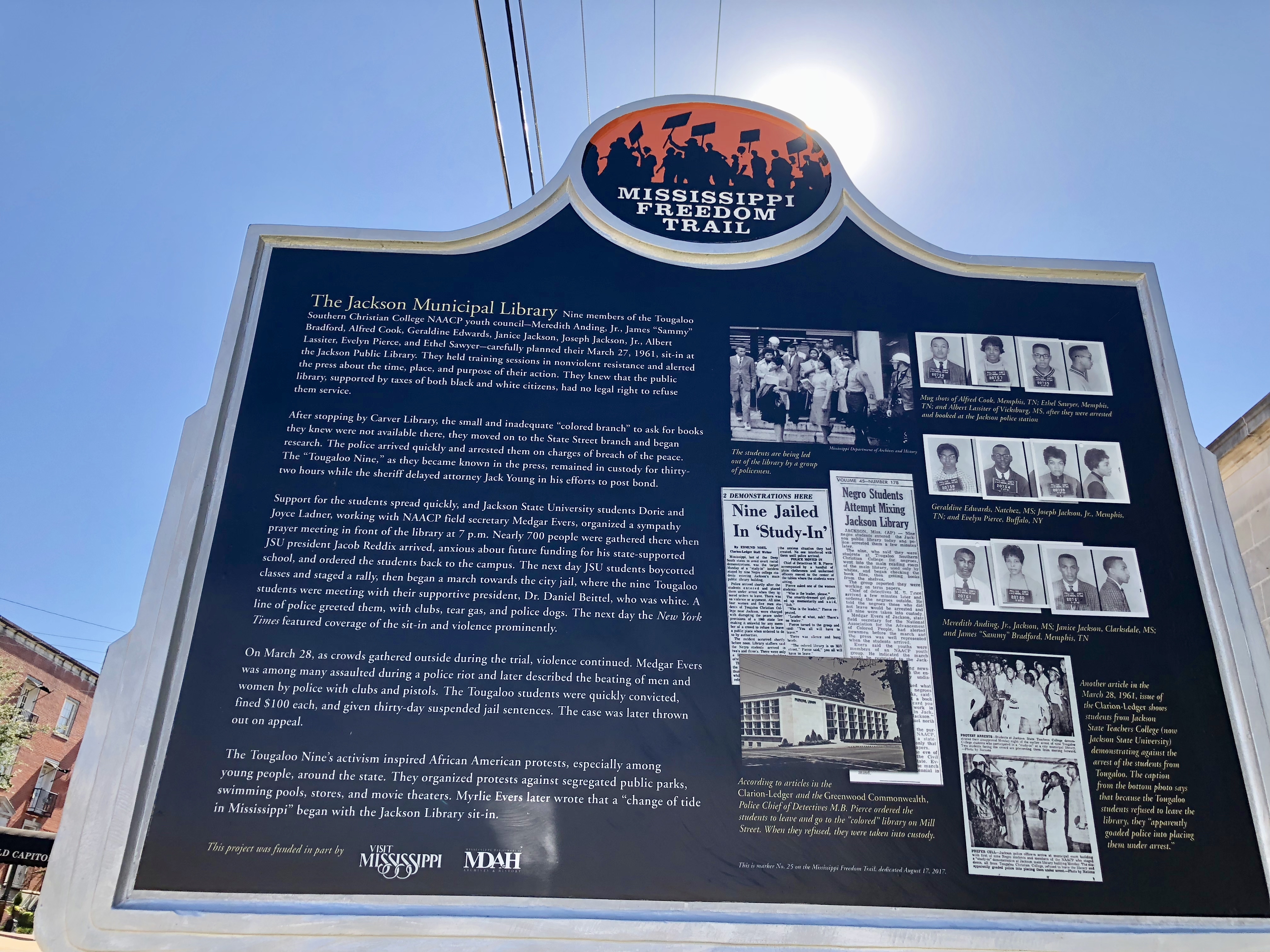 Close-up of photos on rear of marker (2017). Used per source's fair use policy. 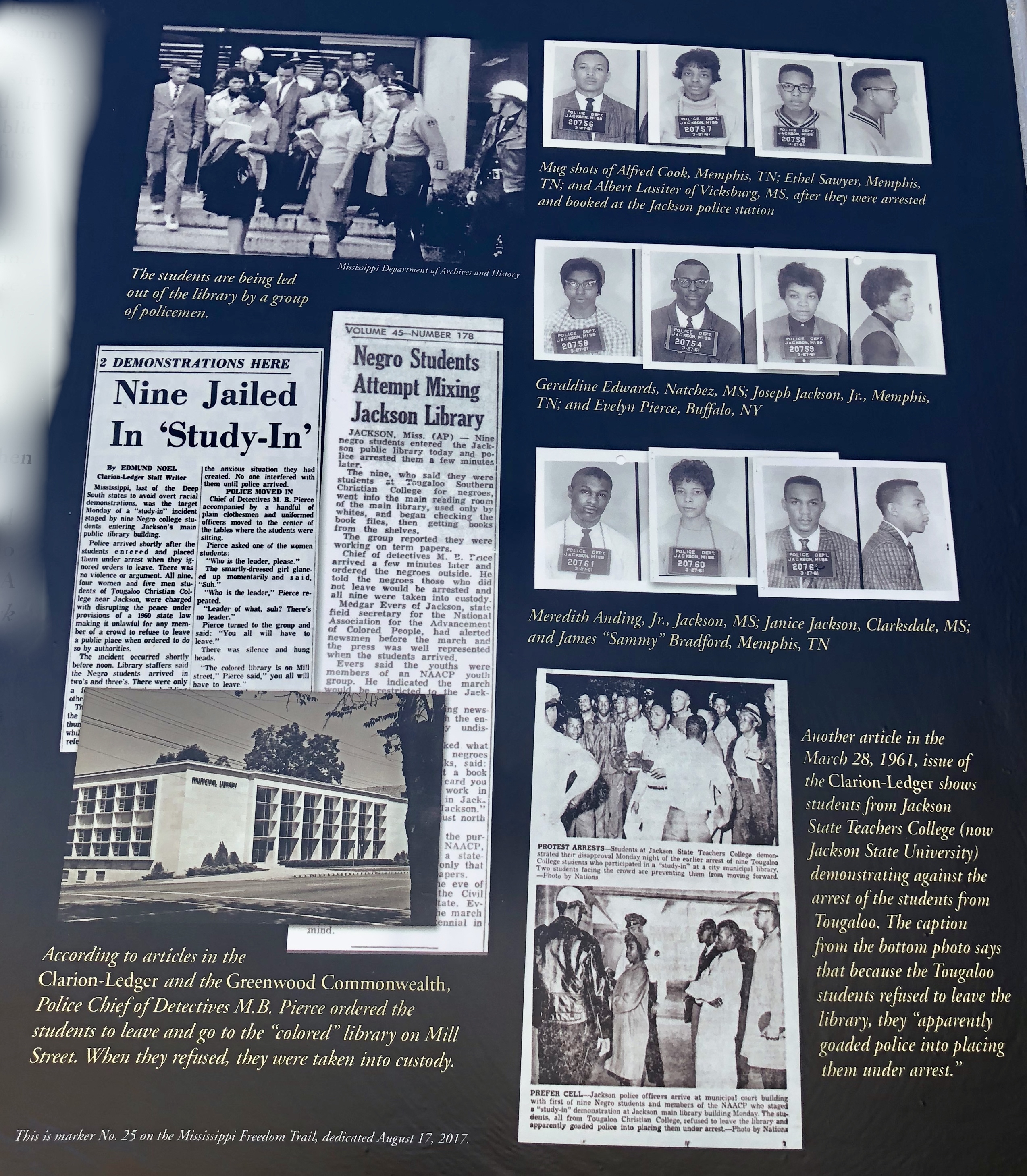 Historical marker in situ (2017). Used per source's fair use policy. 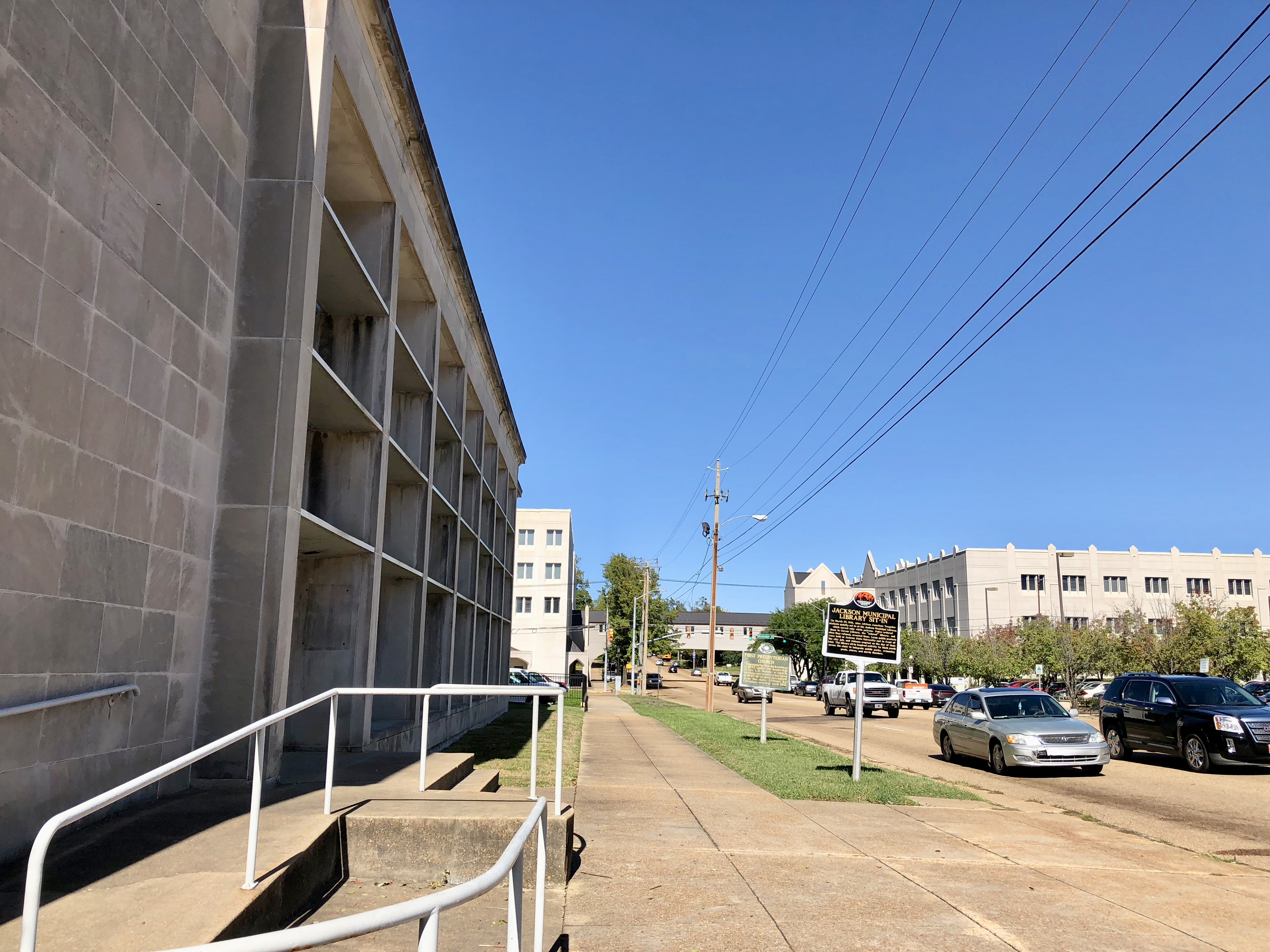 Though the Woolworth’s lunch counter sit-in is arguably more well-known, the very first sit-in demonstration in the state of Mississippi actually took place at the Jackson Municipal Public Library on March 27th, 1961 (Fultz 2006). Nine students at Tougaloo Southern Christian College (now Tougaloo College) participated in the sit-in, though more students were involved in planning the demonstration, and on the day of, as look-outs (Eberhart). These nine students, four women and five men, were dubbed the "Tougaloo Nine:"

On the morning of March 27th, the nine students first went to what was then the Black George Washington Carver branch and requested books that they knew were not available there. They then walked to the Jackson Municipal Public Library, which only served white patrons. Some of the students began using the card catalog and seating themselves at tables. One of them, Joseph Jackson Jr., president of the NAACP Youth Council at Tougaloo College, decided to approach the circulation desk and request a book. The library assistant yelled at him, “You know you don’t belong here!” and “You go back to your library!” (Wiegand 2018).

The library’s acting director, Frances French, first called the police, then approached the students, asking them to leave the library and go to a “colored branch.” The police then arrived, and ordered the students to leave. When they refused, they were placed under arrest, taken to the police stating in squad cars, and charged with breach of the peace. They were booked into the county jail and held on a $500 bond, which none of them could pay. (Wiegand 2018)

That afternoon, a group of Tougaloo students that had heard about the arrest tried to bring their schoolmates small bags of food. When authorities would not allow the students to visit their jailed schoolmates, the students “bombarded police headquarters with bags of food and cookies for the prisoners” (Creswell 1996). Also that day, students at the state-funded, Black-attended Jackson State College (now Jackson State University), working with NAACP field secretary Medgar Evers, organized a prayer vigil in protest outside their campus library, which was disbanded by the college president, who feared losing state funding (Hilton 2017).

The next day, March 28th, a group of Jackson State students boycotted classes and marched toward the city jail, but their march was broken up by police. Several blocks away, hundreds of white people marched through the city streets under a large Confederate flag. Meanwhile, supporters of the jailed students gathered outside the courthouse in a show of support. When the students arrived for trial, the crowd began to applaud, and at this point the police set upon them with clubs and dogs. Several people, including women, children, and Medgar Evers himself, were pistol-whipped and required stitches. Two Black ministers were bitten by police dogs, and an 81 year-old man had his arm broken in a beating by police (Wiegand 2018). The students had to spend a second night in jail, and the trial did not begin until March 29th. On the evening of March 29th, 1500 people attended a mass meeting organized by the NAACP to protest the police brutality (Wiegand 2018).

At their trial, the Tougaloo Nine were found guilty of a breach of the peace and fined $100 each. Their 30-day jail sentence was suspended on the condition that they “participate in no further demonstrations” (Wiegand 2018). This sit-in and its aftermath inspired a wave of protests around the state. A subsequent lawsuit on behalf of the Tougaloo Nine pushed the public library system into integration.

On January 12, 1962, NAACP attorneys field a class-action lawsuit on behalf of the library protesters (though none of the Tougaloo Nine were actually named as plaintiffs). The lawsuit challenged Mississippi segregation statutes, and claimed violations under the Fourteenth Amendment and civil rights statutes. In a somewhat complex decision, the judge in the case decided in favor of the plaintiffs, while also arguing that the defendants, Jackson city officials, did not intentionally violate the law in encouraging “voluntary separation of the races” (Wiegand 2018). Although the judge refused to enter an injunction against the defendants, this decision served as a signal to the state of Mississippi and the public that segregation of public institutions could not continue, and the public library system quietly desegregated shortly thereafter (Wiegand 2018).

This historical marker is part of the Mississippi Freedom Trail, and was dedicated in August of 2017. The Jackson-Hinds library system raised the money to create and install the marker, and some of the living members of the Tougaloo Nine were present at the dedication. The original library building is still standing, but is no longer owned by the city, and is not currently in use (Hilton 2017). Jackson's current central library, the Eudora Welty branch, is located across the street from the marker.

You can read a transcription of the full text on the front and rear side of the marker online at the Historical Marker Database entry for the site, linked here and below.

Because the local NAACP members had contacted the press as part of planning the demonstration, there is TV news footage of the sit-in at the library, and portions of the arrest. The Mississippi Department of Archives and History recently discovered a copy of this footage, and used it along with numerous archival photos and news articles to produce a video presentation about the Tougaloo Nine, linked here and below.