A giant baked potato? An ugly monstrosity? A triple-layer silver-frosted cake? A spaceship? Call it what you will, the Markel Building has a distinctive appearance that will make you look twice. Dubbed one of the world's 10 ugliest buildings, it was constructed from 1962 to 1966 as the headquarters of an insurance company. The exterior is clad in alternating bands of aluminum and recessed glass windows. The aluminum sheets are hand-hammered and over 555 feet long - if stood on end, that would be taller than the Washington Monument in D.C.! The structure was listed on the National Register in 2017 and is one of only two buildings (and the only surviving) designed by experimental architect and Virginia Commonwealth U. professor Haig Jamgochian.

Photograph of the Markel Building (Jim of Richmond 2014) 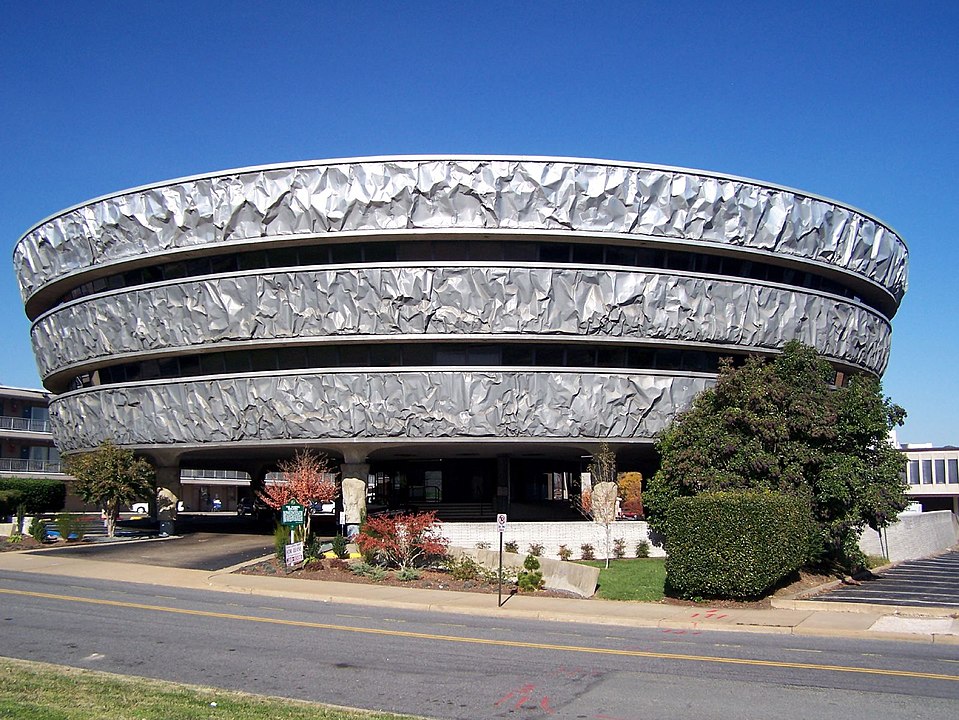 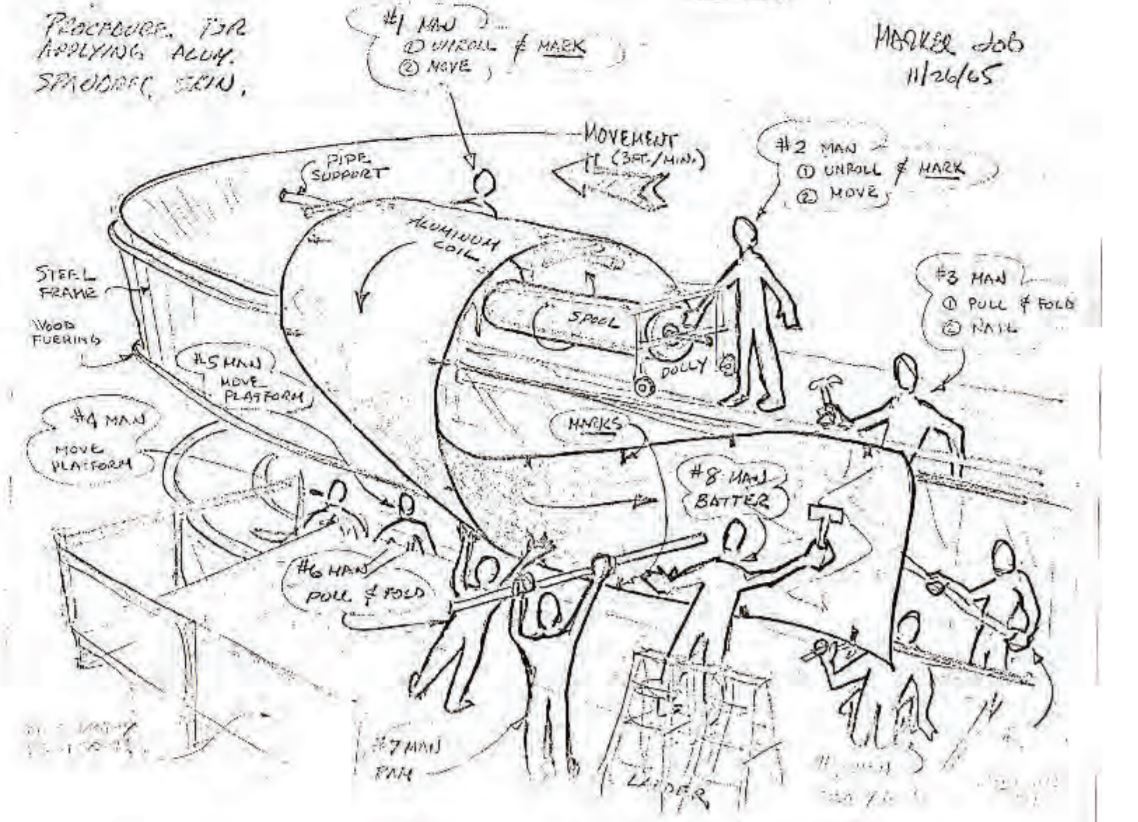 The Markel Building is not your typical structure, no matter how you look at this multi-story aluminum-clad building. Commissioned as an office building by the Markel Insurance Corporation for its headquarters in 1962, architect Haigh Jamgochian envisioned a round, shiny structure to reflect the fascination of the era with all things Outer Space.

The Neoexpressionist building is notable for its sloping walls, alternating bands of metal cladding and glass windows, and crisp, horizontal lines. Since the Reynolds Metals Corporation (of aluminum foil fame) was a Richmond company, the shine was achieved by cladding each of the three circular stories with aluminum supplied by the company (now Alcoa). The cladding is said to have a total length of almost 700 feet. If stood on end, the cladding would be taller than the Washington Monument ("only" 555 feet) on the Downtown Mall in Washington, D.C. That's a whole lot of aluminum! Jamgochian wasn't satisfied with a smooth surface for the cladding so the aluminum was hand-hammered into crinkles or peaks and valleys, while in place! No wonder it took four years to complete. Although most say the design looks to have been inspired by a foil-wrapped bake potato served to the architect at an American Institute of Architects (AIA) dinner, it doesn't look that far off from a moonscape either. The first floor is a parking deck interspersed with a dozen concrete pillars supporting the building.

Jamgochian was the Richmond-born son of Armenian immigrants, he served as a U.S. Marine during World War II in the Pacific. Taking advantage of the G.I. Bill, upon his return he studied architecture at Dartmouth College, Virginia Polytechnic Institute, and Princeton University before working in the Baltimore office of architect Luicius Read White, Jr. Jamgochian became a professor at Richmond Professional Institute (now Virginia Commonwealth University [VCU]) in Richmond but was unsuccessful at establishing a school of architecture.

The experimental architect became infamous when he requested permission to build his self-proclaimed "Tree House" in Richmond. A mock-up photograph of the proposed building was picked up by the Associated Press. Although Jamgochian did not receive a variance permit from the city to build his dream house on West Franklin Street, he received dozens of letters inquiring about the project from readers worldwide. The attention generated by the Tree House plans caught the eye of two men who were running the insurance business that their father had established in the 1920s, Lewis and Irvin Markel. After the Markel's hired Jamgochian, the initial design was of mushroom-shaped pods with a price tag of one million dollars. The budget was cut in half, and Jamgochian came up with the current design.

Although Jamgochian had plans for other buildings, he only ever had time and financial backing to complete one additional building: a crescent-shaped home on the south banks of the James River in the city, clad in metal and glass, and following the bends of the riverbanks. Called by Jamgochian the "Moon House," the home was built for a flamboyant local car dealer in 1967 to 1968. Since the home has recently been destroyed, the Markel Building remains as the only standing structure of this architect.

The Markel Building has the distinction of being one of the "World's 10 Ugliest Buildings" as decided in 2009 by Digital Journal. The structure was listed on the National Register of Historic Places in 2017. Richmond Magazine counts the Markel Building as one of the 75 most important buildings in Richmond. Plus, it was named one of 16 cool and unusual things to see or do in Richmond by Atlas Obscura. Take that, Digital Journal!