Lone Elm Campground was used as a resting point by early travelers on the Santa Fe, California, and Oregon Trails. The site was conveniently located near Cedar Creek and provided water, firewood, and a grassy camping spot. The single elm tree from which the site got its name was noted as a landmark by many travelers in their diaries and memoirs. A historical marker, erected in 1906, marks the location of the campground, and the wagon swale can still be seen today. The site has been preserved as Lone Elm Park, managed by the City of Olathe, which provides recreational facilities and educational panels for visitors to learn more about the history of the area. 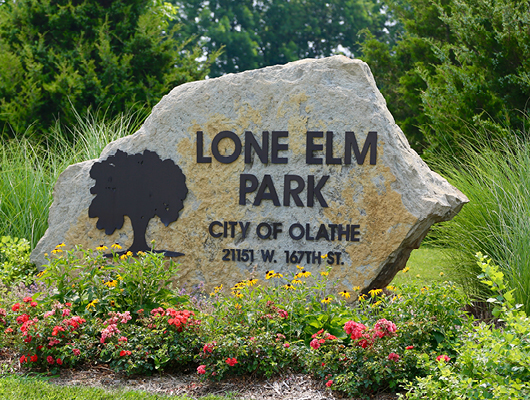 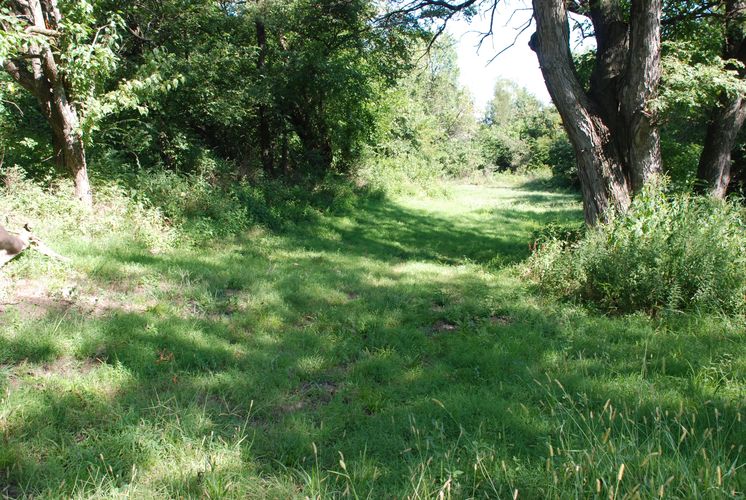 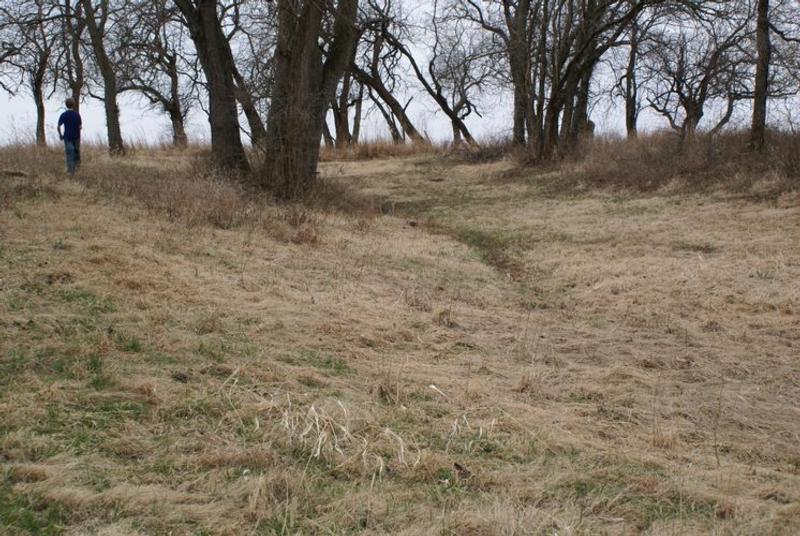 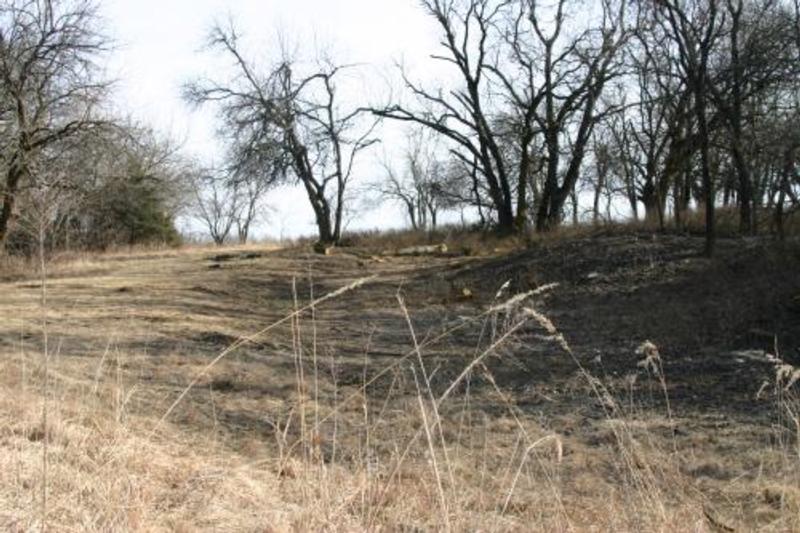 The DAR marker erected in 1906 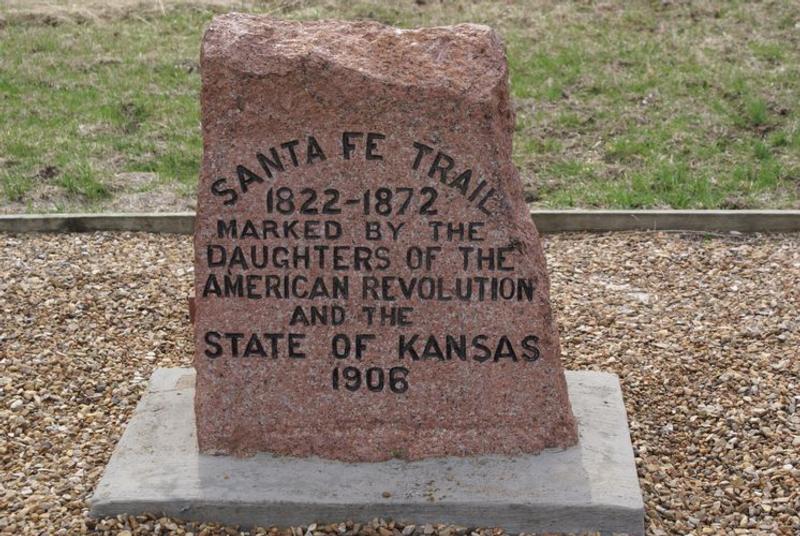 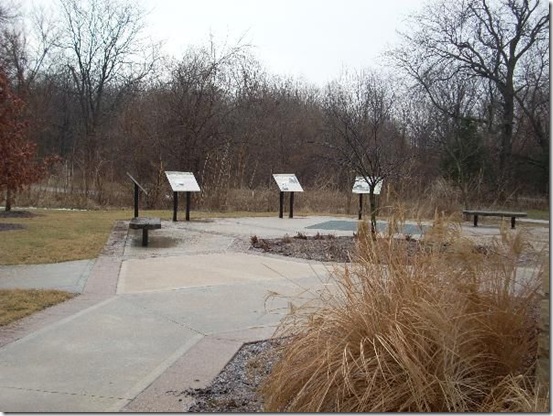 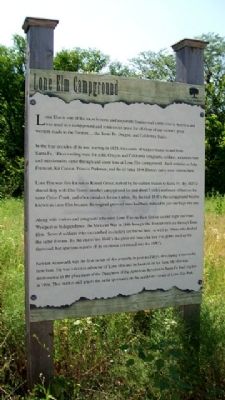 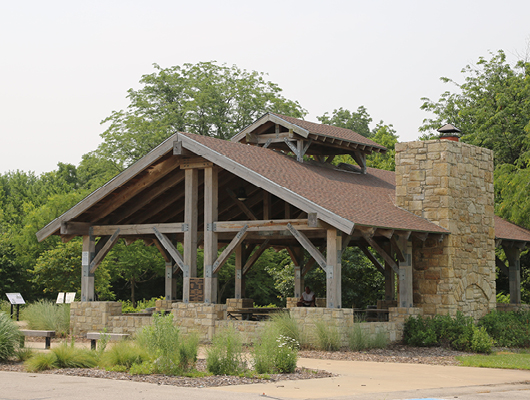 A bird's eye view of the park

Lone Elm Campground Swale has been a place of significance since the first known pioneers passed by it in 1823. The swale was located along the Three Trails Corridor, a section shared by the Santa Fe, California, and Oregon Trails before splintering off in different directions. The earliest use of the trail was as an international trade route to Santa Fe, which was in northern Mexico at the time. Later, the corridor also marked the beginning of a 2,000-mile journey for pioneers and gold spectators to the Pacific coast.

Many of those travelers mentioned Lone Elm Campground in their daily journals and in correspondence. Initially called Round Grove, the idyllic spot offered travelers a grassy place to rest and gather water from Cedar Creek after their first day on the trail. It was called Round Grove for the many trees that were collected as firewood. As the trails and the campground became more popular, the grove eventually dwindled down to only one tree on the empty prairie, hence the name Lone Elm. In 1846, one traveler described the campground in her diary:

There is no other tree or bush or shrub save one Elm tree, which stands on a small elevation near the little creek or branch. The travellers allways [sic] stop where there is water sufficient for all their animals. The grass is fine every place, it is so tall in some places as to conceal a man's waist. We crossed the branch and stretched our tent. [1]

By 1857, the elm was reduced to a stump, and the Santa Fe, California, and Oregon Trails were to meet a similar fate. The trails gradually went out of use when improved alternative routes were constructed, and pre-Civil War skirmishes between Kansas and Missouri residents deterred travelers from passing through. The opening of the Transcontinental Railroad in the 1869 brought in a new era of travel by rail rather than by wagon. The Daughters of the American Revolution erected a pink granite historical marker at the spot to commemorate the significance of Lone Elm in the history of westward expansion. An elaborate unveiling ceremony and program were held on November 9, 1906. [1]

Archaeological excavations at the site have uncovered some artifacts from the time period when the trails were in use, although none could be definitively tied to camping pioneers. [1] Only one remaining portion of the wagon swale is defined enough to view. Three hand-dug water wells that were constructed in the late 1800s remain as well. [2] Urban sprawl has threatened other existing portions of the trails, and so the Lone Elm Campground Swale is one of the only remaining parts of the trails in the metro area. [1] In 2004, the Lone Elm Park was dedicated, with 155 acres containing soccer and baseball fields, picnic shelters, a walking trail, and historical information panels. [2]