Mary Jane Patterson made history for being the first African American woman in history to graduate from an American post-secondary institution with a bachelor’s degree, in 1862. Born to a free family, she graduated from Oberlin College in Ohio, a liberal arts university that was one of the first universities to be co-educational and open to students irrespective of race. She was also the first African American principal at a preparatory high school in Washington, DC. Though this achievement, Mary Jane Patterson paved the way for future women of colour and for African Americans. Her example highlights the importance of Oberlin's antislavery culture, and the importance of women in the vanguard of antislavery educators on both sides of the Canada/US border.

Mary Jane Patterson Original and Photocopied Graduation Photograph from 1862. This photo is available in the Oberlin College Archives. 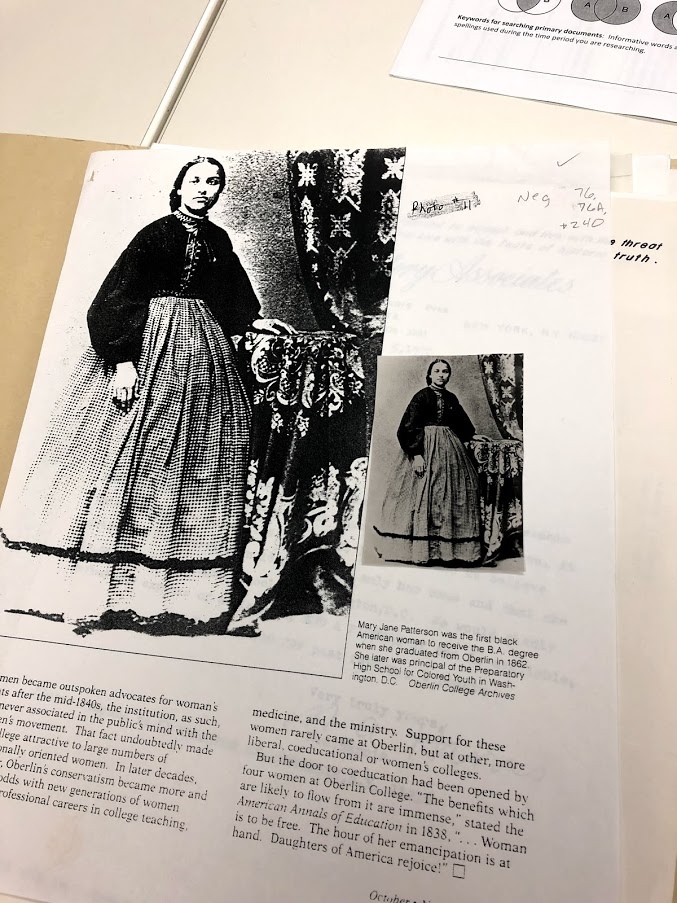 Original letter written by Lucy D. Slowe to George Morris regarding Patterson's graduation status. This letter is available in the Oberlin College Archives. 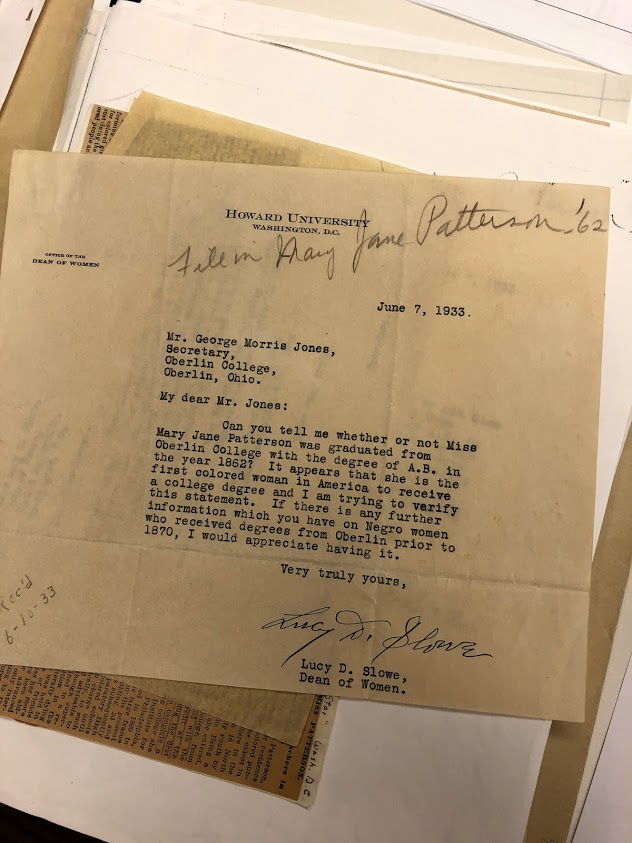 Letter written by George Morris proving the status of Patterson's graduation. This letter is available in the Oberlin College Archives. 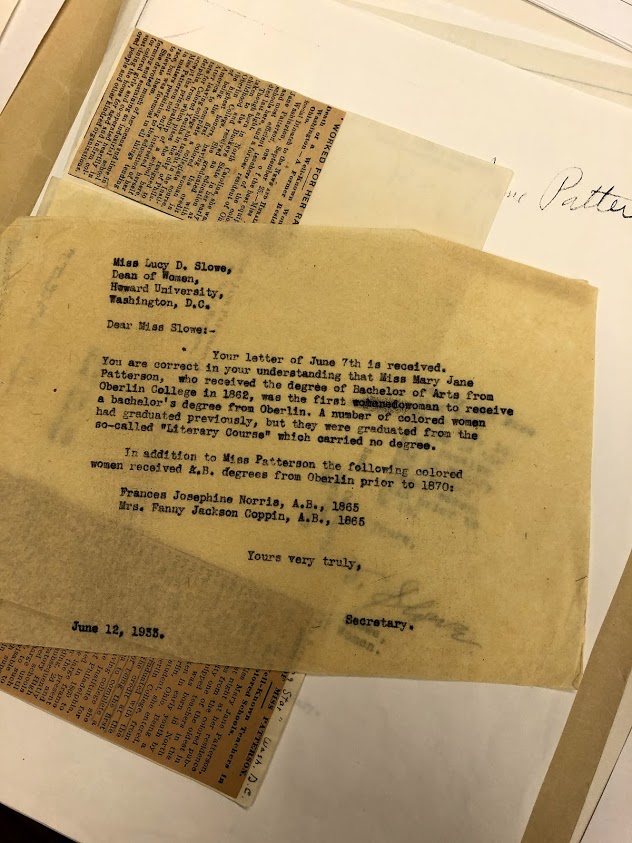 This is a monument found in Oberlin College depicting the Underground Railroad which signifies the importance of abolition and the anti-slavery movement in Oberlin, Ohio. 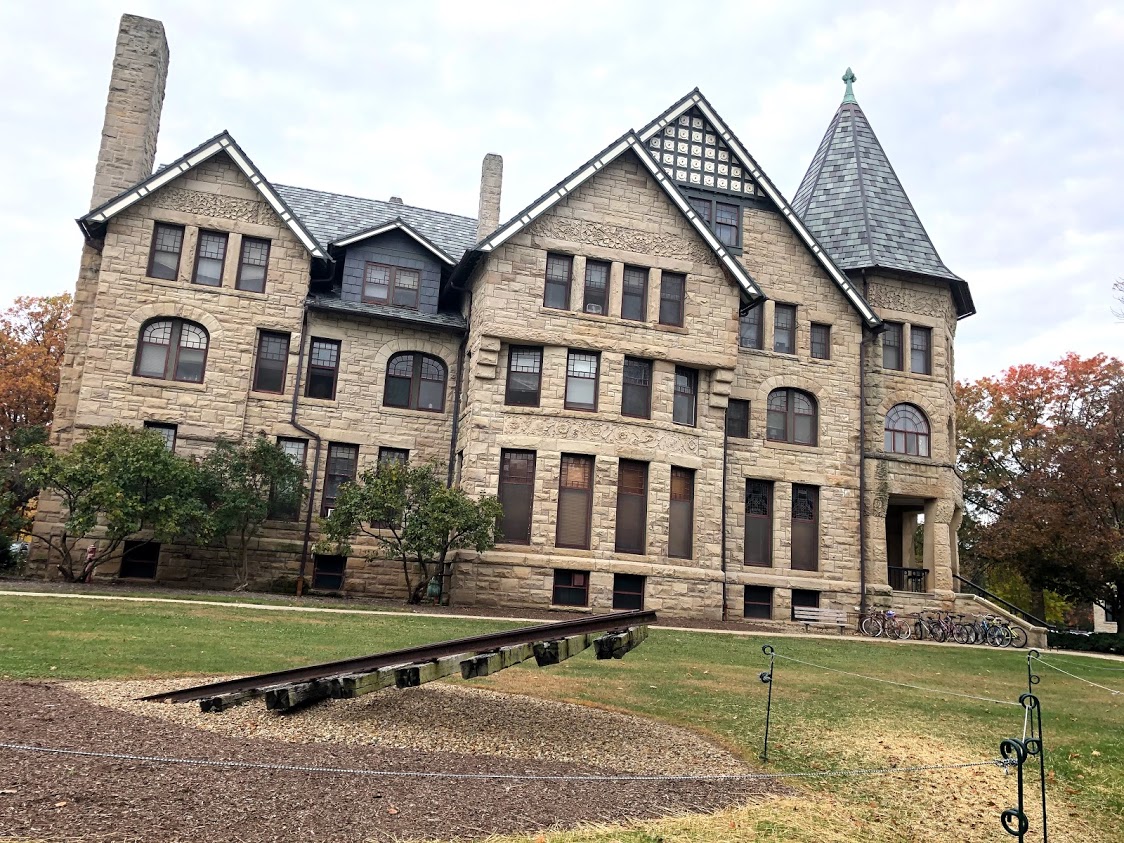 Oberlin College opened in 1833. During this time, only white men could attend in order to obtain an education; two years later, the college allowed African Americans to enroll. Oberlin became a centre for abolitionist reform and education, and was tied to the Underground Railroad, an informal network of assistance for freedom seekers escaping enslavement. [1]. However, the admission of Black students appeared to be more controversial than John Jay Shipherd, a founding evangelical minister of Oberlin College, had anticipated. Although he was not an activist for racial equality initially, Shipherd felt strongly about his views about integration in the school and he suggested that ‘he might discontinue his association with the college if qualified students were rejected simply because of their colour’ [2]. With many disagreements over the matter, Oberlin College finally made the radical decisions to enroll African American students.

Women were not allowed to enroll at Oberlin College until 1837, when the College became the first post-secondary institution in the country to be co-educational [3]. Women in the 19th century, were already viewed as inferior to men when it came to intellectual abilities [4], but much like African Americans, Oberlin College granted these women an opportunity to shatter the stereotype. Most women were enrolled in the ‘ladies’ or “Literary” course, which was primarily a two-year program and did not carry a degree [5]. However, there was a woman who refused to take the ladies’ course and insisted on enrolling in the four-year Bachelor of Arts program named “the gentlemen’s course [6]”.

Patterson first came to Oberlin in the 1840s with her family. At the time of their arrival, Oberlin was known as an abolitionist town with a large and strong Black population, which made settling easier for her family [7]. Once she enrolled at the ‘gentlemen’s course’ at the college, she studied very hard to learn classes such as Latin, Greek, and Mathematics, all courses not typically taken by women. In 1862, she graduated with high honours with her Bachelor of Arts Degree and immediately applied to become an educator. Even after her success, Patterson was still questioned if her degree was legitimate. Letters between Lucy D. Slowe, the Dean of Women at Howard University in Washington, DC, and George Jones, the secretary of Oberlin College in 1933, suggest Slowe’s desire for confirmation as to whether or not Patterson was the first African American woman to graduate with a B.A. (see Images 2 and 3). Many were surprised to learn of such an accomplishment from an African American woman and she continued to succeed even after her graduation.

In 1864, Patterson applied for a teaching position in Norfolk, Virginia, at a school consisting of all Black children. Here she found tremendous success with the administration members which claimed that, “The ladies’ experience in public speaking and elocution at Oberlin were reflected in their teaching” [8]. E. H. Fairchild, principal of Oberlin College’s preparatory department wrote a recommendation letter for Patterson which requested an “appointment from the American Missionary Association (AMA- a non denominational society that worked to develop educational opportunities for Black and other minorities [9]) as a teacher among freedmen” [10]. She was beloved in Virginia, even after she applied for a position to teach at the Preparatory High School for Coloured Youth in Washington, DC (now known as Dunbar High School). This was the same institution in which she became the first African American principal for.

On September 24, 1894, Patterson died in her home in Washington, DC [11]. She spent her entire career working to provide a proper education for coloured children by offering them the same opportunity that Oberlin College gave her. Outside of teaching, she also devoted much of her time to forming an industrial school for girls of her race [12]. Mary Jane Patterson stands for everything Oberlin College attempted to do when they made the radical decision to enroll not only African Americans, but women into their college, as well. The college was a haven to the recently freed or fugitive slaves; the new students were able to receive a proper education to obtain a real occupation in which they were passionate about. Their progressive decision in 1835 gave them the honour of being one of the cities filled with abolitionists and a strong partner of the American Missionary Association.