The Old Hammill Hotel is probably the oldest brick building still standing in the historic town of Occoquan. It was probably built around 1830. The Hammill family were likely the fourth owners of the property, from 1866 to the early twentieth century. The Hammill's lived in a home on a farm outside of town and also ran a local shipyard. One of their descendants has written a book on the family's history, from Scotland to Virginia. The hotel building was the headquarters of a Confederate colonel, Wade Hampton, in the first winter of the Civil War, from 1861 to 1862. In 1905, a robbery and assault of a hotel guest while in his room made the news. The building was converted into apartments on the upper two floors in the mid-twentieth century and houses commercial space below. The building is a contributing resource in the NRHP-listed Occoquan Historic District, an easily-walkable area.

1905 newspaper article re: robbery and assault on hotel guest at Hammill Hotel 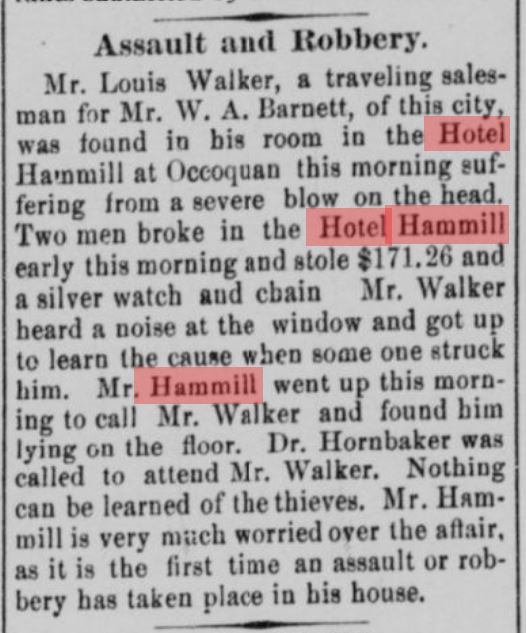 The Old Hammill Hotel may be the oldest brick building still standing in Occoquan. The structure, on the corner of Commerce and Union streets, was probably built around 1830 by Joseph and John H. Janney on one of the town lots they owned. A tavern may have occupied the building in the 1830s, run by Silas Beach, the next owner. John Athey purchased the building from Beach.

Hugh Hammill and his eldest son, Edward, are two men who operated the hotel which came to bear their name. Hugh Hammill acquired the building from John Athey through inheritance in 1866. The recently-widowed Hugh Hammill (Jane died in 1865) lost his home near town, named River View, to fire in 1866 and purchased a farm outside of the town in 1868, according to articles in the Alexandria newspaper. A son of Hugh once told a daughter-in-law that the home in which he grew up had 14 fireplaces; the home contained luxury items including a grand piano. A Hammill descendant has written a book about the family's history, from Scotland to the U.S. (Matthews 2010). The Hammill family also operated one of two shipyards in Occoquan along the riverfront. Hugh Hammill built a three-masted ship named the Martha Washington; the longboat was especially designed to carry lumber. Hammill sold the ship, which could hold 60 cords of wood, in 1868 to someone who planned to use it for trading along the Potomac River ports. His wife and daughters would take one of the family's boats and sail up the Potomac River to shop in Alexandria. It sounds like Hugh did not live at the hotel, so perhaps a son or an employee physically ran the operation. Hugh was referred to as "Captain Hugh Hammell" in an 1875 news article, reporting that he had fallen through a bridge at Occoquan into a creek and nearly drowned.

The Hammill's may have called the hotel "Commercial House" in the 1870s. One of several hotels in the town of Occoquan, the Hammill Hotel may have been the nicest. The stagecoach stopped in Occoquan, using a bridge first built across the Occoquan River to Fairfax County in 1797, providing a land route from north to south between Richmond, Virginia and Washington, D.C. During the Civil War, the hotel became the headquarters of Confederate Colonel Wade Hampton in 1861 to 1862.

Nothing too exciting is associated with the hotel, but it was the scene of a robbery and assault in 1905. A Mr. Louis Walker, a traveling salesman out of Alexandria, was attacked by an unseen assailant and robbed of nearly $175 and a silver watch and chain. The wounded victim was found lying on the floor of his hotel room the next morning by Mr. (Edward) Hammill. The hotel owner stated that nothing like this had ever happened before at the establishment.

In the early twentieth century, Arthur Gardner bought the hotel from Edward Hammill, re-naming the business the Gardner House. The hotel building was damaged but survived the fire that spread destruction across the town of Occoquan in 1916. The fire started in the Alton Hotel, the location of what may have been the earliest hotel built in the town, in 1804; the two buildings may have been confused with one another in some of the background research, but only the Hammill building survives. Gardner sold the property in 1927 and the structure became an inn. The hotel was converted to apartments in 1942 and was known as the Beechwood Apartments in the 1960s. The building currently houses a jewelry store (Lil Bit of Posh) on part of the ground floor with two levels of apartments above.

The Old Hammill Hotel building is a contributing resource in the Occoquan Historic District, listed in the Virginia Landmark and National Registers in 1983.