Found on Church Street, the first public cemetery was created by George Wigant in 1806, and the first tombstone was placed in 1823 to the memory of James Roe. The second settler of the town, John M. Frank, eight Revolutionary soldiers, and a veteran of the War of 1812 can also be found here. Directly next to the cemetery there are the Old Churches of Virgil which were erected in 1875. This particular site is important because it shows the history of the area and marks the location of early settlements in the area. 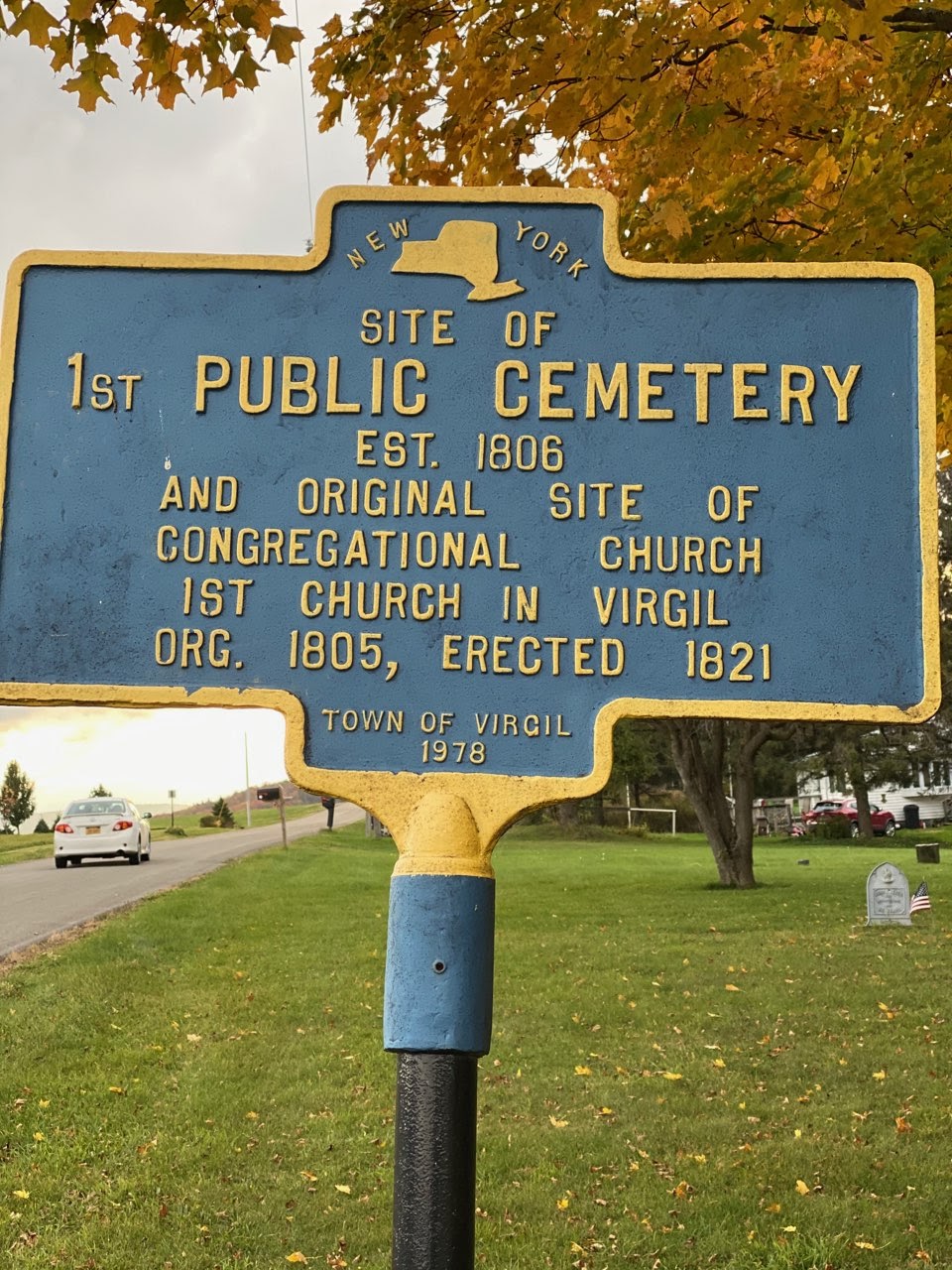 The earliest settlements of Virgil, New York were between 1792 and 1804. Multiple denominations of religions were seen in the early years, including Baptists, Methodists, and Universalists. Reverends Williston, Phelps, and Johnson represented Congregationalists; Roots, Whipple, and Cole for Baptists and Methodists all obtained success when attempting to form religious gatherings within the community. Each leader would hold their own gatherings at their own respective providence. The First Congressional Church was organized in 1805, and they built their church in 1821 across from the old cemetery. When originally built, there was no seating, but ten years later, in 1831, seating was added. The Virgil Baptist Church was organized in 1813 with about 30 members. In 1827, troubles arose within the church, and they decided to disband which was later resolved and a new building was built in 1832 at Virgil Corners. Popularity had grown so much by 1847 that a new building was required in order to fit the attendees. The new church cost $8,000 to build and was put together by a head carpenter, Byram Johnson. Many churches in the area of Virgil have been built over the course of history, but sadly, not many remain.

The first public cemetery is placed right on the spot where the original church was built in 1821. The most eye catching tombstone is the tombstone of Jonathan Edwards who was born January 14th, 1769 and died on April 2nd, 1845. This particular tombstone is not in great condition, having a massive crack down the center. Buried in the same cemetery are many of the family members of Jonathan Edwards, including Lucinda Edwards, the eldest child of Jonathan, William Edwards, the youngest son, Harriet, the youngest daughter, and Lydia Edwards and Sally Marcia, the children of Harriet. John Michael Frank, who has his own marker not too far is also buried at this cemetery. This particular spot within Virgil, New York holds a lot of historical importance and has roots that trace all the way back to the late 1700's. Important figures involved in religious affairs within the community can be found buried in this open and interesting piece of land.

As We Were, Virgil Historical Society, 1979.