Jarvis Hall is a suite for students at Trinity College. It is one of three buildings that make up the long walk which was completed in 1878. The suites contain doubles, singles, bathrooms, and study areas. The building is one of the oldest structures on campus. The hall is 286 feet long, 35 feet wide, and 3 stories high and is divided into 7 entry ways in order to prevent fires.

A view of Jarvis Hall from the Long Walk 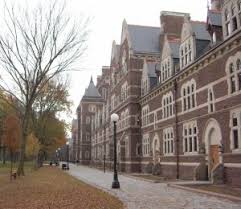 In the Spring of 1872, Trinity College was forced to move campus'. The Longwalk is a collection of three buildings, Jarvis, Northram Towers, and Seabury which were constructed on Trinity Gallows Hills after they were forced to move. The college did not want to waste time and money on rebuilding entire building which is why the school hired an English architect, William Burges, to renovate a new campus which featured the long walk. Burges Specialized in High Victorian Gothic style architecture and promised to build "nothing less than one of the most extensive university buildings of the present day." Jarvis Hall was the first building in the long walk to be completed in 1878. The hall cost around $400,000 to build which increased tuition and decreased the presidents salary. It was built to be a dormitory which is still its use today. Jarvis Hall is named after Abraham Jarvis who was the second American Episcopal Bishop of the Episcopal bishop of Connecticut. He was born in Norwalk, Connecticut and graduated from Yale.

The collection of three building including Jarvis that make up the Longwalk house 142 students, seven classrooms, four seminar rooms, and offices for professors and staff. The building underwent a 21st century renovation costing 33 million dollars due to an inspection in 2005 that revealed that iron cables important to the structure had rusted. Trinity College proceeded to conduct the largest renovation project the school has ever done to preserve the historical building. The dorms also lack sufficient lighting and air-conditioning. The project included stabilizing and reinforcing 88 stone dormers, restoring and replacing 1,200 windows, installing an new roof with 123,000 slate tiles and renovating the interior of the structure. Although the building underwent a massive renovation it still upholds its historical importance.