Located just 2.5 miles from Deadwood, Mount Theodore Roosevelt Monument is a historic stone tower serving as a monument to President Theodore Roosevelt (1858-1919). Roosevelt's long-time friend, Deadwood resident, and famous Western American figure Seth Bullock led the effort to build the tower, which was erected just six months after Roosevelt's death in January 1919. The tower, which stands 31 feet high, was the first memorial for Roosevelt built in the country. The site also features a picnic table and interpretive sign. Visitors can climb to the top of the tower, which was added to the National Register of Historic Places in 2005. 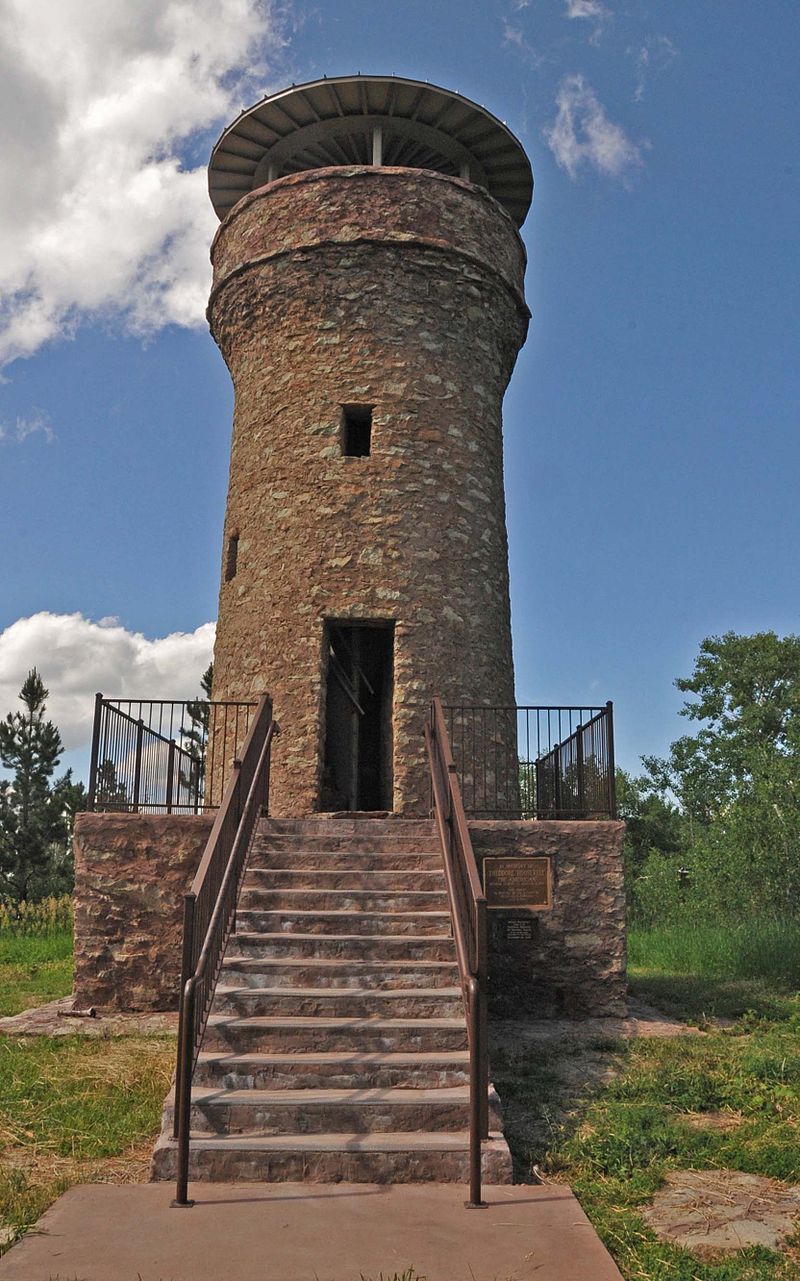 Seth Bullock led an interesting and productive life. He was born in Ontario, Canada in 1874, and grew up in Michigan. As a teenager, he ran way to Montana, where his sister was living, but soon returned to Michigan. In 1867, now as an adult, he moved to Helena, Montana, where he was elected to the Territorial Senate in 1871. He later became sheriff of Lewis and Clark County and then started to work as an auctioneer for businessman Solomon Star. They would remain friends and partners for the rest of their lives. Upon hearing the discovery of gold in the Black Hills, in 1876 they moved to Deadwood, which was just a lawless mining camp at the time. There, Bullock became sheriff once again and he and Star opened a hardware store. Bullock and Star would engage in many other business ventures in the coming years.

Eventually, Bullock also became a U.S. Marshal by the time he met Roosevelt in the mid-1880s. Roosevelt, who was deputy sheriff of Medora County, North Dakota at the time, had captured a horse thief whose nickname was "Crazy Steve." Apparently, it seems that Roosevelt and a couple companions were on a business trip and had happened to come upon Crazy Steve by accident. They apprehended him and were on their way to Deadwood to bring him to trial. It was on then that they met Bullock near his ranch. Bullock was initially wary of the group as they had looked quite disheveled. However, he and Roosevelt quickly became close friends.

When he was president, Roosevelt offered Bullock a number of positions, even Governor of Alaska, but Bullock preferred to stay in the Black Hills. Roosevelt appointed him U.S. Marshal for South Dakota in 1905, a position Bullock held for nine years, as well as Forest Supervisor for Black Hills National Forest.

Rosevelt's sudden death in January 1919 was a tremendous shock to Bullock. That same month, Bullock and a few others from Deadwood created the Roosevelt Permanent Memorial National Committee (which was later changed to Roosevelt Memorial Association). In the coming months, a site was chosen and the tower was designed and construction began. Workers completed by early July and a dedication ceremony was held on the 4th.