The Mary Wells Morris Statue in Wellsboro, Pennsylvania is a bronze, life-sized sculpture of one of the small town's founders. The statue was dedicated to the town in 2009 in honor of the life of the important woman it displays. It symbolizes the birth and the history of Wellsboro. Mary and her husband, Benjamin Wistar Morris, bought the land in 1806 and lived there until their death, making them Wellsboro's first residents. Historians believe that Benjamin named the town after his wife. Some people wanted to honor her in a special way, so they decided to have this sculpture built. There is a great deal of rich history behind the statue.

Inscribed on the statue are the birth and death dates of Mary Wells Morris--a co-founder of Wellsboro. 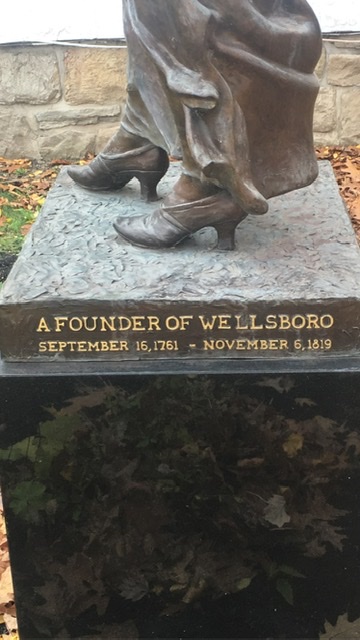 The commemorative statue stands at 120 Main Street in Wellsboro, Pennsylvania. 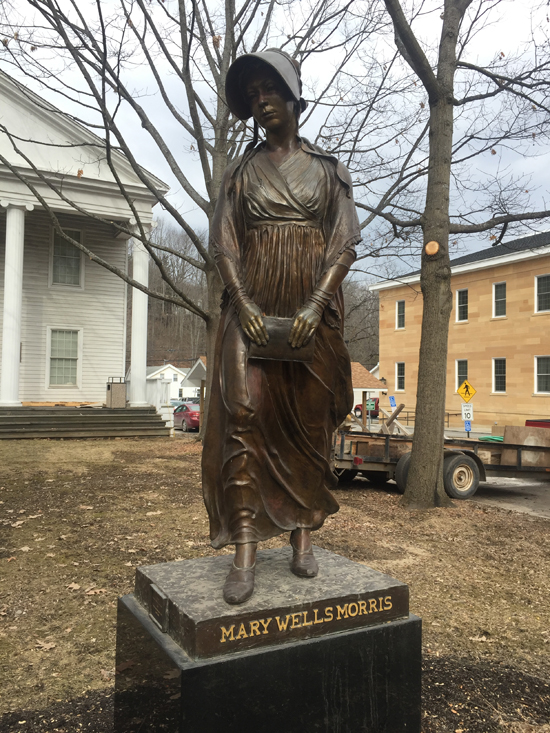 Unveiled on May 20, 2009, a life-sized bronze statue of Mary Wells Morris stands on 120 Main Street in Wellsboro. This plot of land was part of the original deed in 1806, and the Tioga County Historical Society has now established its Robinson House Museum there. People wanted a statue to commemorate the beginning of the town, but they did not know who to honor. A woman named Rita Bocher came up with the idea to make a sculpture of Mary Wells Morris. After taking care of all the legalities, Wellsboro historian Scott Gitchell conducted research to help with the statue. He located photographs of Mary’s mother that were used to guess what Mary’s face looked like because there were no known photographs of Mary. He researched clothing that she would have worn in the early 19th century, and he located a bonnet in the Swarthmore and Haverford College libraries which was used as a model for the one worn in the sculpture. A.R.T Design Group of Lancaster, Pennsylvania ultimately constructed the statue; they first constructed it from clay and then detailed with the bronze.

The statue is a commemoration of Mary Wells Morris, and it recognizes her as one of the founders of the town. It symbolizes the birth of Wellsboro, but because of limited inscription space, it cannot tell the story. The Robinson House Museum mentioned previously displays some information regarding the beginning of Wellsboro, and the Tioga County Historical Society has details from the early years as well. The story of Wellsboro’s birth is a fascinating one, and the sculpture of Mary Wells Morris serves as a reminder for those important people who helped create the town.

The Birth of the Town

Pennsylvania originally gained the land of present-day Wellsboro through the 1782 Decree of Trenton. The land was occupied mostly by the Seneca Indians, but after the Treaty of Fort Stanwix in 1784, white men gained the right to settle the land. However, they struggled to settle the land until 1787, when Samuel Baker, a man from New York built a cabin in Lawrenceville, along the Tioga River. Land speculators in Philadelphia, including a man by the name of James Stuart, owned roughly 65,000 acres of land in Lycoming County. Eventually, taxes became a serious issue for them, so they decided to sell the land.

Benjamin Wistar Morris—the son of a wealthy merchant from Philadelphia—married Mary Wells (born on September 16th, 1761), and the couple had two children, forming a small Quaker family. Mary’s brother, William Hill Wells, served as a U.S. senator and was one of the most prominent men in America in the early 19th century. William also commanded the Pine Creek Land Company, of which Benjamin W. Morris was an agent. Eventually, Benjamin and Mary bought all the land in Tioga County after an “Omnibus Bill” split Lycoming County into five smaller counties. The Pine Creek Land Company influenced the creation of the bill.

When the bill was signed on March 26, 1804, it officially created Tioga County. In response to the bill, Mary and Benjamin moved to Tioga County in 1805. Because it was brand new and hardly settled, there was only a single township. On December 2, 1806, however, The Pennsylvania General Assembly passed several acts. Among those acts, Section 29 created Delmar Township—a new independent election district—and designated Wellsboro as its county seat. At the time, the Morris family were the only people living there, so historians believe Benjamin Morris named the small town—whose layout resembled Philadelphia’s—in honor of his wife.

After Benjamin Morris bought the 150-acre town, people gradually began to move there. For the next 25 years, people lived in Wellsboro, but it was not officially incorporated as a borough until March 16, 1830. At that point, the town had roughly 250 residents. The population continued to grow, and eventually Wellsboro became part of the General Borough Act of 1851. On April 7, 1885, the borough was divided into two wards, and in 1890, Tioga County reached its peak population due to the booming lumber and coal industries.

Gnichtel, Frederick W. The Trenton Decree of 1782 and the Pennamite War. Trenton: 1782

Thompson, T.M. Acts of the General Assembly of the Commonwealth of Pennsylvania Passed at a Session, Which was Begun and Held at the Borough of Lancaster, on Tuesday the Second Day of December, in the Year of Our Lord, One Thousand Eight Hundred and Six, and of the Independence of the United States of America, the Thirty-First. Philadelphia: Printed by John Bioren, 1807.