The Durham Bulls Athletic Park, home to the Durham Bulls Baseball Team, opened in 1995 in Durham, North Carolina. It is located on the perimeter of the American Tobacco District in the downtown area. Prior to this, the Durham Bulls Baseball Team played in the East Durham Ballpark and then the Durham Athletic Park. The new park was built in response to demands from fans and players for an upgraded, larger park. The “new” ballpark is still rich with history, equipped with a view of revitalized tobacco trade buildings and warehouses on the third base side. The new park also boasts many new attractions such as the fan favorite “Snorting Bull,” extensive food and drink vendors, and expanded areas for seating and family recreation. 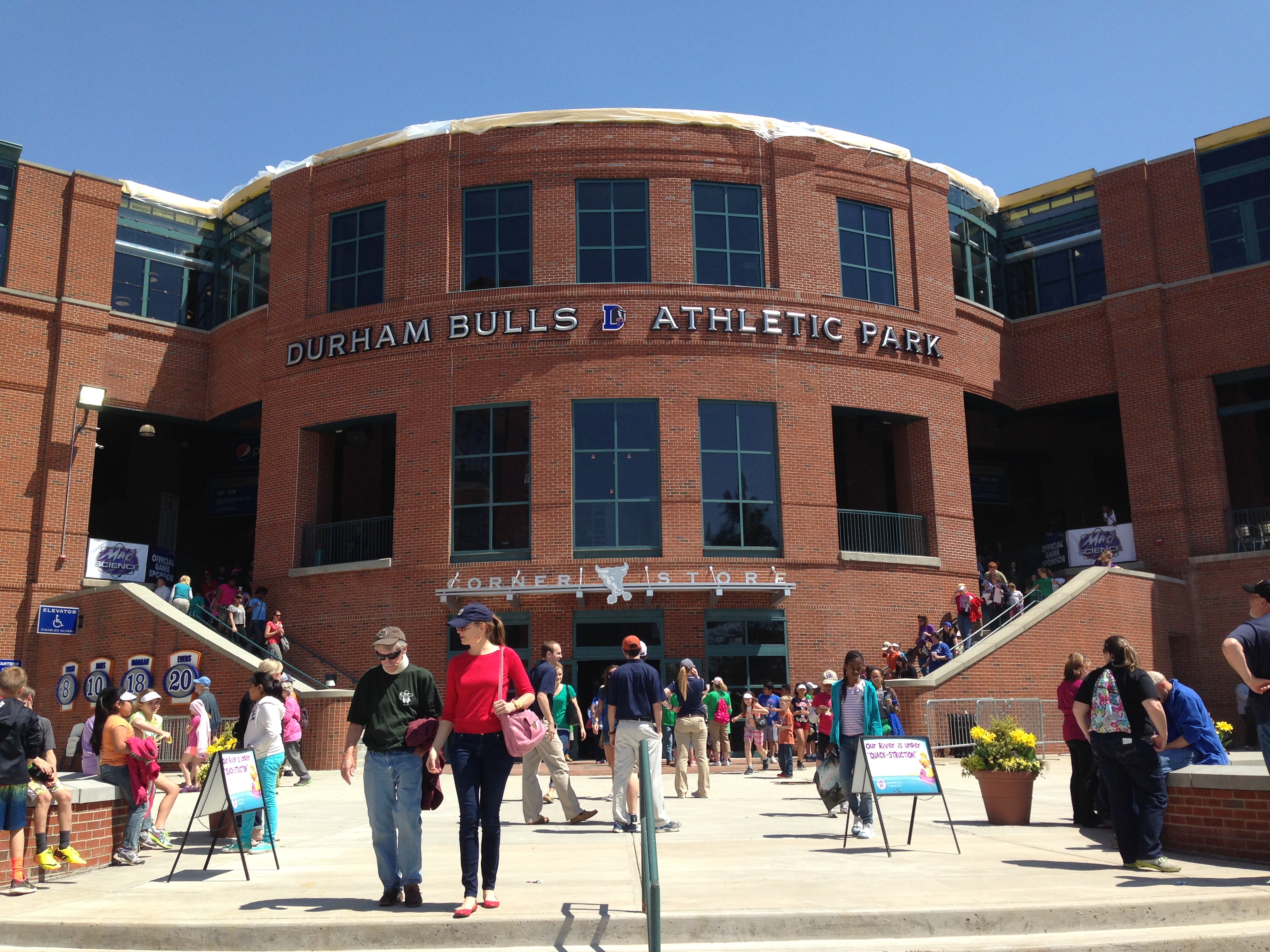 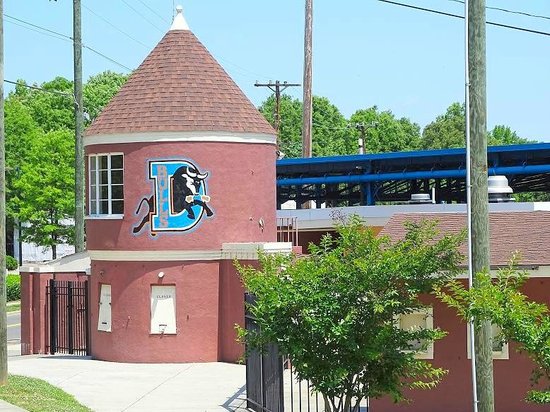 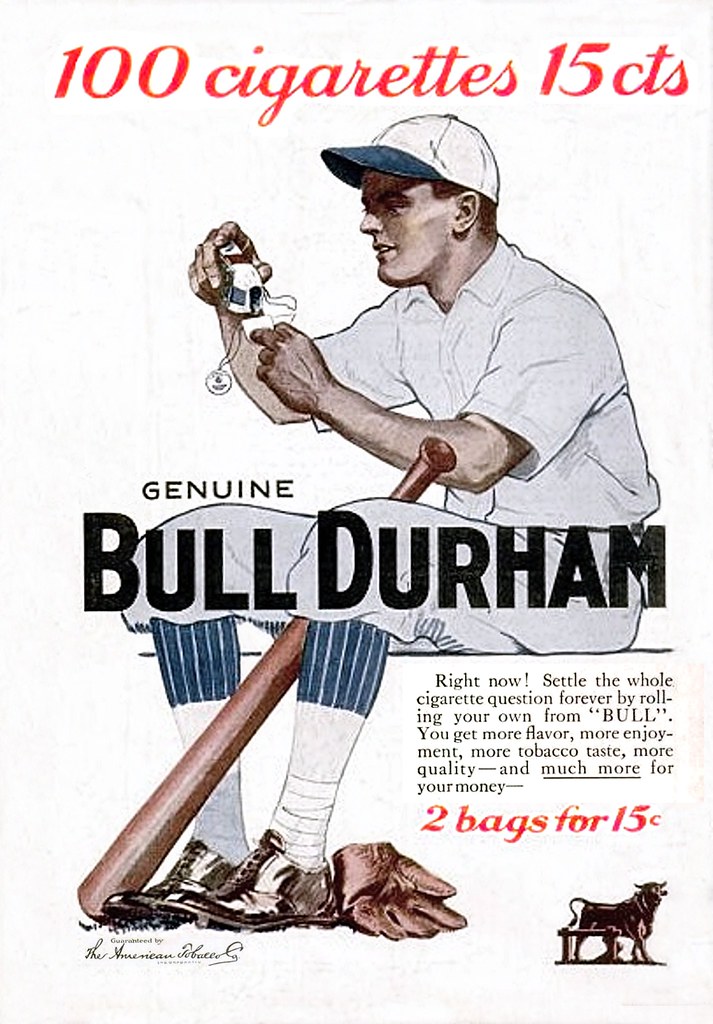 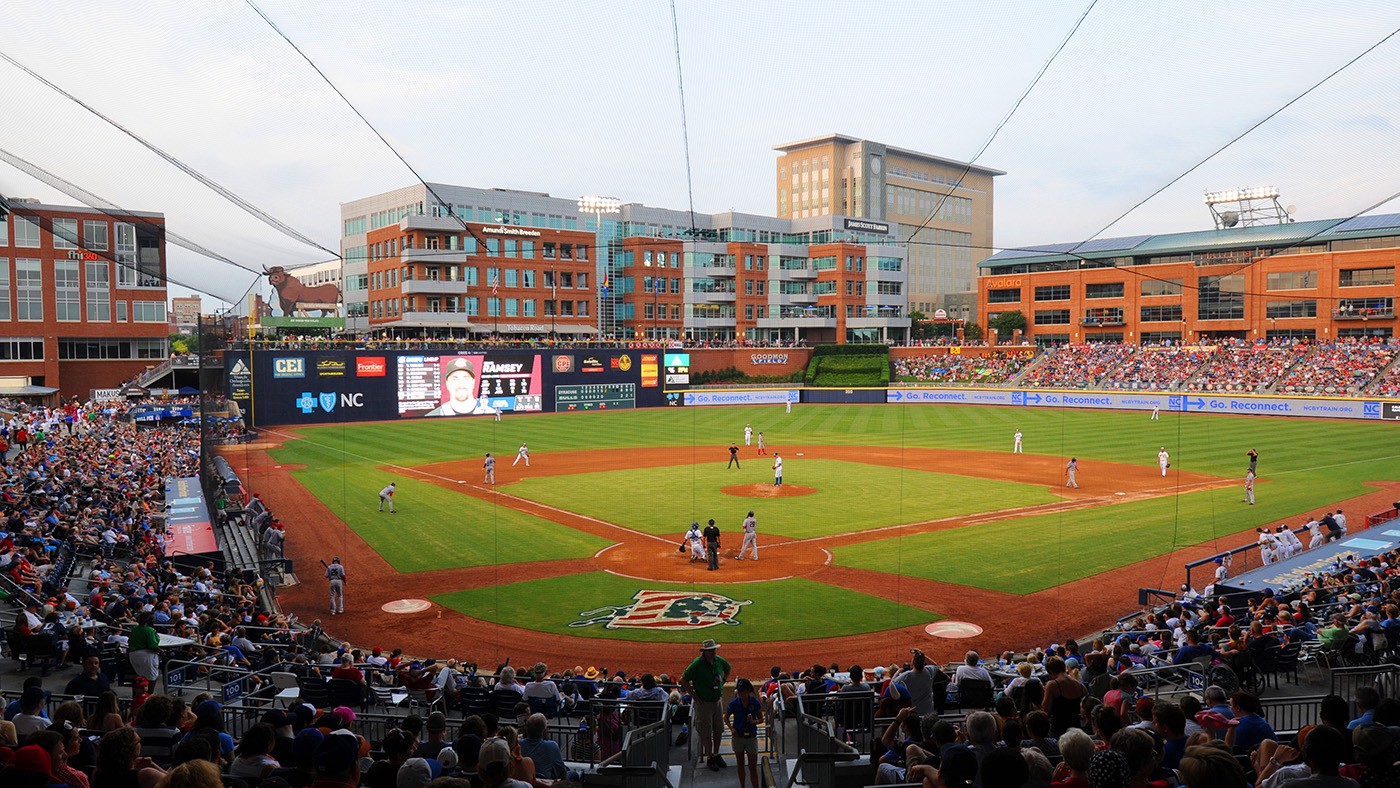 In 1995, the Durham Bulls Athletic Park (DBAP) moved from its original location to its new American Tobacco District location in downtown Durham. The Durham Bulls initially played ball at the East Durham Ballpark in 1913 as a class D farm team for the Cincinnati Reds. World War I provided a temporary cease in play for the Bulls. However, in 1918, the Bulls joined the Piedmont League and began to gain more popularity. Over $160,000 in private funds were raised to construct a new ballpark, coined the “El Toro Ballpark.” The Bulls played their first game in the new location on July 7, 1926. Shortly thereafter, the park was officially dedicated to the Durham Bulls with both North Carolina governor Angus McLean and William Branam, the president of the National Association of Professional Baseball Leagues present. The Bulls won the Piedmont League in 1930 and in 1932 they became a farm team for the Philadelphia Phillies.

In 1939, the wooden stands of the El Toro Ballpark burned down. The city quickly hired George Watts Carr to reconstruct and design a new stadium. Following completion of the new stadium, equipped with metal and steel infrastructure rather than wood, the stadium was dubbed the “Durham Athletic Park.” Shortly thereafter, the Bulls switched ownership and became associated with the Brookly Dodgers major league team in 1940. They again switched affiliations in 1945 and 1948 with the Red Sox and the Detroit Tigers, respectively.

In 1971, still called the Raleigh-Durham "Triangles," the Bulls dismantled and no baseball was played in Durham until 1981. The Durham Bulls emerged once again, with the film Bull Durham helping the team gain more popularity than ever in 1988. However, the Durham Athletic Park, featured in the film, was deteriorating and many fans, players, and coaches called for an upgraded facility. Despite some location related investor conflicts, the city opted to proceed with building a new, upgraded facility located in the American Tobacco District.

In 1995, the new Durham Bulls Athletic Park was built and established as the new home stadium for the Bulls. The new park was built to Triple A baseball park standards. The Durham Bulls eventually became an international level farm team for the Tampa Bay Rays. In 2013, the park underwent another upgrade complete with a seat expansion, an upgraded sound system, a childrens’ playground, and an expanded open air area to eat, drink, and socialize. The new ballpark is still rich with history, equipped with a view of revitalized tobacco trade buildings and warehouses on the third base side. Another attraction the new park boasts is the “Snorting Bull.” The Snorting Bull is located on what is known as the “Blue Monster” wall in left field. If a batter clears this wall or any other outfield fence, the bull celebrates the home run by blowing smoke out of its nostrils, lighting up, and wagging its tail -- a fan favorite. Another tradition associated with the bull is “hit the bull, win a steak.” The tradition is that if a home team player hits the actual bull, they win a steak from the Angus Barn Restaurant.