Gibson Mill is a textile mill that was built roughly between 1889-1890 and opened in 1901. The mill was a part of the Cannon Manufacturing Company started by J. W. Cannon which employed many of the older generation inhabitants of Cabarrus County during the mid 1900s. Located across the Southern Railway and adjacent Gibson Mill is the village that housed many of the employees. The cotton mill closed in 2003 due to foreclosure but was bought by a group of friends a year later. After the space obtained new ownership in 2004, the building reopened its doors to the public as an antique mall, an events center, a local brewery, and even has plans to open a food hall in early 2020. 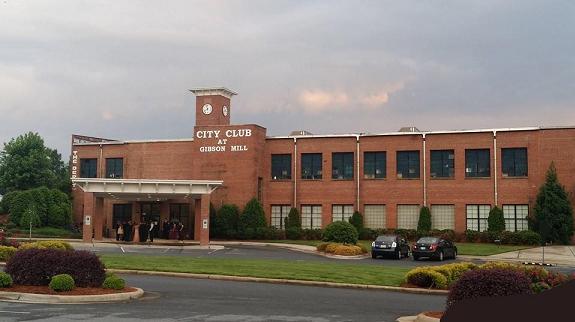 Postcard of Gibson Mills circa 1920 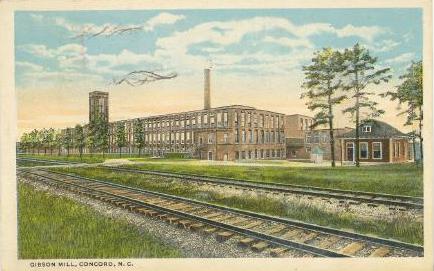 1890 Photograph of Gibson Mill and the Mill Houses

2019 Photograph of Gibson Mill and the Mill Houses 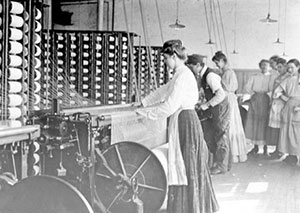 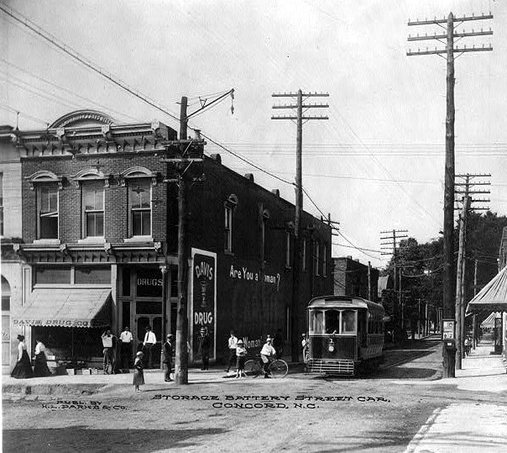 The history of the Gibson Mill begins with the story of Cannon Mills in Kannapolis, North Carolina. Cannon Mills was founded by James William Cannon in 1887 and began as a textile manufacturing company for cotton cloth. J. W. Cannon was born in 1852 and died in 1921. Cannon Mills became popular among southern housewives because of their fabric Cannon Cloth, used for sewing together shirts and pillowcases at home. The company produced its first towels in 1890 and during World War I, it had become the nation’s largest towel producer.

The company expanded, opening five other mill locations, including Gibson Manufacturing Company in Concord. Gibson Manufacturing Co. was established in 1899 and opened in 1901 after J. W. Cannon partnered with R. E Gibson. The opening came during a pivotal time for Concord, NC, because of the previous decade of construction for a streetcar line. The streetcar line called the "dummy line" ran up Corbin Avenue allowing it to reach Union Street which housed all the local businesses. The streetcar tracks originally only reached the physical town of Concord on Union St. and not Gibson Mill, located on McGill Avenue. A few years later, the line extended further North to include present-day Gibson Mill.

Cannon Manufacturing Co. helped keep many locals in Cabarrus County employed during the Great Depression, as well as offered housing for rent to its employees at the Gibson Village. Gibson Mill was a part of Cannon Mills known as Plant # 6. In 1958, Kay Barbee, who was a factory worker and single mother, applied for the housing located across the railroad from Gibson Mill. Mrs. Barbee stated in an interview conducted on November 7, 2019 that she paid thirty dollars a month for her family to live in the village. When Gibson Mill halted its production and laid off its employees in 1986, she bought the home she rented for $17,000.

Cannon Mills shut down in 2003 after filing for bankruptcy, which left 4,800 NC employees without jobs. The textile company had gone through many different hands and changed its name to Fieldcrest Cannon. The remnants of Cannon Manufacturing Company remain in the Cannon brand owned by Iconix Brand Group based in New York. Once the manufacturing company shut down, the new owners of the Gibson Mill made some alterations to its exterior, but the main tower shown in postcards and photographs remains intact today.

After Fieldcrest Cannon came to a close in 2003, the Gibson Mill was shut down and had no plans of further use until a group of friends purchased the old mill. The building reopened to be used as space for retail and offices in 2004. In the last fifteen years, the newly refurbished space houses The Depot, which has become the largest antique mall in the Southeastern United States, The City Club Events Center, High Branch Brewing Company, and a food hall which has been announced to open in early 2020. There are many new plans for the remainder of the space at Gibson Mill and what’s significant is that a historical building that brought so many Cabarrus Country locals together is going to be a part of the future of Concord, NC.