Fort Defiance was built by American soldiers under the leadership of General “Mad” Anthony Wayne in August 1794. The fort served as a base of operations for Wayne's forces who launched search and destroy operations against Native American villages in this region leading up to the Battle of Fallen Timbers. This scorched earth campaign destroyed Native crops which made it impossible for Native tribes to continue the war, especially following Wayne's victory in the Battle of Fallen Timbers on August 20, 1794. The fort was again used as a base of operations against Native American tribes and soldiers in the War of 1812 and Tecumseh's War. The site of the fort is now a public park with interpretive signs.

Replica of cannon at the location of the former fort which is now a city park.

This image depicts what Fort Defiance might have looked at the time of the War of 1812. 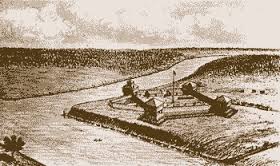 The fort that was built at this location in 1794 provided General Wayne with a base to attack Native during the Battle of Fallen Timbers. General Wayne came out of retirement with permission from George Washington to lead this campaign against the Indians. The Fort consisted of a square with 60 foot long walls with a 22-foot square blockhouse on each corner. Each blockhouse each contained a howitzer. Later, Wayne ordered upgrades for the fort. A wall of dirt, eight feet thick and a ditch eight feet deep and fifteen feet wide protected the outer perimeter, and ordered the fort to be upgraded with drawbridges providing access from the confluence point to the land side of the fort.

There is controversy on who said that the fort could protect them from "the English, the Indians, and all the devils in hell." One source says it was General Wayne, another says that it was a lieutenant in Wayne's army. The fort provided a strongly fortified position which led to victory for Wayne, and later, the Treaty of Greenville. The treaty resulted in Native tribes ceding land in return for a promise to respect remaining Native American territory.

The fort became a site of trade following the Battle of Fallen Timbers and was once again utilized as a base of western operations during the War of 1812 and Tecumseh’s War. Future President William Harrison and his men garrisoned the fort which served as a vital link in the American army's supply chain. The area was inhabited by settlers in the following years but was finally abandoned in 1815. The City of Defiance was named in honor of the former fort.