Though a bridge was constructed in the same location in 1881, the citizens of Alderson rallied for a new, more secure bridge to be built. In 1914, the Concrete Steel Bridge Company, under the guidance of architect Frank Duff McEnteer, built the current standing bridge, which is the longest earth filled concrete bridge in the state of West Virginia. However, the bridge was deemed unsafe and repaired for exclusive pedestrian use in 1977. The following year, Alderson received the National Trust for Historic Preservation President's Award, which is notable for being the first time West Virginia received an award for its preservation efforts. The bridge was added to the National Register of Historic Places on Dec. 4, 1991 for its architectural significance and for being an important part of Alderson's development. 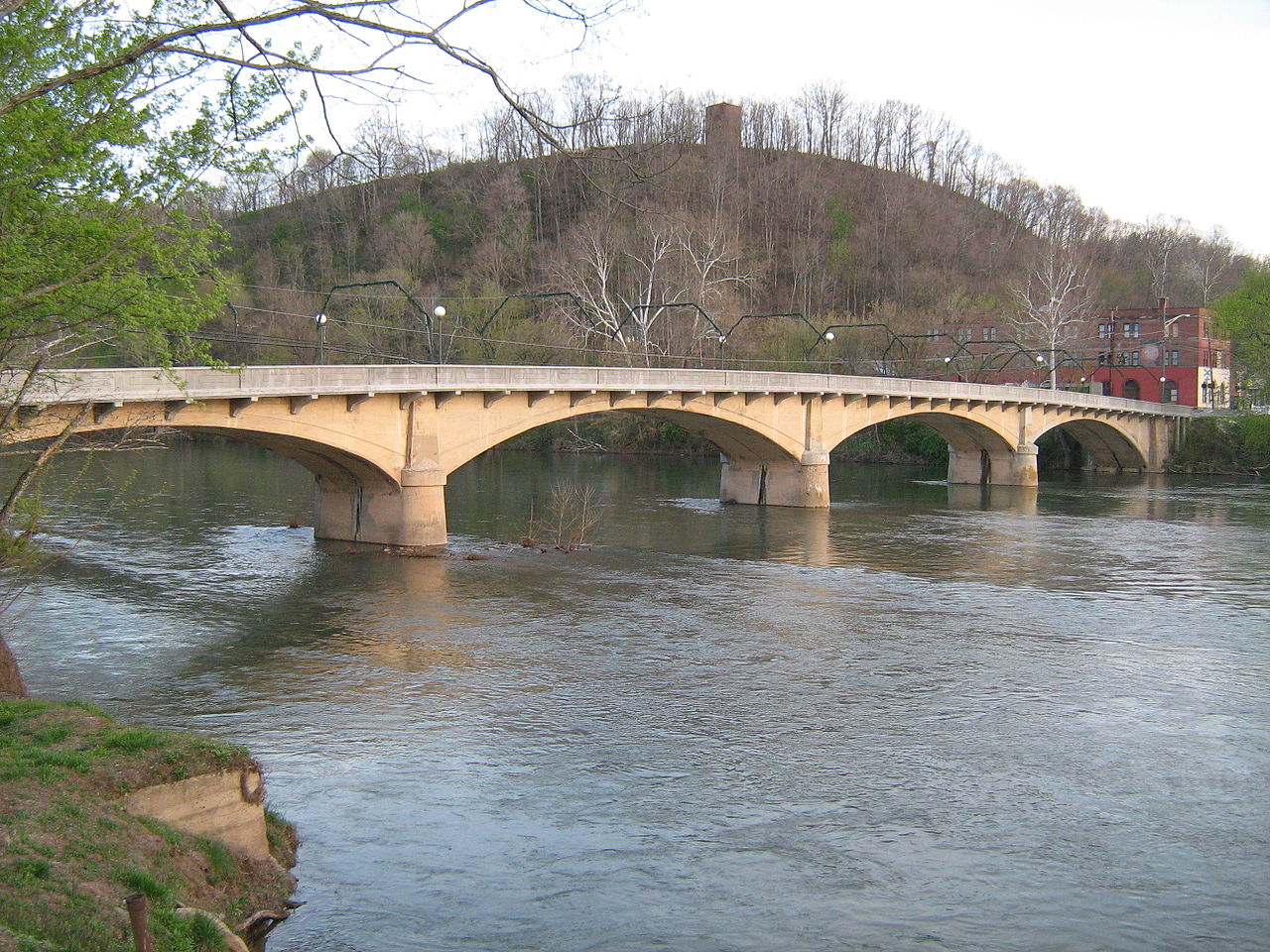 The bridge lit up at Christmas time 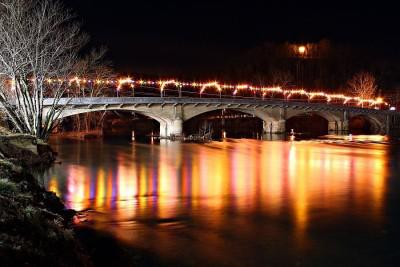 The old (1881) iron bridge was used by the contractors as a platform to pour the arches of the new bridge.

In 1872, when the railroad industry came to Alderson, the town quickly began to grow beyond its humble beginnings. A ferry system was originally used to cross the river, as the closest bridge was 100 yards upstream from the current site. In 1881, a metal bridge was constructed by the Pittsburgh Construction Company to replace the aging ferry system, which helped to modernize the town. However, local citizens were unhappy with the bridge, and it was deemed unsafe by 1913. The Concrete Steel Bridge Company, led by architect Frank Duff McEnteer, won a bid to construct a new steel bridge to replace the dilapidated bridge, and construction on the 21-foot-wide, 453-foot-long bridge with accompanying pedestrian walkways was completed by November 1914. When the bridge was completed, it was the longest earth filled concrete bridge in the state and the third longest concrete arch bridge in the state. Today, it is the only concrete arch bridge that still stands in the state.

One of the most significant purposes of this bridge is that it linked the south and north sections of town and provided a pedestrian walkway and easy trade route so that citizens had easy access to both sides. The railroad station and commercial section were contained in the south section of the town, and the residential section, churches, and hotel were located in the north section.

Over time, this bridge, too, became dilapidated, and the West Virginia Division of Highways constructed a new bridge downstream in 1977. The Alderson Bridge was marked for destruction, but the Alderson Bicentennial Commission and the Alderson Woman's Club worked together to designate the bridge for exclusive pedestrian use. Repairs were made, and the bridge was saved and renamed the Alderson Memorial Bridge, a decision supported by the town at large. The following year, Alderson received the National Trust for Historic Preservation President's Award for the efforts to save the bridge, which is the first time West Virginia received such an award for its preservation efforts.

In the early 2000s, due to being exposed to the elements and age, the bridge was in need of significant structural repairs. The walls were replaced with nearly identical looking walls with the added benefit of being tied to the structure of the bridge. The bracket was also replaced, keeping in the same aesthetic design, to help preserve and maintain use of the pedestrian bridge. The bridge still stands today, thanks in no small part to efforts to maintain the integrity of the bridge by groups such as the Alderson Bridge Trust Fund, which was established in 1976.

The Alderson Memorial Pedestrian Bridge was added to the National Register of Historic Places on Dec. 4, 1991, for its architectural significance, namely for being a well-preserved example of a concrete arch bridge, and for the impact it had in Alderson's development following the arrival of the railroad industry. Additionally, the bridge is decorated annually for Christmas and the Fourth of July, and parades cross during special events and festivals.