The Vietnam War Memorial is a memorial installed within the Veterans Memorial Park located in the Back Bay Fens. It was placed alongside the South Korean War Memorial in the Back Bay Fens in 1989, where a World War II Memorial was already present. This Vietnam War Memorial is composed of a stone structure with three vertical columns. These columns display the names of citizens from Massachusetts who lost their lives during the Vietnam War. The top of this memorial features the distinction VIETNAM, 1962-1975, signifying the dates of the war’s ramping up and officially ending. There is a platform surrounding the memorial which displays a map of Vietnam.

The memorial seen through an angular view within the natural greenery of the Fens. 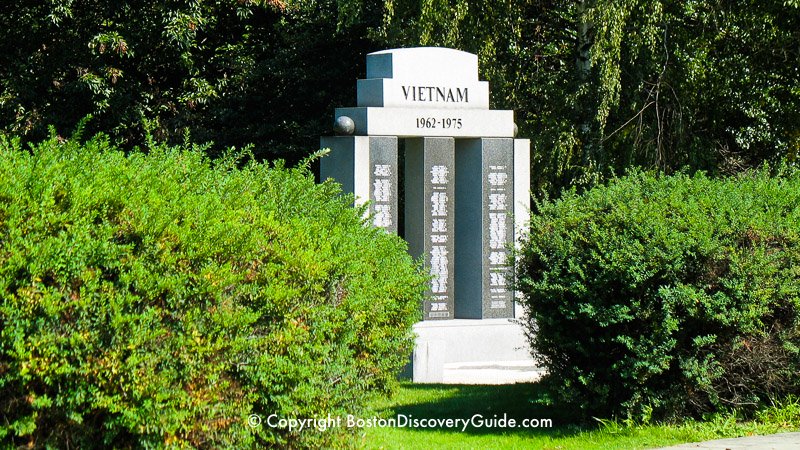 Designed in 1987 by Rojas Vogt, The Vietnam War Memorial was constructed and installed as a memorial in the Back Bay Fens in 1989. The initial designs and plans to construct this memorial faced mild controversy in which Fenway residents disputed this additional construction citing reasons such as disrupting the natural greenery of the Fens, and claiming the installation as redundant, pointing to the presence of the South Boston Vietnam Memorial as an example (Hanafin). However, these efforts were overcome as the simultaneous construction of both the Korean War Memorial and Vietnam War Memorial in the Back Bay Fens overcame the concern of construction. In terms of redundancy, the design of the memorial entailed honoring Boston residents fighting in the Vietnam War, much more comprehensive than the South Boston Vietnam Memorial, which honors 25 fallen soldiers who had enlisted together.

Once fully completed, along with the nearby World War II memorial and Korean War memorial, these monuments collectively make up what is known as the Veterans Memorial Park. The stone features three slabs as columns as its primary features. The MA Office of Travel and Tourism states the purpose of the memorial is to detail and immortalize the names of Massachusetts residents who lost their life due to this conflict. The top of the stone is labelled VIETNAM, August 5th 1964 - May 7th 1975, specifying the dates of the explicit "wartime" conflict getting exacerbated and then officially being finished, respectively. Underneath this plaza, there is a stone platform which features a map of Vietnam constructed into the ground. While this memorial is primarily focused upon honoring Boston residents sacrificing their lives in Vietnam, the memorial also bears the names of local men and women whose lives were lost during the conflict in Cambodia and Laos (Boston Discovery Guide).

This monument is dedicated to the 187 veterans who were Boston residents at the time of their enlistment and service. The criteria employed has faced some scrutiny, with a number of residents believing their friends and family should be memorialized as well. This led to historian Paul Partridge stating thirteen additional names should be placed alongside the others. Much of this is due to the strict residency guidelines, in which a Vietnam veteran who is considered for honor here must have proven residence in Boston at the time of enlistment and service (Arnold). This has created a relatively fluid memorialization process, something generally uncommon with memorials.

One significant instance of this is that the circumstances surrounding veteran Thomas Casey's inclusion on the memorial. Casey grew up in Hyde Park and his family moved to Milton prior to his enlistment in the Marines, though he had already enlisted in the Navy in Boston. A Vietnam veteran himself, Sean Conley noticed the memorial was not in correct alphabetical order and thus began researching the reason for this anomaly and found this residency inconsistency as a reason to remove Casey's name (Arnold). The strict residency requirements rendered this situation unclear and as a result his name was removed. This decision was met with criticism from local veterans groups and Boston Globe writer David Arnold notes "The purging of Casey's name gives the Boston Vietnam Memorial the dubious distinction of being the only American war memorial to have had one of its names obliterated..." A fluid nature for a memorial such as this is a sensitive matter, particularly as actions such as these are in conflict over being historically accurate to the purpose of the memorial and potentially dishonoring these Boston veterans. The implementation of a criteria such as this and abandoning the static condition employed by most other memorials are two noteworthy distinctions making the Vietnam Memorial in the Back Bay Fens unique.