The Battle of Pigeon's Roost marker is a reminder to Princeton residents of a Civil War battle fought on their soil. This small skirmish occurred on May 17, 1862 when Confederate Major Peter Otey attacked a Union regiment led by Colonel Louis von Blessing. The fight ended with a Confederate victory; 18 Union soldiers and one Confederate soldier were killed. 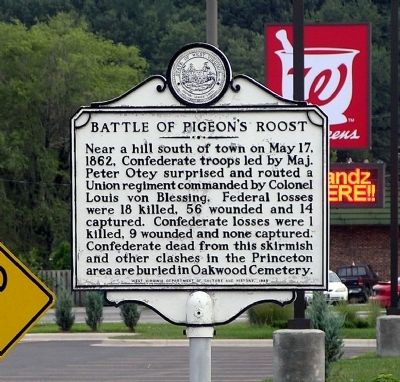 The Union Troops led by General Jacob Cox were first attacked near Camp Creek. The Confederates that attacked retreated South and burned Princeton on their way through. The Union troops, wanting to destroy the railroad at Dublin, Virginia, continued forward to Princeton and then to Pearisburg. However, Cox's army had to retreat to Princeton because they encountered an unexpected small group of Confederates. They fought until morning and even more Union troops approached, but due to their unplanned guests the Confederate soldiers the Union ended up losing troops which ended their quest to destroy Dublin's railroad.

The marker is located on South Walker Street in Princeton. It reads "Near a hill south of town on May 17, 1862, Confederate troops led by Maj. Peter Otey surprised and routed a Union regiment commanded by Colonel Louis von Blessing. Federal losses were 18 killed, 56 wounded and 14 captured. Confederate losses were 1 killed, 9 wounded and none captured. Confederate dead from this skirmish and other clashes in the Princeton area are buried in Oakwood Cemetery."

It may be noticed that the leaders written on the markers and the leaders on the historical marker are different. This is because this war was a skirmish, which means it was very small and fought by very few soldiers. The names on the plaque are the men who fought in the war and the names from the articles are the leaders over the entire Confederate and Union armies at the time.