An original Carnegie Library the Mansfield/Richland County Public Library was dedicated on December 19, 1908. The original building was designed by Mansfield native Vernon Redding, Redding also designed the Galion, Ohio Library and various buildings in Ashland county. Changes were made in 1950, the most notable where the removal of the front steps allowing patrons to enter on the first floor, and an addition added to the back of the building to extend floor space. Additions were again made in 1989, adding east and west wings tripling the size of the library. 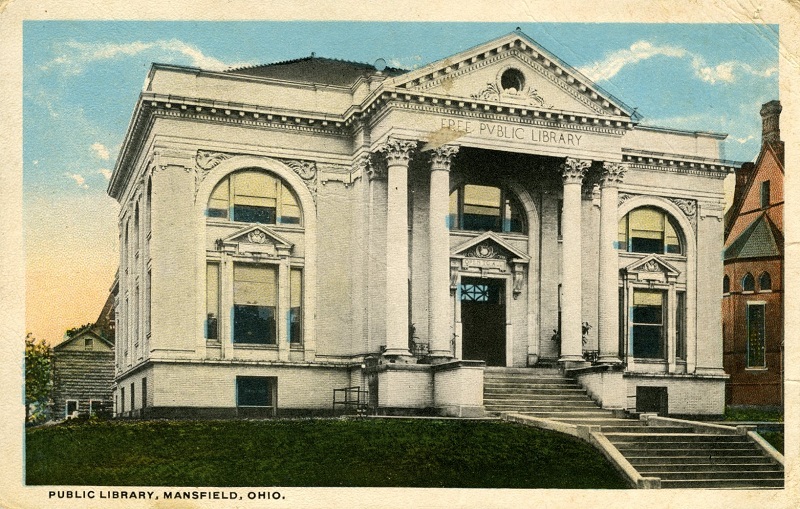 Around 1890 Miss Martha Mercer became the head librarian of the Memorial Library, which was then housed in the Soldiers and Sailors Memorial Building. Miss Mercer traveled to New York and met with James Bertram, Andrew Carnegie’s secretary. In 1903 Carnegie awarded a grant for $35,000 for the construction of a new library. There were conditions attached to this grant, the city had to supply a site for the new library and provide $2,500 per year for maintenance. At that time the Memorial library had an annual cost of about $2,300 and the library association had $5,000 available from the estate of John C. Larwill to help secure a site. The future looked promising. It took almost two years for a location to be secured and in January of 1905 the site of the Grace Episcopal Church on West Third Street was chosen. A few months later the library board selected Vernon Redding, of Mansfield, as architect for the new building, who also designed the Galion Public Library. The new Mansfield Public Library was dedicated on December 19, 1908 and open for business.

In 1914 Miss Mercer retired and Miss Helen Fox succeeded her as head librarian. During World War I the American Red Cross was housed in the assembly room of the library and in October and November of 1918 the library had to close due to Spanish Influenza.  It was during this time, in 1924, that the library changed from a municipal library to a school district library, which allowed the library to increase its support by bringing it under the tax support of the schools. In 1927, Helen Keating, the first children’s librarian was hired. Miss Helen Fox passed away January 2, 1931.

The library began outgrowing its space and in 1950 construction started to ease this burden. The most notable changes where the removal of the front steps allowing patrons to enter on the first floor, and an addition added to the back of the building to extend floor space. In August of 1965, the roof caved-in over the circulation area and it took nearly a year for repairs to be completed. In May of 1987 library materials were moved to the Tucker Building on Park Ave. West and construction began on the expansion. In 1989 construction was completed on the Main library, with an opening ceremony on February 12, 1989.

This tour features Mansfield buildings which have managed to stand the test of time. Start at the Mansfield/Richland County Public Library, a landmark on West Third Street since 1908 and follow the path to the Booth-Craig House, Old Federal Building, Mansfield Savings Bank, what remains of the grand Wiler, and end your tour at The Mansfield Memorial Museum.