The Institution of Bacon Academy has been a staple of Colchester, Connecticut for over 200 years. In 1800, the school was built along Main Street, a central location of the town then and today. The building, which remains next to Colchester’s Town Green, was built in 1801 from money willed by wealthy Colchester resident Pierpont Bacon. The funds he willed were large even by the monetary standards of the late 1700s/early 1800s. What set Bacon Academy apart from other public high schools at the time, however, was that it provided education for African Americans, albeit in a separate building, but part of the same institution nonetheless. The Laws of Bacon Academy adopted in 1803 say this: “Negroes and persons of color shall be provided for in a separate building to be provided by the committee.” This unique place of education drew attention from all over New England, and operated for thirty years before integrating into Bacon Academy’s main student body. 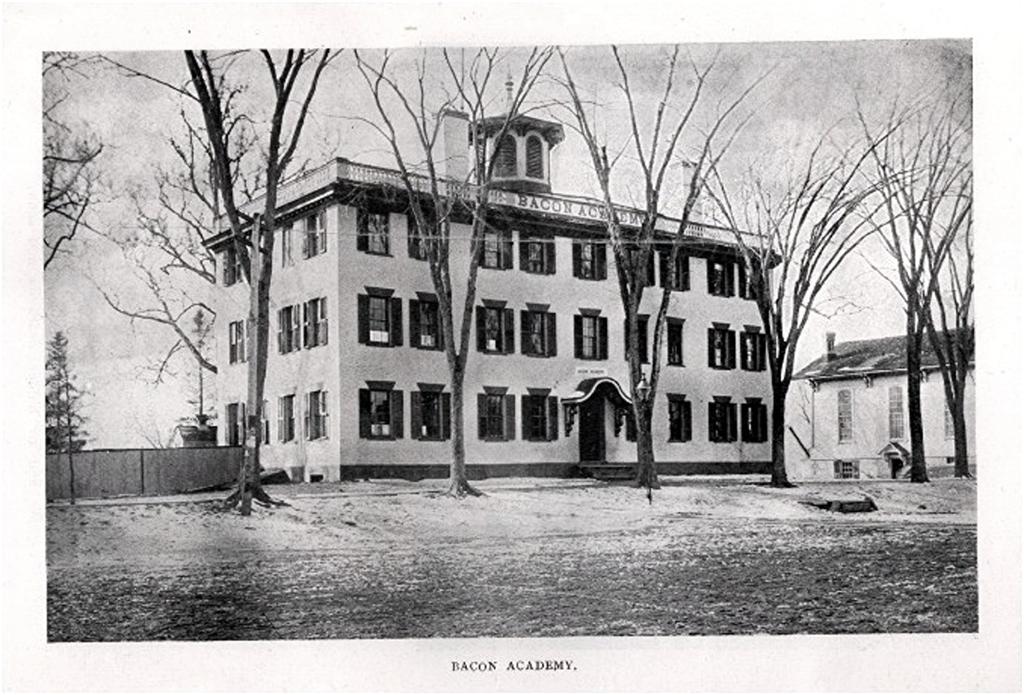 Old Bacon Academy in the present 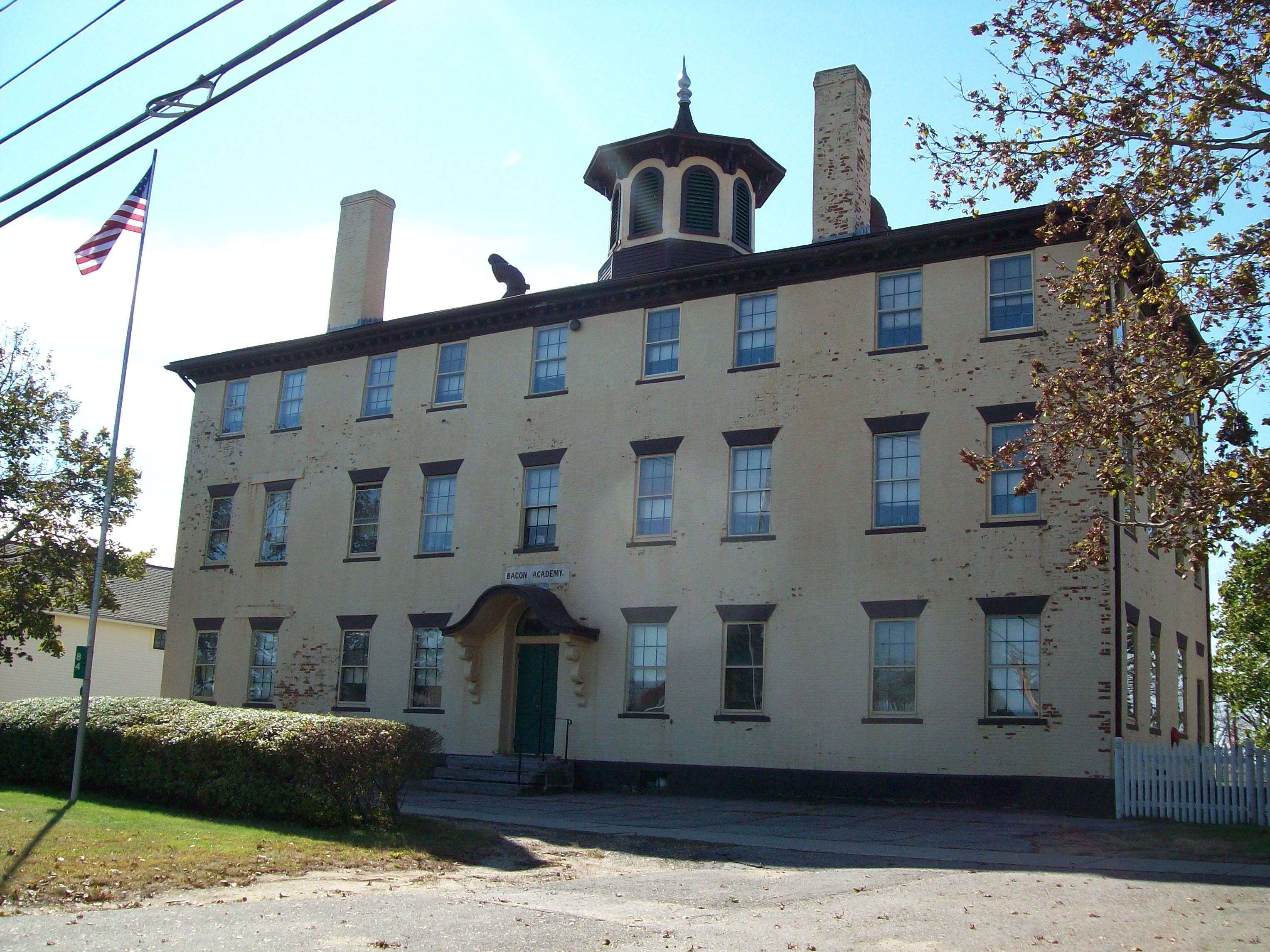 Bacon Academy Principal Matthew Peel during the Founder’s Day Celebration at the gravesite of Pierpont Bacon at the rear of the Old Bacon Academy building in 2018. 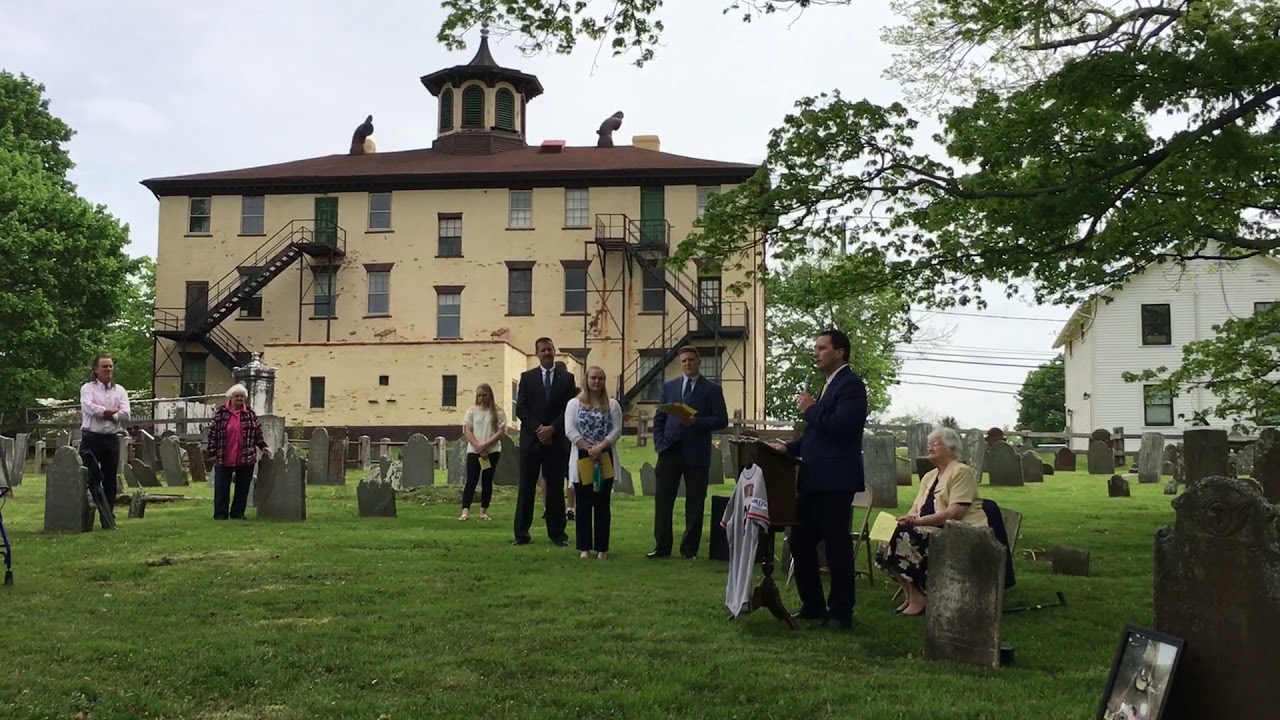 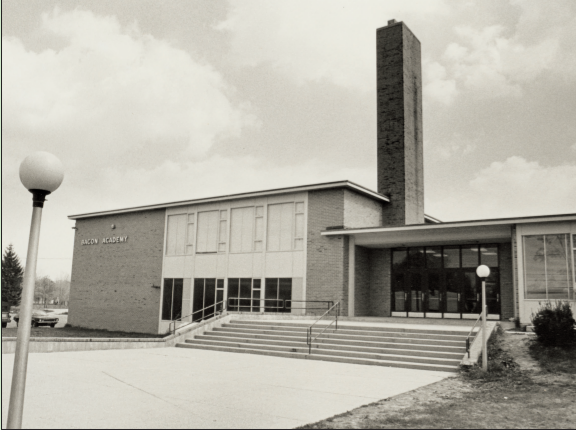 Pierpont Bacon was a wealthy and prestigious farmer living in Colchester throughout much of the 18th century. He believed in the importance of education, specifically the idea that institutions should be in place to prepare young men for college education. He was born in 1724, and came to Colchester with almost nothing in terms of money at the age of 21 in 1745. Bacon initially worked in town as a carpenter, specializing in 'house joining', the practice of finishing the interiors of houses after the rooms were built. He worked this until 1751, when he married Abigail Newton, a Colchester native. The two bought land, and opened a farm together. Over time, Bacon accumulated more than 800 acres of land, and owned several slaves.

However, Bacon did not garner a good reputation during his life. To the other residents of Colchester, he was perceived as someone who was very introverted and shy. He would hoard his earnings, and made efforts to keep his relatives out of his will. Bacon was convinced, though, to donate his wealth to the town. His friend and physician, Dr. John Watrous, along with his wife, Lydia, and son John, also a physician, convinced him that willing his money to the town to have a school built would not only perpetuate his name, but also ensure that none of it went to his relatives that he so loathed. When Bacon died in 1800, he had willed $35,000, which is $666,686 in 2019. His relatives attempted to challenge Bacon's efforts to deny them any money in his will, but failed. The building itself cost $7,000 to build, and was placed next to the town's Church on Main Street, alongside the Town Green.

Bacon's will said this about the school from which his willed money would build: “A school for the instruction of Youth in Reading and writing, English, Arithmetic, Mathematicks and the Languages or such other branches of learning”

When the school was first opened, it did not operate as a modern day high school. Instead, it was a private Sunday school, but part of it was given to the district elementary school, with local students being admitted for free, similar to how state colleges once operated. Next to the three-story yellow building was the old wooden district school house. With the students from that building now being taught in Bacon Academy, it was turned into The School for Colored Children, the first school in the state of Connecticut for the children of local slaves. The reason behind the creation of this unique establishment of education was that Colchester had the highest black population in the entire state. In 1774, Connecticut had a black population of 3,285, 200 of which resided in Colchester alone. When it was first created, it had 40 students, but this number dwindled until the School was fully integrated into Bacon Academy 30 years after its inception. However, black students were being taught at Bacon Academy even before this. In 1813, Prince Saunders, a 21 year old Lebanon-born educator, became a teacher at the School for Colored Children while also taking courses on the classics at Bacon proper. Saunders went on to found numerous schools for African-Americans throughout Massachusetts, and Haiti. Bacon has been acknowledged as an important part of the history of black Americans, as shown in a piece written by Charley Cherokee in the Chicago Defender in 1941, where in a section titled 'Education's the Thing', he draws attention to numerous educational institutions that provided teaching to African-Americans.

Even in its early years, Bacon Academy had numerous prestigious attendees and graduates. Stephen F. Austin was Bacon’s first white graduate, who went on to found the Republic of Texas with Sam Houston. Lyman Trumbull was also a graduate of Bacon. Trumbull, after graduating from Bacon, went on to not only become a teacher in his own right, but became a member of the United States Senate, where he co-wrote the Thirteenth Amendment. Morrison Waite, Chief Justice of the United States Supreme Court in 1874, was a Bacon graduate, and classmate of Trumbull's. Bacon also had a knack for producing American governors: William Buckingham and Morgan Bulkeley, both Governors of Connecticut; Edwin Morgan, governor of New York; and William Larrabee, governor of Iowa.

In the 1850s, after much difficulty maintaining itself as a privately run institution, Bacon Academy's board had the town of Colchester take over financial responsibility for the school's elementary level students, one of the three 'divisions' in the school at the time. This decision is what eventually turned Bacon into the town's public high school. The elementary level students remained until 1931, at which time Bacon was primarily the town's high school. Following Colchester's population boom of the 1950s, the student body at Bacon grew at an exponential rate, to the point where, in the 1960s, the original building could no longer support it. Because of this, a new building was built in town, and by 1963, Bacon Academy was located in the present-day William J. Johnston Middle School. In the 1990s, the institution was moved to a newly constructed building again, and is where Bacon Academy has remained into the present. Despite the school's numerous location changes, it remains Connecticut's second continuously operating public high school, next to Hartford Public High School.

The Principal of Bacon Academy, Matthew Peel, gives a speech at the 2018 Founder’s Day gathering behind the original Bacon Academy building, near the grave of its founder, Pierpont Bacon. He describes how much the level of education and community trust has risen in recent years, as well as the kinds of college opportunities students have while at Bacon, hearkening back to the days in the mid-1800s when people would flock from all over New England to enroll in the prestigious Bacon Academy.

This is a pamphlet produced by the Town of Colchester in 1973, as part of an informative campaign to share the town’s history during the celebration of its 275th anniversary of being founded in 1698. The pamphlet gives a summary of the town’s founding, such as its founding figures and how they acquired the land that let them create the initial settlement that became Colchester. It also makes a point in describing the importance of Bacon Academy by listing all the major figures that graduated from it over its long history. The pamphlet can be located in the Local History section of Cragin Memorial Library in Colchester.

A compilation of all the histories of the towns of New London County, Connecticut, Hamilton D. Hurd provides a very informative section about Colchester, from the founding of the town, to the creation of Bacon Academy.

The Colchester Historical Society Website provides a well-informed history regarding Bacon’s founding, as well as telling the story about how it started with a separate institution for formally teaching slaves and African-Americans, the first of its kind.