The village of New Santa Fe started out as a campsite on the Santa Fe, Oregon, and California Trails. The campsite grew to a supply station, and in 1851, the small village was incorporated as a town. New Santa De was short-lived but it served as an important “last stop” before pioneers left Missouri and entered territories during their arduous journey along the Western Overland Trails. The town’s population declined with the Border Wars, the Civil War, and the trading village was no longer needed following the construction of the Transcontinental Railroad. Today, all that remains is the New Santa Fe Cemetery and wheel ruts from the countless wagons that passed this way.

Historical Marker at the cemetery 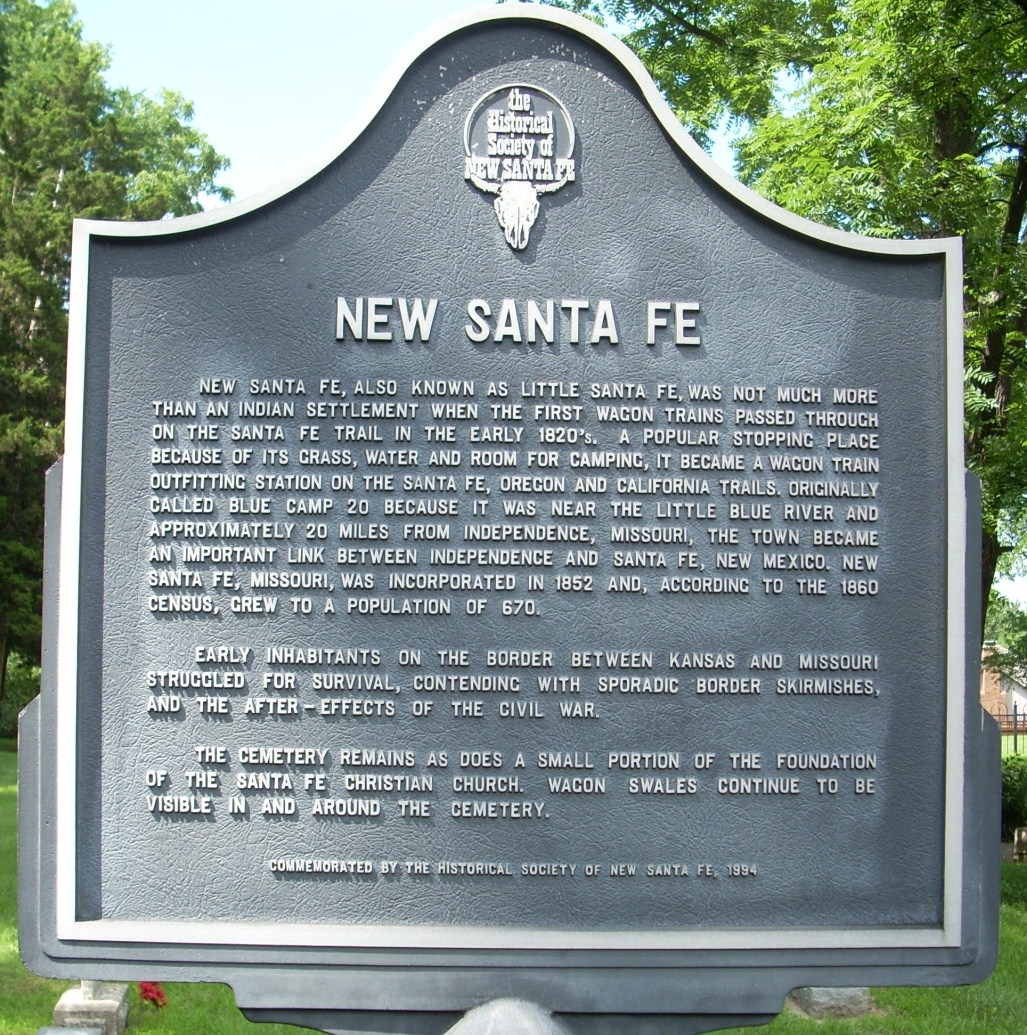 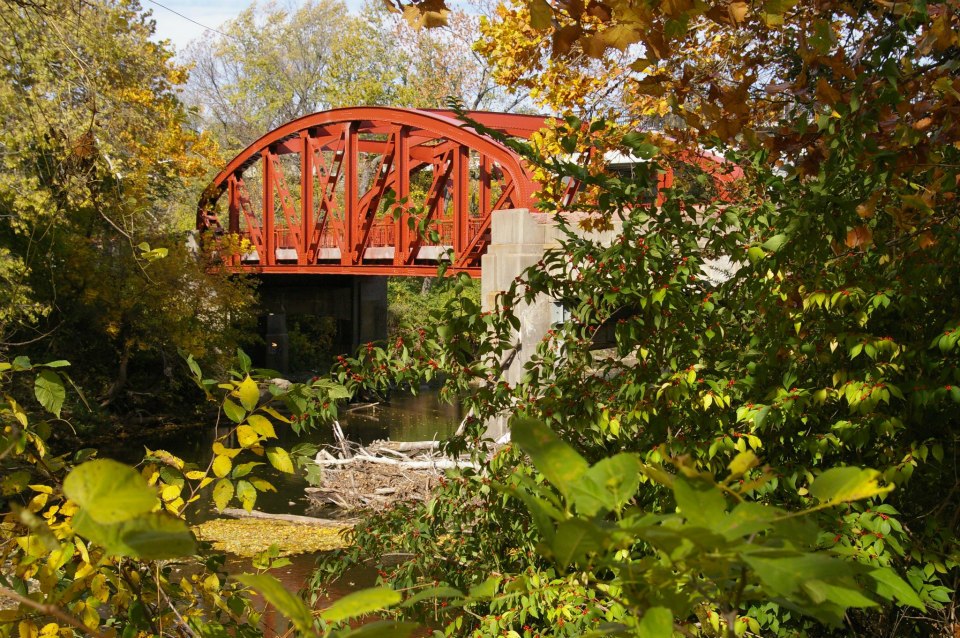 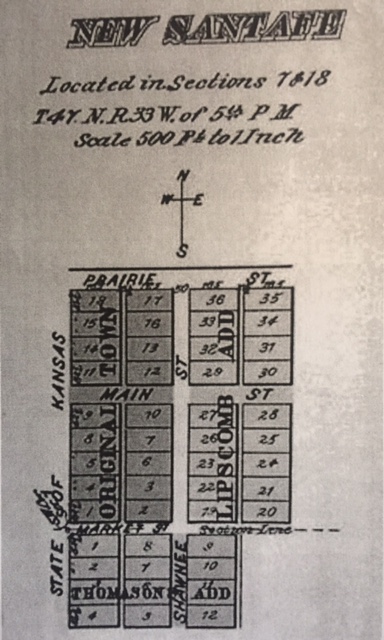 The Lipscomb Family headstones in the cemetery 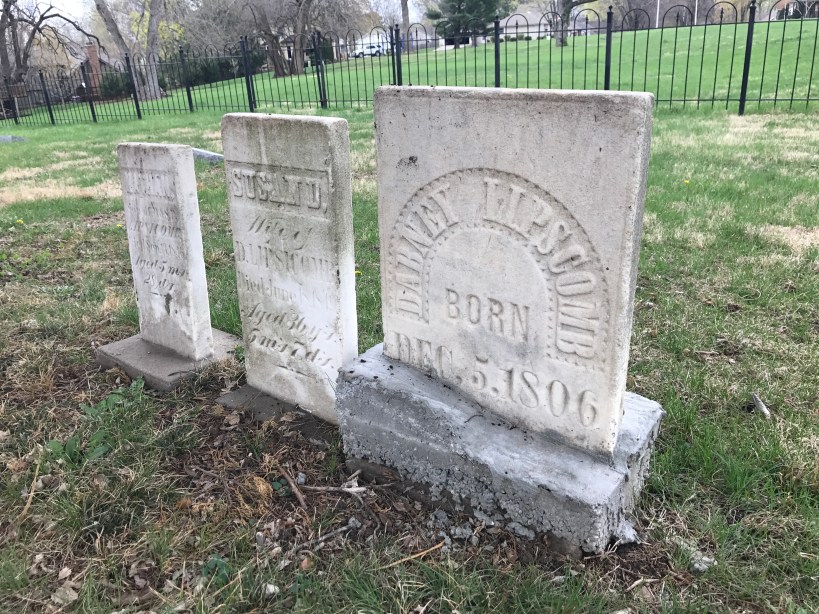 Undulations in the cemetery are the remnants of old wagon ruts 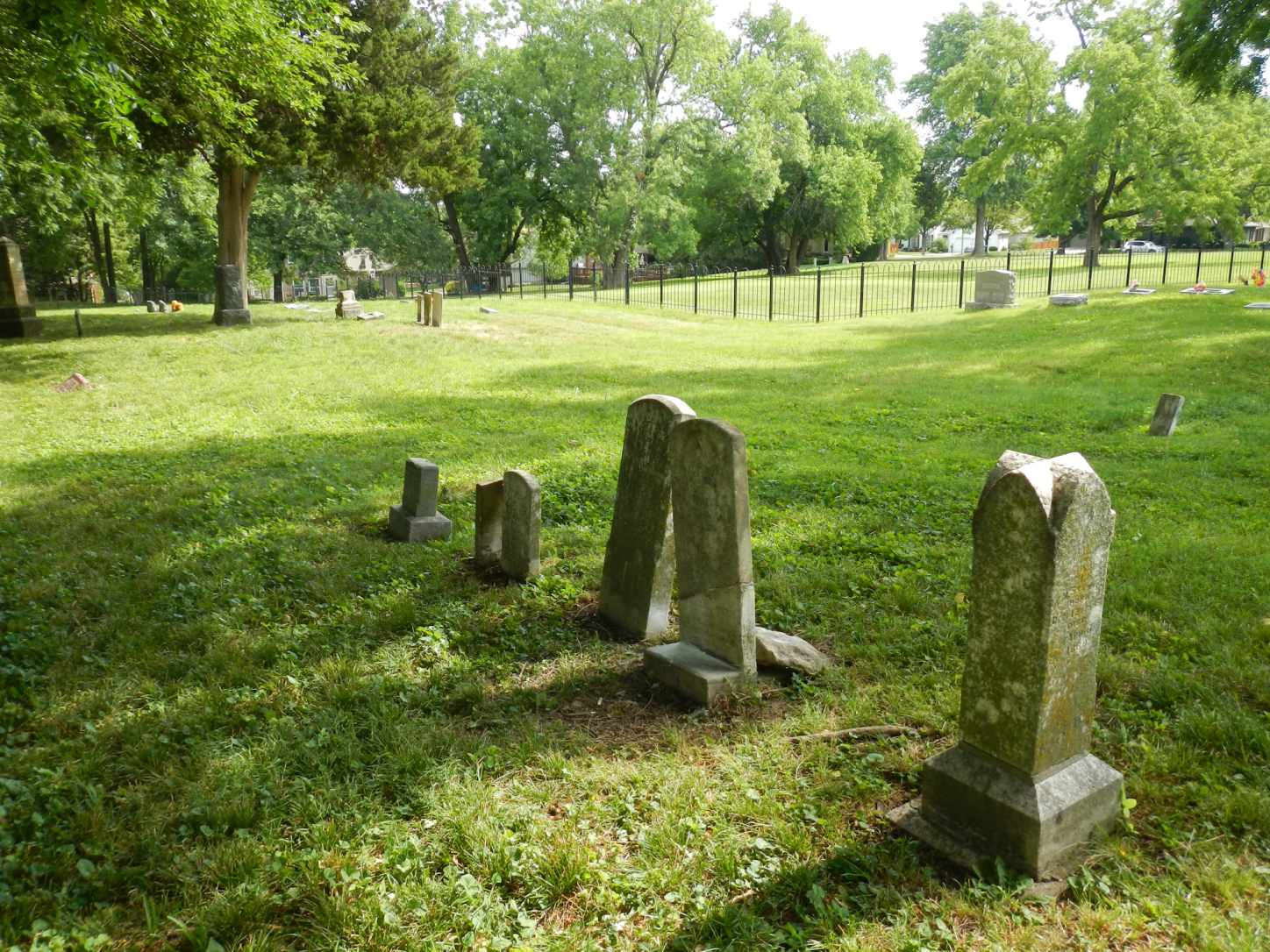 An interesting headstone in the cemetery... 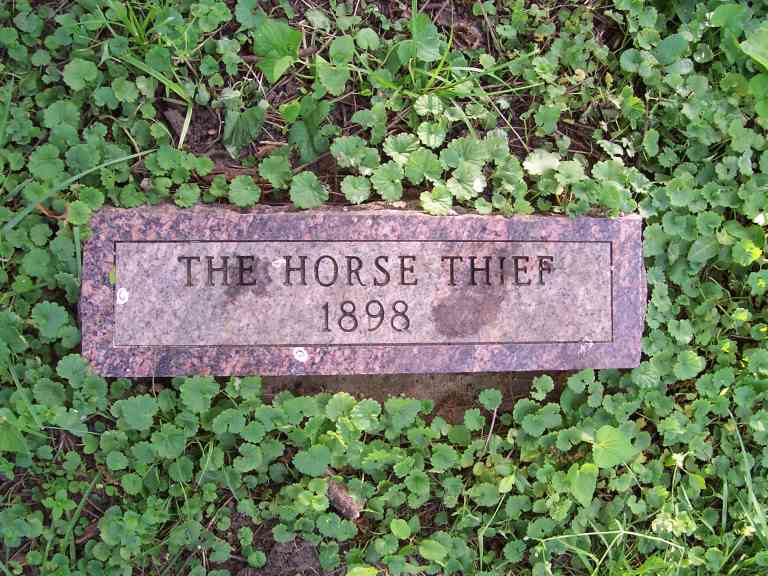 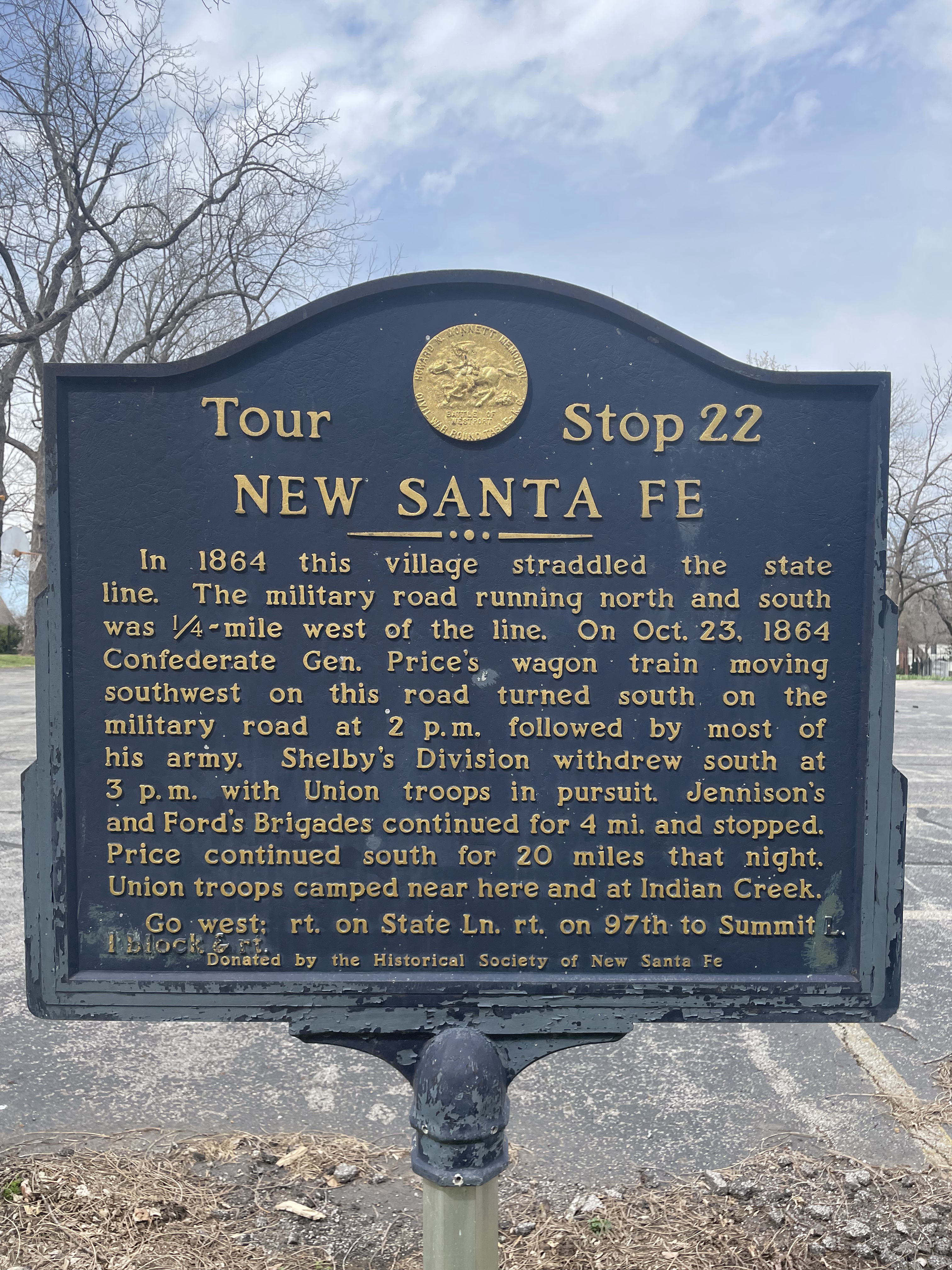 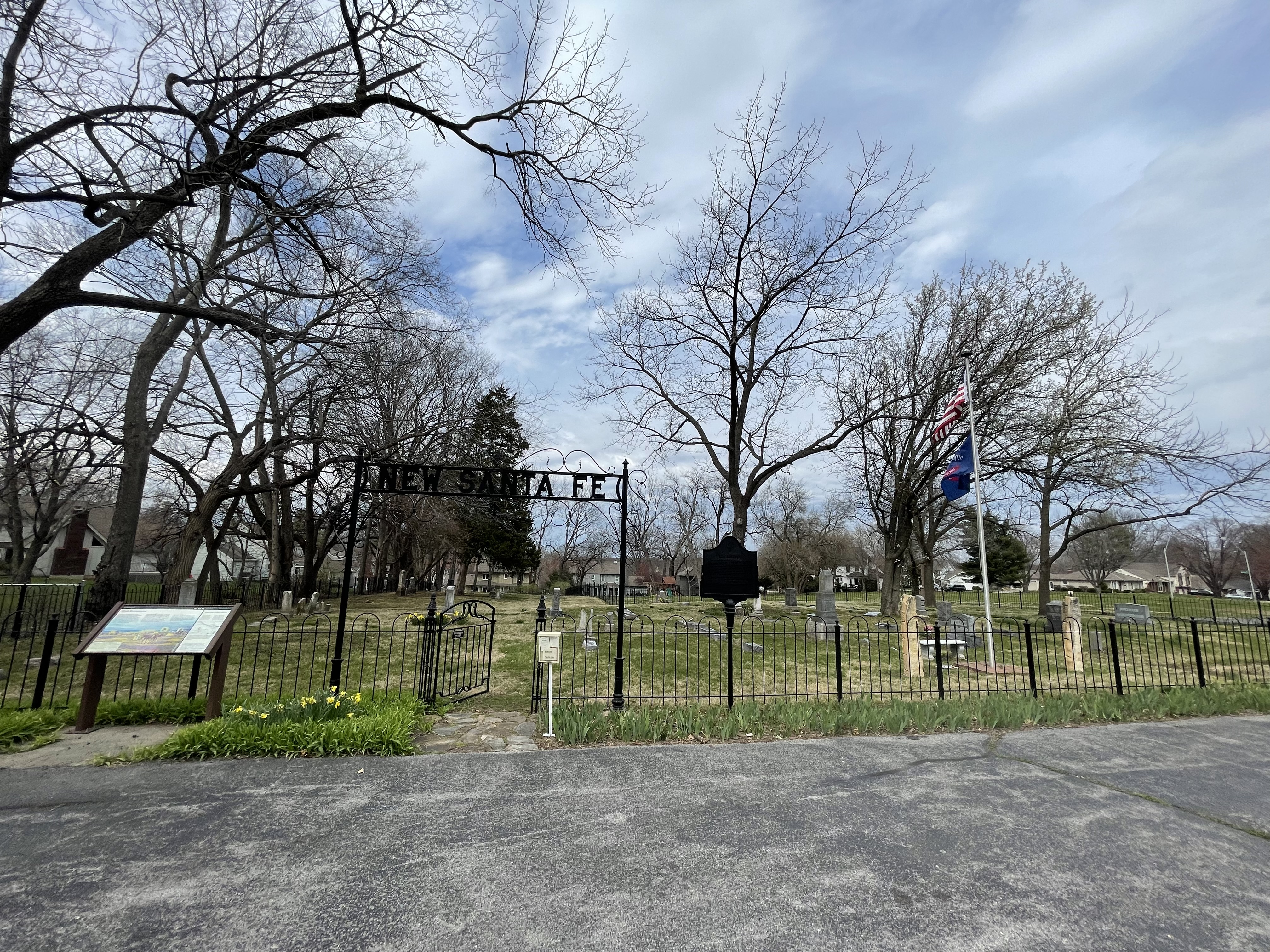 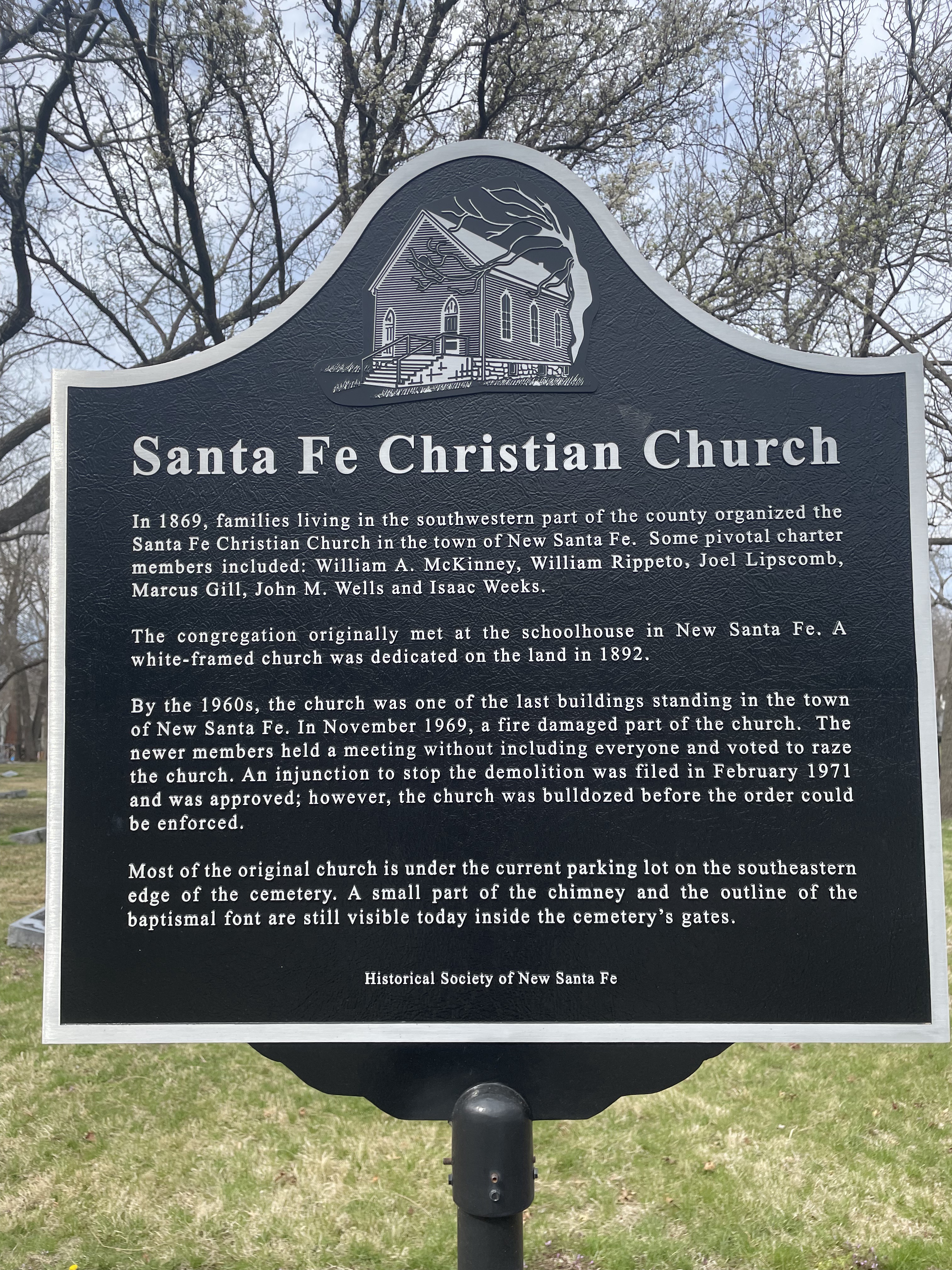 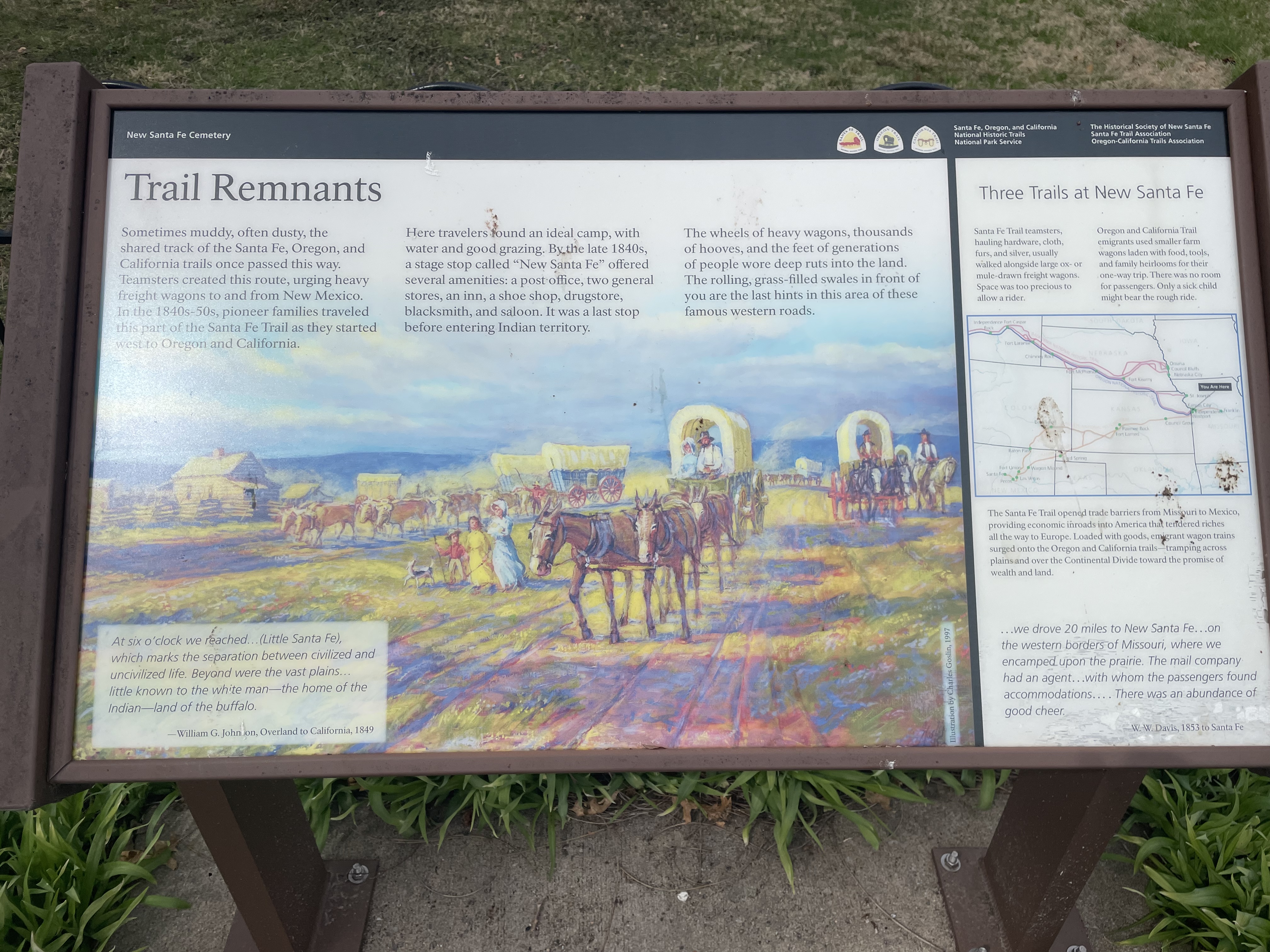 In the 1821, Missouri became a state, and the western border of the United States was redrawn. West of the Missouri state line was unincorporated territory from the Louisiana Purchase, occupied by Native Americans. Pioneers heading west crossed this border on the Santa Fe, Oregon, and California Trails. Wagon trains on the trails used the area now known as New Santa Fe as one of their first camping stops, thanks to the natural resources it provided. As early as 1833, a farmer named John Bartleson erected a log cabin along the trail here, which acted as a tavern to service passing travelers. Gradually, suppliers also popped up to outfit the wagon trains. The station became known as Blue Camp 20, because it was 20 miles from Independence (where many travelers began their journey), and it was next to the Little Blue River. [2]

Traffic along the Santa Fe Trail increased dramatically after the Mexican-American War ended in 1848, when the US annexed the Territory of New Mexico. Blue Camp 20 became incorporated as the town of New Santa Fe in 1851. Early settlers Dabney and Elizabeth Lipscomb owned the land and platted 18 lots for the townsite. Within a few years, the town consisted of “two general stores, a shoe shop, a drugstore, the Watson Place Inn, a blacksmith shop and the post office,” as well as a saloon, doctor’s office, and Masonic Lodge. The population of the community in 1860 was 670. The Red Bridge was built over the river in 1859, which further increased traffic as travelers no longer had to forge the river, diverting through New Santa Fe in place of the previously-favored Westport Landing further north.

New Santa Fe residents found themselves at the heart of the Border Wars that ensued in the 1850s between pro-slavery and anti-slavery forces, and later the Civil War. In 1864, Confederate Major General Sterling Price passed through New Santa Fe after his defeat at Westport Landing, a journey now known as Price’s Retreat. In the years after the wars, the town fell victim to bandits and outlaws. Like many small towns across the nation, New Santa Fe’s fate was sealed when the new Transcontinental Railroad bypassed it, and it eventually became a ghost town.

The New Santa Fe Cemetery is the only remnant of the town. The first graves in the cemetery date from the early years on the trails, when accidents as well as diseases like cholera were rampant. At that time, it would have been the westernmost cemetery within the borders of the United States. [4] Most of the earliest graves are unmarked, but the headstones of Dabney and Elizabeth Lipscomb, the founders of New Santa Fe, still stand today. The Lipscombs’ descendants deeded the cemetery property to the Santa Fe Christian Church in 1881. Since 1977, it has been managed by the New Santa Fe Cemetery Association. Wheel ruts created from countless wagons that traversed the three trails are visible in the cemetery grounds.