McLaughlin Air National Guard Base is home to the 130th Airlift Wing which was established in 1960. The base is located adjacent to Kanawha Airport which was built from 1944 to 1947. Established as an Air Commando squadron, the 130th flew and maintained U-10D Super Courier and the C-119 Flying Boxcar during the Vietnam War. In 1975, the Air Force replaced the unit's C-119s with the C-130 "Hercules" aircraft and the unit's mission shifted to providing transportation and tactical airlift support. During Operation Desert Shield from 1990-1991, members of the 130th were deployed throughout the globe in support of a variety of missions from tactical airlift support to medical services. In 1995, the 130th was expanded to the Wing level leading to the expansion of the base to include new facilities for training and aircraft maintenance. In recent decades, members of the 130th Airlift Wing have deployed to over a dozen bases throughout the Middle East in support of the Air Force's role in the Global War on Terrorism, Operation Enduring Freedom and Operation Iraqi Freedom. Although the 130th Airlift Wing was among the list of bases designated for closure under the 2005 Base Realignment and Closure (BRAC), West Virginia's Senators and Congressmen joined efforts of other politicians representing bases that were scheduled to close in a successful effort to reverse the decision. As a result, very few military installations closed following the 2005 BRAC report and the 130th Airlift Wing continues to fly airlift and train airmen in Charleston.

Brigadier General James Kemp McLaughlin served as the founder and commander of the West Virginia Air National Guard. During WWII, McLaughlin flew the B-17 in the 92nd Heavy Bombardment Group of the Eight Air Force. His actions were instrumental in preventing the Germans from developing an atomic bomb. Additionally, he contributed to the destruction of seventy percent of the German ball-bearing production facilities in Schweinfurt through air raids. In January of 2014, the 130th Airlift Wing was renamed McLaughlin Air National Guard Base in his honor. 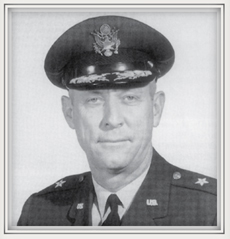 The last North American Aviation P-51 Mustangs in squadron service with the USAF were retired from the 167th Fighter Bomber Squadron, WV ANG on January 27, 1957. Aircraft No. 948 or “Wham Bam,” was reclaimed by the National Museum of the United States Air Force and is on display at the WV ANG Headquarters, in Charleston, WV. 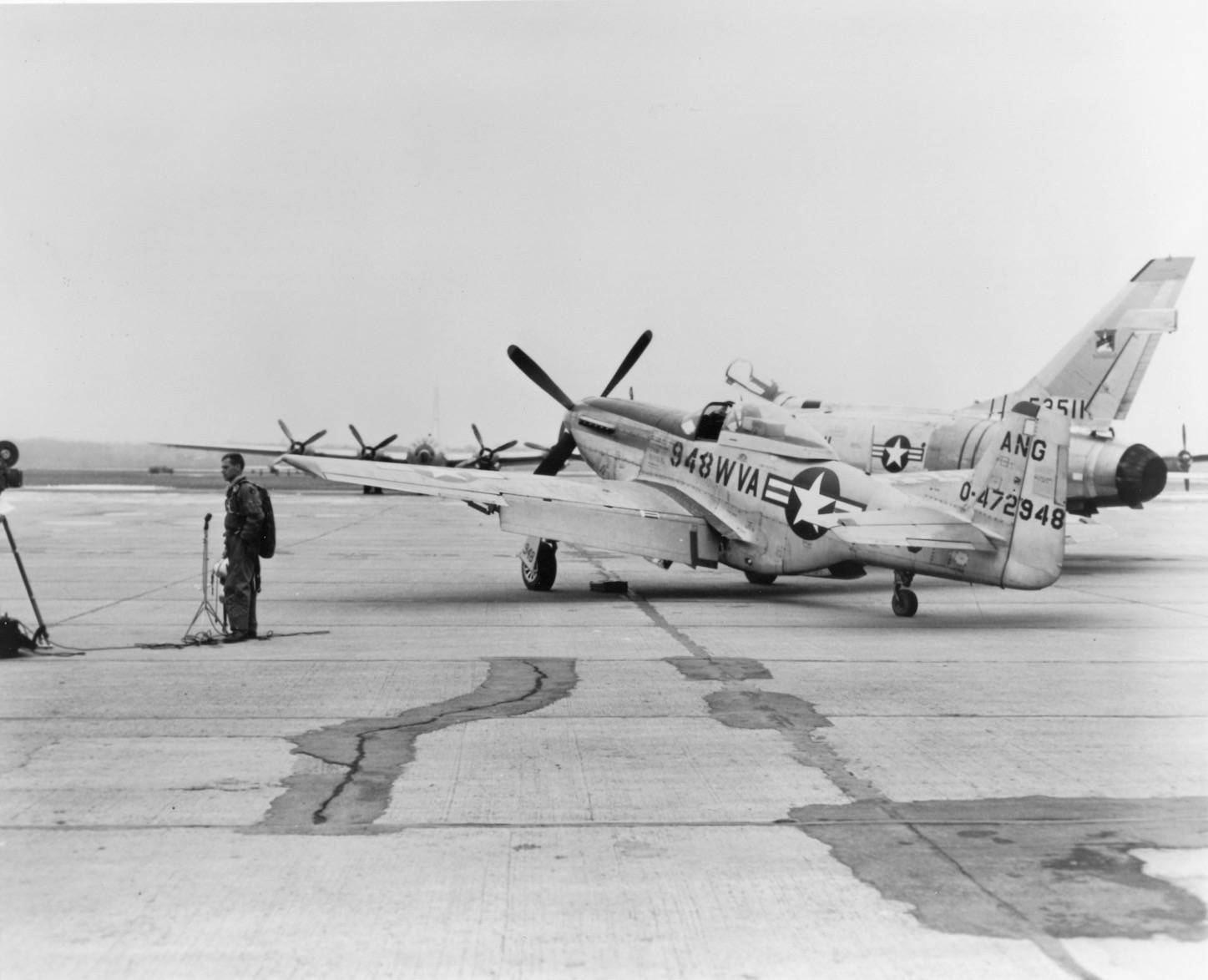 This photograph comes from 1981 when the, then, 130th Tactical Airlift Group, participated in Operation BRIGHT STAR, a multi-national war-fighting exercise near Cairo, Egypt. The 130th was the first Air National Guard Unit to participate in this high-level exercise. 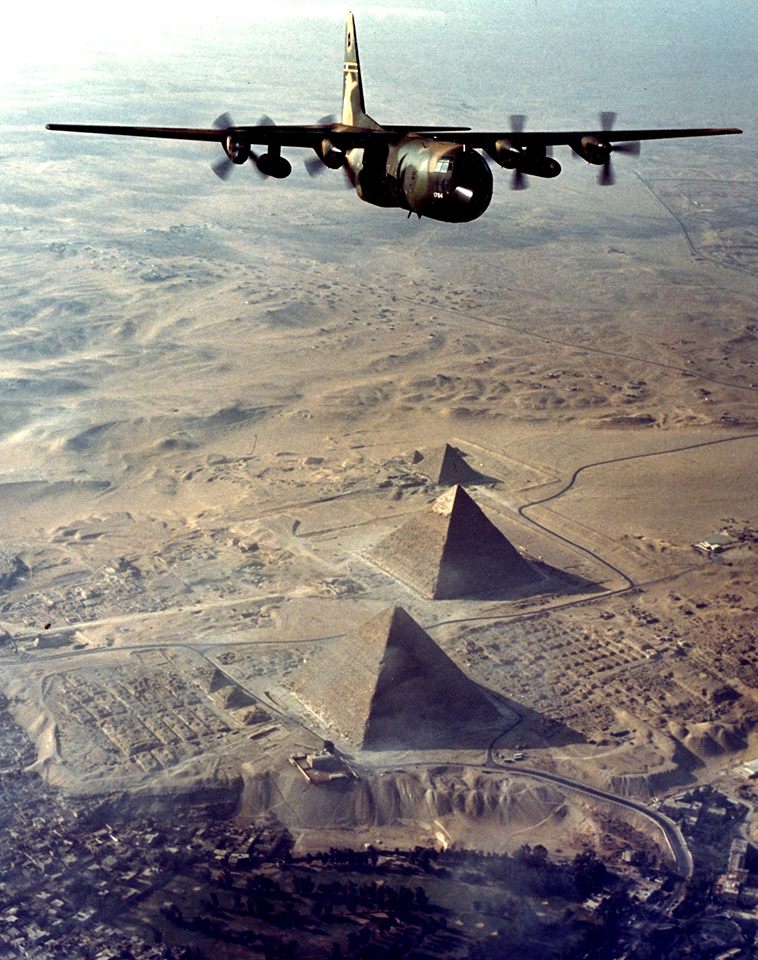 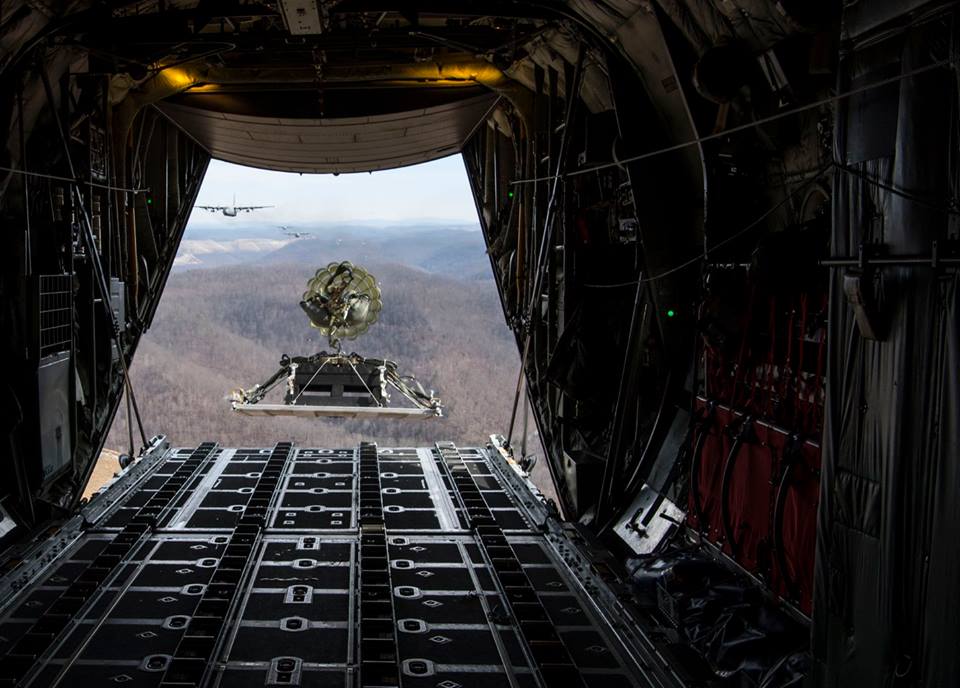 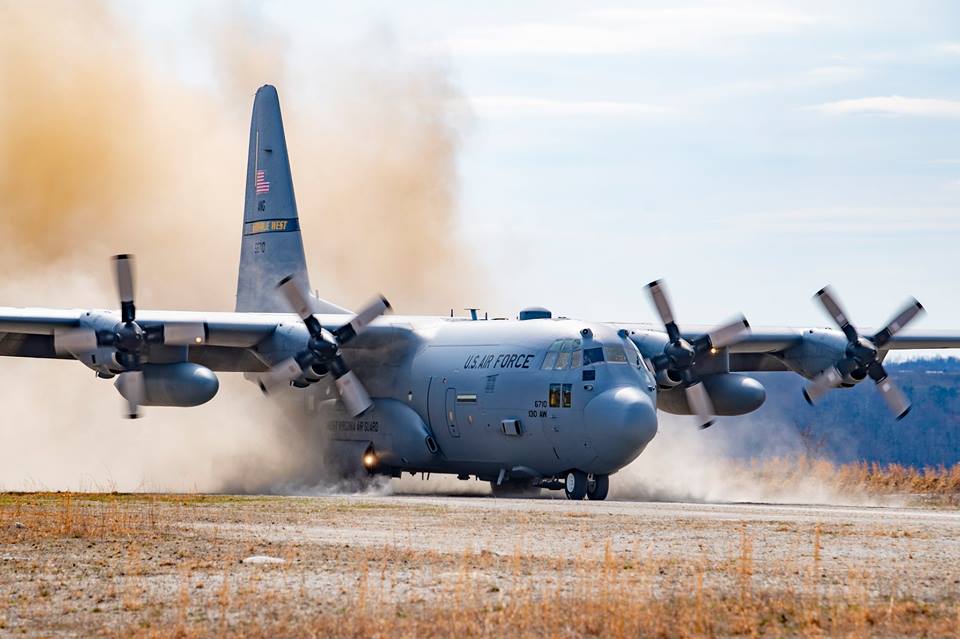 The 130th Airlift Wing is one of two West Virginia Air National Guard units currently operating in the state. The West Virginia Air National Guard originated as part of the 369th Fighter Squadron of the Eighth Air Force in the European Theater of Operations during World War II. During the conflict in 1944, the 369th was awarded the Presidential Unit Citation for outstanding action against German forces and earned six Battle Stars for the following campaigns: Normandy, European Air Offensive, Ardennes, Central Europe, Rhineland and Northern France. The 369th originally flew the P-47 Thunderbolt, a single-seat, single-engine fighter aircraft. The day after the squadron returned to the United States it was deactivated. Six months later, on May 24, 1946, it was designated as the 167th Fighter Interceptor Squadron and was federally recognized as an official Air National Guard unit on March 7, 1947. While the Kanawha Airport (now Yeager Airport) was being built, the 167th began training at a small grass field, Clark Field, on the outskirts of Saint Albans, WV. On November 3, 1947, Kanawha Airport was formally dedicated and the Air National Guard made Coonskin Ridge their home.

In addition to the P-47 Thunderbolt, the unit acquired additional aircraft such as the B-26 Invader aircraft, two Beech C-45 aircraft, and two C-47 “Gooney Birds”. In 1948, the P-47 Thunderbolts were replaced with P-51 Mustangs because of the combat kill ratio of the P-51 versus the P-47. At this time, the pilots of the WVANG where referred to as the “men with coon-tailed helmets soaring over the Kanawha Valley with wailing Merlin engines.” This led to the nickname of the Charleston pilots as the Coonskin Boys. In the early 1950s, the WVANG was called to serve in the Korean War where pilots flew 806 combat sorties in P-51 Mustangs and F-86 Sabres. The unit’s losses consisted of twenty-three killed in the line of duty and one prisoner of war, whom was captured in 1953 and released in 1955. When the troops returned home, a major change was bestowed upon the unit. In December of 1955, the P-51 Mustang was replaced by modern jet fighters but Aircraft No. 948 or “Wham Bam,” was reclaimed by the National Museum of the United States Air Force and can be viewed at the 130th Airlift Wing in Charleston today.

In the late 1950s, the 167th Fighter Interceptor Squadron moved to Shepherd’s Field in Martinsburg, West Virginia where it became the 167th Aeromedical Transport Squadron on April 1, 1961. Subsequently, on October 16, 1955, officials at Kanawha Airport were authorized to form a new squadron in Charleston that was officially designated as the 130th Troop Carrier Squadron. Once again, the responsibility of organizing such a unit fell on Lt. Col. James K. McLaughlin. The Curtis C-46D Commando, a twin-engine transport aircraft, was the first mission aircraft acquired for the newly formed 130th Troop Carrier Squadron. Its primary mission was hauling military cargo and paratroopers. By 1957, the C-46D Commando was replaced by the Grumman SA-16A and upgraded Grumman SA-16B, both air-sea rescue aircraft.

On July 1, 1960, the West Virginia Air National Guard was authorized to expand to a group level and was re-designated as the 130th Air Commando Group on January 16, 1962. Through these series of changes, the mission remained mostly the same. On Jul 1, 1963, the unit was re-designated as the 130th Air Commando Squadron and would go on to provide air support for “special forces” behind enemy lines.

One of the toughest obstacles for all SA-16 pilots was learning to land on the open sea at night. Pilots from the 130th were the first to master these landings and as a result, the 130th was given the assignment of training members of the Argentine Air Force in flying and aircraft maintenance of the SA-16. In 1963, another change in aircraft was in the works for the 130th. By the following October, the unit received six C-119C Flying Boxcars, a type of transport aircraft and six U-10B aircraft, a light utility transport aircraft. During the early spring of 1965, the 130th made history by being the first Air Guard unit to deploy outside the United States for a training exercise. Their two-week activation included 150 men, four U-10B aircraft, and four Boxcars. This exercise took place at Howard Air Base and Albrook Air Station in the Panama Canal Zone, where they were entirely self-sustained down to providing their own security and support personnel. By the end of 1965, the unit’s U-10B aircraft was temporarily replaced with the DeHavilland U-6A Beaver, a single engine utility transport aircraft, until 1967 when the second allotment of six U-10D aircraft arrived in Charleston.

During the 1960s and 1970s, the 130th participated in multiple international missions alongside over ninety other units. They were recognized as the best flying unit in the Air National Guard, receiving the Spaatz Trophy four times and the Air Force Outstanding Unit Award five times. On August 8, 1968, the 130th Air Commando Group was re-designated the 130th Special Operations Group which changed the nature of the unit’s mission and incorporated a variety of clandestine operations. In 1969, the unit received C-119G aircraft to replace the C-119C model. In October of 1975, the C-119L aircraft left Charleston and were sent to the Davis Monthan boneyard. During the winter of 1975, the 130th received eight C-130E Hercules aircraft from Clark Air Base in the Philippines. These aircraft had flown missions in the Vietnam War. The unit was then re-designated as the 130th Tactical Airlift Group; however the nature of their mission did not change. The original bullet patched C-130E models that arrived from the Vietnam War were replaced with eight C-130H models in 1986.

During the 1980s, the 130th and the 167th worked together in multiple humanitarian missions, which included delivering thousands of pounds of medical supplies to the Cebu Hospital, Mactan Island in the Philippines. In 1989, just in time for the 130th’s involvement in Desert Shield/Storm, the unit’s allotment of eight Hercules increased to twelve. Both of the WVANG units were committed to “Operation Desert Shield”. In the late summer months of 1990, the activation orders had arrived and the TAG commanded a volunteer package of sixteen C-130 aircraft. The “Operation Desert Shield” group based in the Middle East comprised of Air National Guard units from WV, TN, TX, MO, and DE, each providing personnel and aircraft. Members from the 130th Tactical Airlift Squadron (TAS) joined forces with the 181st Tactical Airlift Squadron -TX ANG, to create the functional organizational structure of the 1630th Tactical Airlift Squadron at Al Ain International Airport, Al Ain, United Arab Emirates. While deployed in support of the air operations of Desert Storm, the unit moved more cargo and troops in twelve days than the entire Berlin Airlift. Shortly after, the troops were deactivated and returned home in 1991.

On October 1, 1995, the 130th Tactical Airlift Squadron was expanded and re-designated as the 130th Airlift Wing. In the 2000s, the unit played a pivotal role in supporting efforts for the Global War on Terrorism, Operation Enduring Freedom and Operation Iraqi Freedom. The unit has deployed in support of USAF missions in Afghanistan, Iraq, Qatar, Kuwait, Saudi Arabia, Germany, Guantanamo Bay, Kyrgyzstan and multiple other locations around the world. In recent years, the unit has responded to local disasters like the devastating flood in 2012, Superstorm Sandy, and Operation Summer Rain in 2016. On January 8, 2014, the Charleston Air National Guard base was renamed McLaughlin Air National Guard Base in honor of the unit’s founder and first commander, Retired Brigadier General James Kemp McLaughlin. Today, with eight C-130H3 aircraft, the 130th Airlift Wing continues to fly airlift, airdrop, and air evacuation missions at both home station and overseas locations.