This historic courthouse was constructed by Thomas Mercer in 1836 and replaced the original Giles County courthouse that was funded by the town's namesake, Capt. George Pearis. In May 1862, the courthouse was the site of a confrontation between Union and Confederate forces, a skirmish that resulted in damage to the windows of the cupola and bullet holes being left in the weather vane. The adjacent sheriff's office and jail was constructed between 1937 and 1938, which replaced the previous irreparable jail. In 1982, the courthouse was added to the National Register of Historic Places and the Virginia Landmark Registry. In 1992, the Giles County Sheriff's Office and Jail was added to the National Register as one of nineteen buildings (this list includes the courthouse) comprising the Pearisburg Historic District. Beginning in 2005, work began on a renovation project that would honor the building's historical integrity but also add modern touches to the courthouse so that it could achieve ADA compliance and continue to be utilized in the future.

The cupola and portico are clear to see in this image. 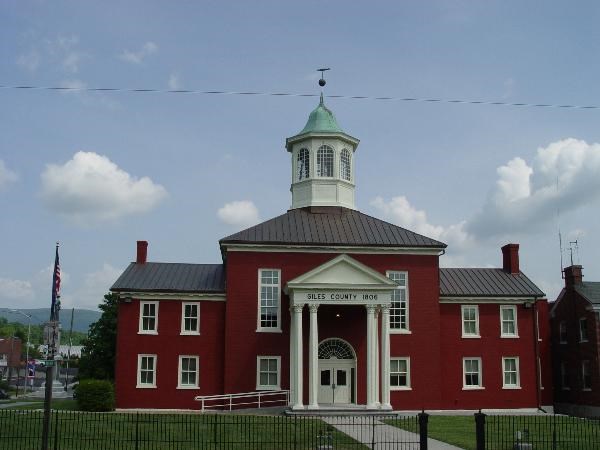 This image illustrates a flanking wing, which was added after initial construction.

In 1836, Thomas Mercer agreed to build the currently standing Giles County Courthouse for $5,000 dollars. This replaced the first courthouse building, which was erected in 1808 and funded by Pearisburg's namesake, Capt. George Pearis, who is buried in the local Pearis Cemetery. The original construction was an "I" shape building in the Federal style, but flanking wings were added shortly after initial construction. The portico was added in 1900.

In 1862, during the Civil War, the courthouse was the sight of a confrontation between Union and Confederate soldiers. Lt. Col. Rutherford B. Hayes, who would later be elected as the nineteenth president of the United States, and the Union soldiers under his command were overwhelmed and forced to leave Pearisburg by Confederate forces under the control of Brigadier General Henry Heth. This confrontation reportedly resulted in minor damages to the courthouse, such as broken windows in the cupola and bullet damage to the weather vane, and a small number of casualties.

Between 1937 and 1938, the adjacent sheriff's office and jail was constructed to replace a previously constructed dilapidated jail. The construction was financed by the public, and the county erected a sophisticated Colonial Revival brick building. Its domestically scaled front office section, detailed with a pedimented central pavilion and one-story Ionic portico, is joined at the rear by a three-level cell block.

On July 20th, 1982, the courthouse was added to the Virginia Landmark Registry, and on September 9th, 1982, it was added to the National Register of Historic Places for being one of only three buildings that remain standing in Pearisburg from the nineteenth century (the others being the Andrew Johnston House and the Western Hotel/Thomas Building) and for the architectural and political significance of the building. Additionally, the Giles County Sheriff's Office and Jail was placed on the Virginia Landmark Register on December 11th, 1991, and the National Register of Historic Places on January 30th, 1992, as one of nineteen buildings comprising the Pearisburg Historic District for the political and architectural significance of the building. The courthouse, though already placed on the Register, was also used to demarcate the parameters of the historic district. Both buildings sit on the Public Square, the sole contributing site in the historic district, that the town of Pearisburg developed around and in response to.

In 2005, efforts were made by the Giles County Board of Supervisors to effectively ensure that the Giles County Courthouse achieved ADA compliance and to establish a sense of cohesion between the various sections of the Courthouse. The Mid Atlantic Construction Magazine awarded the Award of Merit for Historic Recognition to those involved with the Giles County Courthouse renovation project because the plan strikes a delicate balance between maintaining historical integrity and embracing modern elements, such as the addition of elevators, to promote the utilization of the courthouse for future generations. Today, both the courthouse and the sheriff's office reflect the growth and development of Pearisburg from a small town to a booming economic center in the early twentieth century.