The Battle of South Mills took place on April 19, 1862 in Camden County, North Carolina. The Confederates were building ironclads at Norfolk. Union Army Major General Ambrose E. Burnside planned an expedition to destroy the Dismal Swamp Canal locks to prevent transfer of ships to Albemarle Sound. The command was given for Brigadier General Jesse L. Reno to carry out the operation. The battle ended in a Confederate Victory. 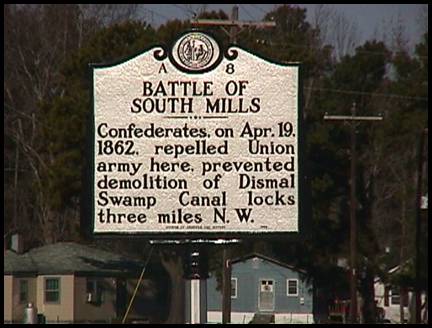 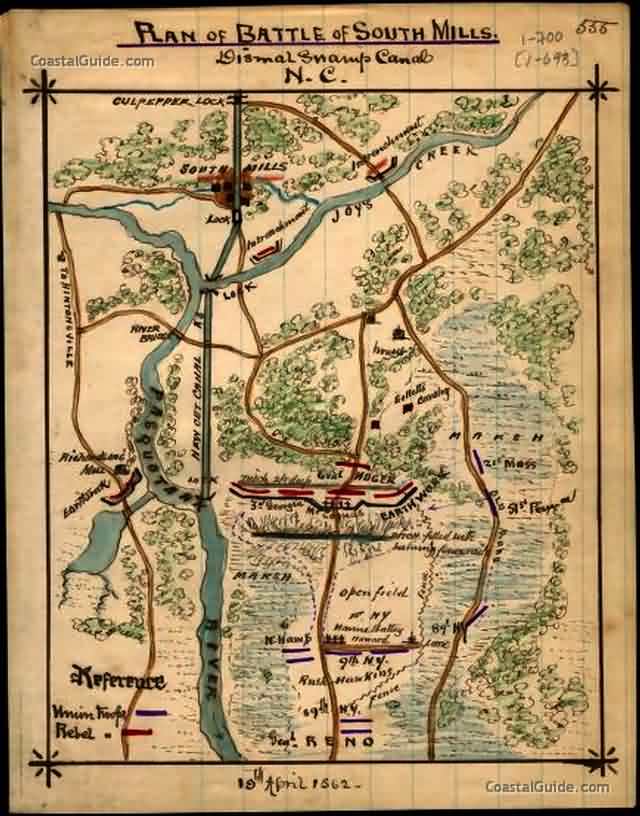 The Confederates were building ironclads in Norfolk and had planned to pass their small gunboats through the canal to Albemarle Sound.  They were also planning to threaten Union forces in the region.  Major General Ambrose E. Burnside found out about the Confederate's plan and decided to destroy the Dismal Swamp Canal locks in order to block the transfer of ships.  The order to have Brigadier General Jesse L. Reno carryout the operation was given.  Burnside went on an expedition cooperating with Federal gunboats moving up the Pasquotank River and Reno commanded the expedition of 3,000 men.
On April 19, Reno and his forces arrived four miles from Elizabeth City.  The local Confederates had prepared for the enemy.  These Confederates were led by Colonial Ambrose R. Wright.  They dug a ditch across the road and filled it with wood to.  When the Union came near they caught the ditch on fire in order to block any Union movement.
Wright commanded 900 men and had five companies and three guns in a ditch crossing a road waiting on the Union forces.  When Reno's troops arrived they were ready for battle and began attacking at first sight.  The Confederate troops were outnumbered by the Union troops but managed to hold them off for four hours until they were out of ammo and supplies.  Wright and his troops fell back to another position but Reno's troops were too tired to follow.  Reno heard of Confederate reinforcements coming from Norfolk and abandoned the expedition.  The Union had thirteen men killed, one hundred and one wounded, and thirteen missing while the Confederates lost six men, had nineteen wounded, and three captured.