Over 240 years old, the Murray-Dick-Fawcett House is one of Alexandria's oldest historic 18th-century homes. Compared to other structures from the period, it is believed to be the least altered in the region of Northern Virginia. Historians consider it a microcosm of a single-family home of the period as it features a living room, kitchen, bedrooms, and slave or servants quarters all under one roof. An individual owns the home today as a private residence but the public is allowed to visit the house twelve times per year for special events.

Built in 1775, the Murray-Dick-Fawcett House is one of the oldest dwellings in Alexandria. 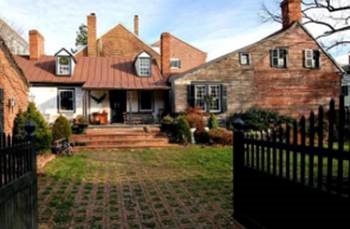 The house was built 1775 by a local Blacksmith named Patrick Murray. At the time, it was one of the few structures in the immediate area and beyond the original 1749 town limits. Eventually, the house became part of the city in 1790 as the town grew. Murray built an addition as well as a livery stable in the mid-1780s. He got into financial trouble and was forced to sell the home in 1792 to a man named Samuel English, who rented out the house until 1794 when it was sold to doctor Elisha Cullen Dick. Dick was the physician who treated George Washington at his death in 1799. Dick only lived in the home for two years as he, too, got into debt and was forced to move (he eventually went bankrupt in 1801).

A series of owners occupied the home in the coming years. In 1816, a man named John Douglas Brown bought it; his descendants would own the house for the next 184 years and they made few changes to the old dwelling. The U.S. Department of the Interior recorded the house in the Historic American Buildings Survey in 1936.

"A gem of a house on Prince Street." Alexandria Times [published by the Office of Historic Alexandria]. July 20, 2017. https://www.alexandriava.gov/uploadedFiles/historic/info/attic/2017/Attic20170720Prince517.pdf.

"The House and Garden." City of Alexandria. Accessed August 17, 2019. https://www.alexandriava.gov/historic/info/default.aspx?id=97662.