On April 28, 1863, Confederate forces, under Brigadier-General Albert G. Jenkins, leaving from Hamlin, WV on their way to Pt. Pleasant, WV to attack a large federal fort located there, skirmished with Federal troops at Hurricane Bridge. Camped on the west side of Hurricane Creek was the 13th (West) Virginia Volunteer Infantry under Colonel W. R. Brown. After five hours of firing from both sides, Gen. Jenkins withdrew from the fighting and continued up Hurricane Creek Road to the Kanawha River.

The historical marker can be found tucked away behind the sign welcoming people to Hurricane. 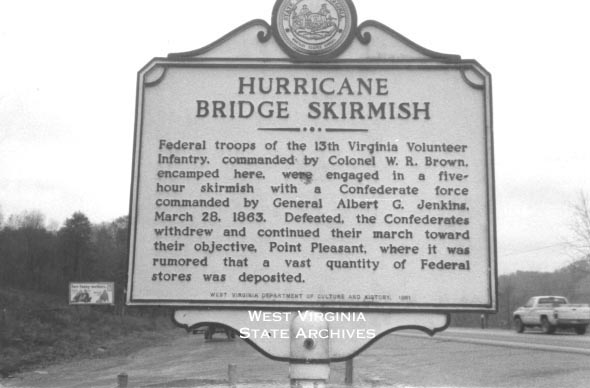 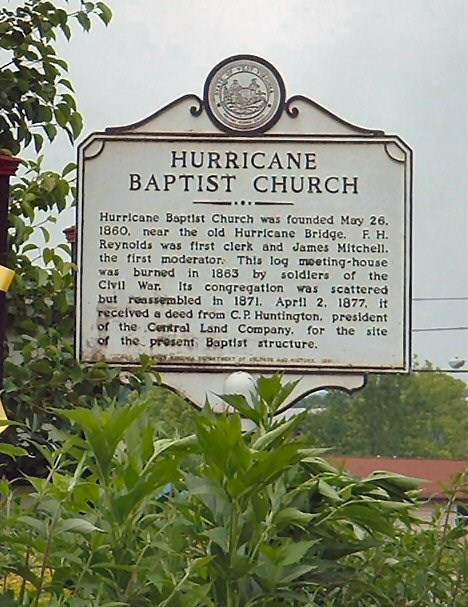 General Jenkins' cavalry brigade were on their way to Point Pleasant to seek a federal fort there. They went on foot, raiding the Kanawha valley, because their horses were in North Carolina for the winter. They left camp in Hamlin the previous day and by sunrise on the 28th, they reached Hurricane Bridge.
There the Confederate forces met the 13th Volunteer Virginia Infantry under Col. Brown, who were camped on the west side of the creek. Confederate command sent a request to Brown for him to surrender, yet Brown declined to surrender. 5 hours of fighting occurred, where the Confederates surrounded the federal troops on three sides, using three nearby hills to shoot from, using rifles and sharpshooters. The Union infantry held their positions, incurring a small number of casualties (4 dead, 3 wounded). Jenkins withdrew his forces from the fight, took cover behind the hills, and continued on his way up the Kanawha valley by way of Hurricane Creek Road.
The Confederate wounded left behind by Jenkins were captured and it was learned that the 150 or so Union troops had held off more than 500 Confederates. Col. Brown sent the details of the negotiations, battle, and outcome in a letter to Captain James W. Johnson. On April 30th, an M. V. B. Edens wrote in verse what transpired that day, portraying the Confederate soldiers as barefooted hungry objects of pity, and the Union soldiers as brave fighting men, and published in the Point Pleasant Weekly Register.
At some point during or after the skirmish, the Hurricane Baptist Church and portions of the town nearby burned down. The town and church were rebuilt after the war. Since 1998, the city of Hurricane has celebrated the anniversary of this battle with two reenactments, Scary Creek, and Hurricane Bridge in Hurricane's Valley Park.