The likely location of the farm once owned by Andrew Jackson Chesnutt, father of author Charles Chesnutt. The farm is now on industrial-zoned property that borders the Cape Fear River. Access is likely limited and any sightseeing is inadvisable. Charles Chesnutt himself never actually owned the property but did live here during his youth.

The shaded area contains roughly 39 acres belonging to three different entities. It is bounded on the north by properties that once belonged entirely to the Brewington family - the family still retains much of the land nearer to Wilmington Highway. 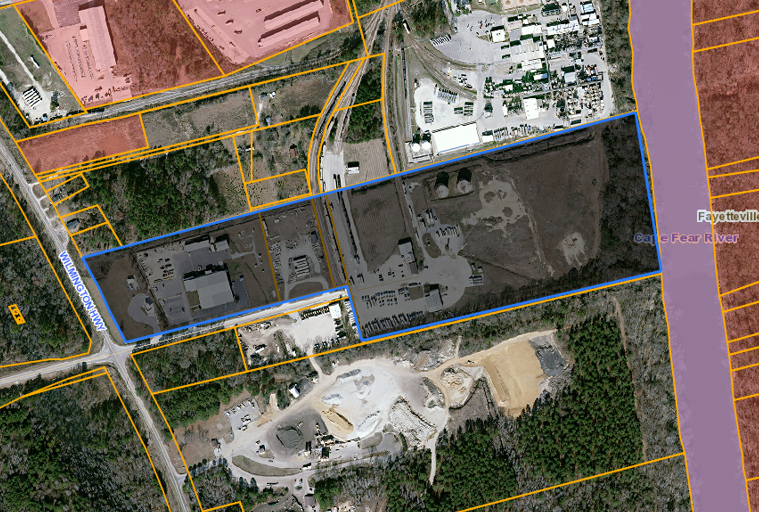 According to his journals, Charles' father "Andrew Chesnutt had failed as a shopkeeper and taken up farming in 1874" (76).

In Sylvia Render's book on Chesnutt, she writes that Andrew "moved the family to his farm two miles down the Wilmington Road" (18).

In Charles' work of fiction, "Goopherd Grapevine", the following description describes the journey to a family farm as follows:

"We drove out of town over a long wooden bridge that spanned a spreading mill-pond, passed the long whitewashed fence surrounding the county fairground, and struck into a road so sandy that the horse's feet sank to the fetlocks. Our route lay partly up hill and partly down, for we were in the sand-hill country; we drove past cultivated farms, and then by abandoned fields grown up in scrub-oak and short-leaved pine. and once or twice through the solemn aisles of the virgin forest, where the tall pines, well-nigh meeting over the narrow road, shut out the sun, and wrapped us in a cloistral solitude" (Chesnutt).

The 1874 deed (Book 61, Page 575) for the farm mentions that it covers 39 acres, situated between Wilmington Road and the Cape Fear River.

The deed specifically mentions that the property begins "at an oak on the Cape Fear River, Brewington's lower corner." Brewington seems to be a reference to George Brewington, whose descendants still own parcels of land about two miles south of Fayetteville along Old Wilmington Road.