The historic home was completed in 1928 and designed by local architect Hugo Kuehne who also built several other notable Austin buildings from the 1920s through the 1950s. The name of this historic home references two of resident families. University of Texas economics professors, Robert A. and Linda Cox. Linda sold the home in 1948 to Larry Inge Crad­dock, a successful entrepreneur who operated a diverse set of businesses. The home was completed in the years leading up to the Great Depression when the nation enjoyed an economic boom and when Austin population grew dramatically. However, the city also actively segregated its African American residents from its white citizens and this neighborhood and many others in the city were open only to white families until the modern civil rights movement brought attention to housing discrimination and neighborhood segregation. 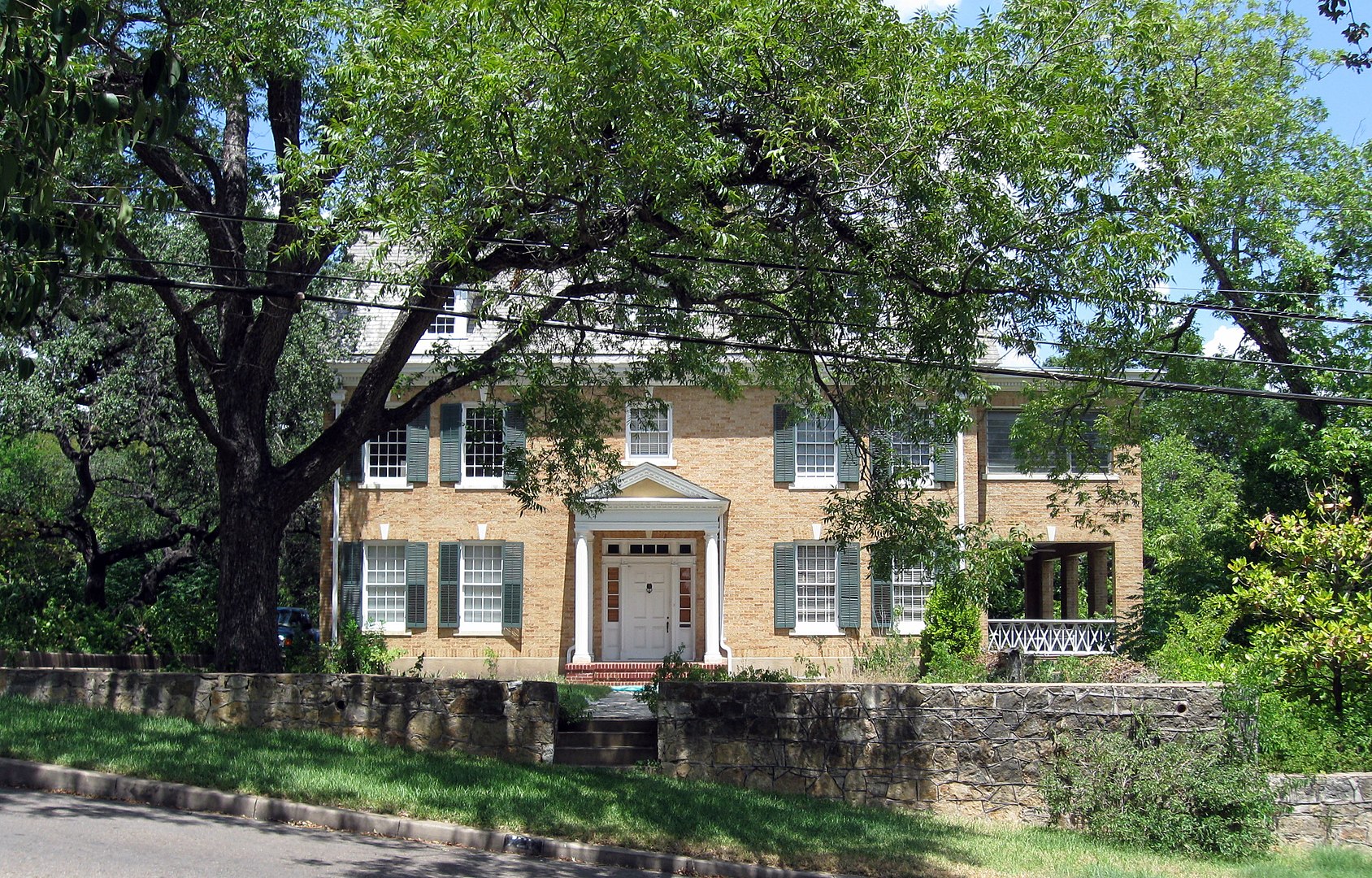 he Cox-Craddock House (1928) derives its name from its two primary occupants: Robert Alameth Cox and Larry Inge Craddock. And, the home was built at a time when Austin ostensibly made segregation a city policy. Thus, the historic house represents a part of Austin's society that differed from its Afican American counterparts largely forced to live south of the Cox-Craddock home, in East Austin. Cox lived in the house from its construction in 1928 until his death in 1947.  The house is an excellent example of the Colonial Revival style, which reflects on the skill of its lauded, local architect Hugo Franz Kuehne.
When Austin's Stark Subdivision emerged (which ultimately included the Cox-Craddock home), the city Austin was in the midst of a population boom, growing from 34,876 in 1920 to an estimated 50,000 in 1925, according to the 1926 Texas Almanac. Before 1920, the area remained mostly undeveloped.  Hugo Kuehne constructed a string of luxurious houses (including his own) enjoying a diverse set of architectural styles in the neighborhood including the later building of the Cox-Craddock House in 1928.
The emergence of these homes arrived concurrently with Austin's move to segregate African Americans from the rest of the community. As noted in the Clio Project article, "How Austin Became Segregated: The City Plan of 1928,"  the all-white City Council actively pursued techniques, from manipulating utilities and property values to employing restrictive covenants, to push African Americans into East Austin, a few miles southeast of the neighborhood where the Cox-Craddock House stands.
The Cox-Craddock exemplifies the Colonial Revival style with its classical porch, columns and ornate detailing. Kuehne thoughtfully arranged the first floor as a space intended for large formal gatherings.  The first floor also includes expansive living and dining rooms, as well as a library, all of which could be accessed by guests. Throughout the house, both in the interior and exterior, one can easily find luxurious features and detailing, including hand-crafted wood bookcases in the library and a carved wood fireplace mantel.
Robert Alameth Cox and his second wife, Linda, were both economics professors at the University of Texas. Unfortunately, there exists little record of Cox's involvement at the university. Larry Inge Craddock bought the House from Robert's widow Linda Lancaster Cox in 1948. Craddock was a successful and wealthy entrepreneur who owned various businesses. Craddock owned miniature golf courses, gas stations, a juice drink company, a pencil dispenser company, and several commercial properties in downtown Austin.
The architect, Hugo Kuehne, was born in Austin, Texas, on January 20, 1884. He attended the University of Texas and earned a degree in Civil Engineering. Kuehne then went on to attend (on scholarship) the Massachusetts Institute of Technology where he received his Master of Architecture. After two years in Boston, he returned to Austin and subsequently took a job at the University of Texas as an Adjunct Professor. While there, Kuehne created the university's School of Architecture. Kuehne remained at the university for five years before leaving to open a private practice where he quickly gained local fame.  fIn 1944, Kuehne was awarded Fellowship status by the American Institute of Architects.
Kuehne designed numerous, prominent Austin buildings from the 1920s through 1950s. He designed the Public Library (now the Austin History Center), the Ritz Theater, the Commodore Perry Hotel (1950) as well as commercial projects such as the International Life Building, American National Bank, and the Texas Department of Public Safety building. Kuehne also served on the city planning commission, worked with the beautification program, an instrumental in developing Austin's public park system. In 1953, the city recognized Kuehne's work by nominating him for the award for Austin's Most Worthy Citizen.
To view the home now is to see a part of Austin's wealthy society that thrived during the "Roaring 20s." The luxurious home was designed by one of the most pre-eminent Austin architects, demonstrating the prominence of the house, as well as the neighborhood. It also stands in contrast to the societal forces that pushed African Americans to another part of town at the same time this house emerged.