Madonna of the Trail (Upland, CA)

One of 12 identical statues depicting white pioneer women migrating along 19th-century western trails. Commissioned by the Daughters of the American Revolution (DAR), they were dedicated in 1928-29 in 12 states stretching from Maryland to California. California's "Madonna" holds power in local Upland popular culture.

Madonna of the Trail, Upland, California. Photo by Cynthia Prescott. 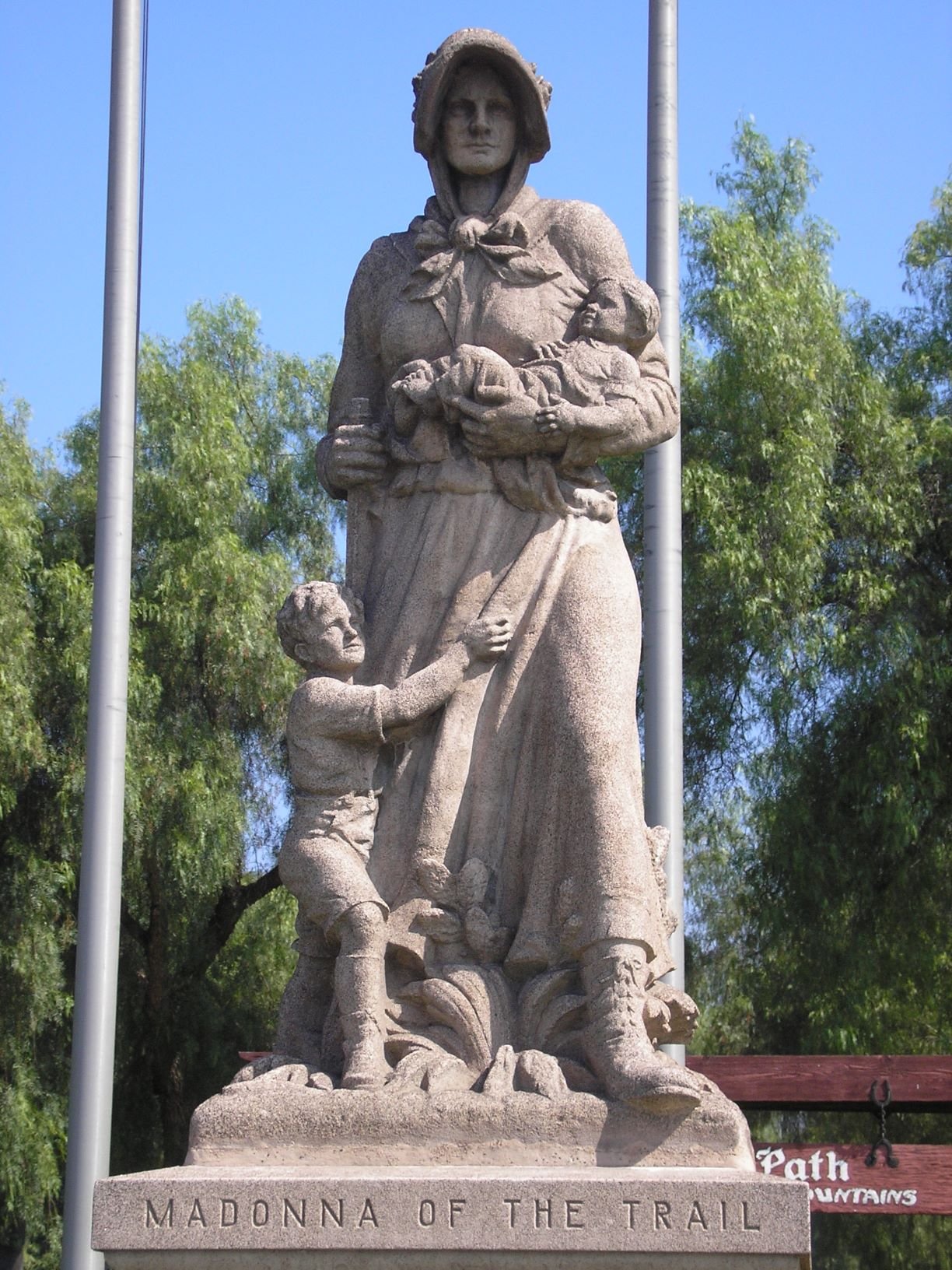 The statues were cast from algonite (a form of cast stone produced from a mixture of crushed marble, Missouri granite, stone, cement and lead ore) at the cost of $1,000 per statue. The statues were placed along key white migration routes, such as the early-19th-century National Road (later U.S. Route 40) and Santa Fe Trail (later the infamous Route 66). But the precise location of the monument within each state was selected based on both the site’s historical significance and the influence of local DAR and National Old Trails Association chapters.

The Ontario and Upland DAR chapters dedicated California's Madonna of the Trail on February 1, 1929. Eighty-one-year-old Carolyn Emily Cook, who migrated overland to California as a young child, unveiled the statue. One hundred carrier pigeons were released as Clark removed the covering.

A parade celebrating the dedication told the history of California over more than a century of Euro-American settlement. It emphasized progress from a Native American past to white-dominated present.

Over time, most Americans forgot about the Madonna of the Trail statues, including Upland's. But the more diverse suburban Upland, California’s population became, the stronger that community’s investment grew in their Pioneer Mother Movement-era statue.

Established in the 1880s, postwar interstate highway construction transformed agrarian Upland into a bedroom community for burgeoning Ontario. Whites, African Americans and Latinos escaping nearby Los Angeles’ rapid growth and urban unrest converged with immigration from Latin America and Asia. By the early 21st century, Upland’s population--like that of Southern California overall--grew quite diverse. But Upland remained much more white than neighboring Ontario, which was 69.0% Hispanic or Latino, and only 18.2% non-Hispanic white.2

As Anglo-Americans lost their majority status, Uplanders embraced their Madonna of the Trail as an emblem of white middle-class cultural norms. One Upland resident proclaimed in 2011 that the Madonna was crying because she--along with her community--had recently discovered that the size of City Manager Robb Quincey’s annual salary. Similarly, that same year a local columnist likened a coming Shakespeare production to seeing “a full frontal nude Madonna of the Trail in the middle of Euclid Avenue.”3 Upland's Madonna of the Trail thus enjoys renewed relevance nearly a century after its erection.