This plane was most recently used for ground training in Memphis and was seen there during 1975. Although it wore Blue Angels colors, it never served as one of the Blue Angels aircraft. The Douglas A-4 was developed as a jet-powered attack aircraft to replace the propeller-driven AD or A-1 Skyraider. Once designed, the aircraft weighed only half of the Navy’s specification and it’s small wing did not have to be folded for carrier stowage. The small Skyhawk soon received nicknames like “Scooter”, “Kiddiecar”, “Bantam Bomber”, and “Tinker Toy Bomber.” Each of these was a misnomer for this powerful aircraft. The A-4 pioneered the concept of “buddy” air-to-air refueling allowing the aircraft to supply others of the same type, eliminating the need of dedicated tanker aircraft. The A-4 could also make an emergency landing on two drop tanks which put the aircraft out of service for a few hours. The first prototype first flew in 1954 and deliveries began in 1956. The aircraft had a long life and remained in production until 1979, with 2,960 aircraft built, including 555 two-seat trainers. The A-4 was chosen for the Blue Angels flight demonstration team. The A-4 was used extensively in the Vietnam War. The two-seat trainer version, the TA-4J, replaced the TF-9J Cougar until it was replaced by the T-45 Goshawk. They were retired from front line squadrons in 1978. The Marines began retiring them in the mid-1980s and were complete by 1994. The US Navy retired their last aircraft in 2003. 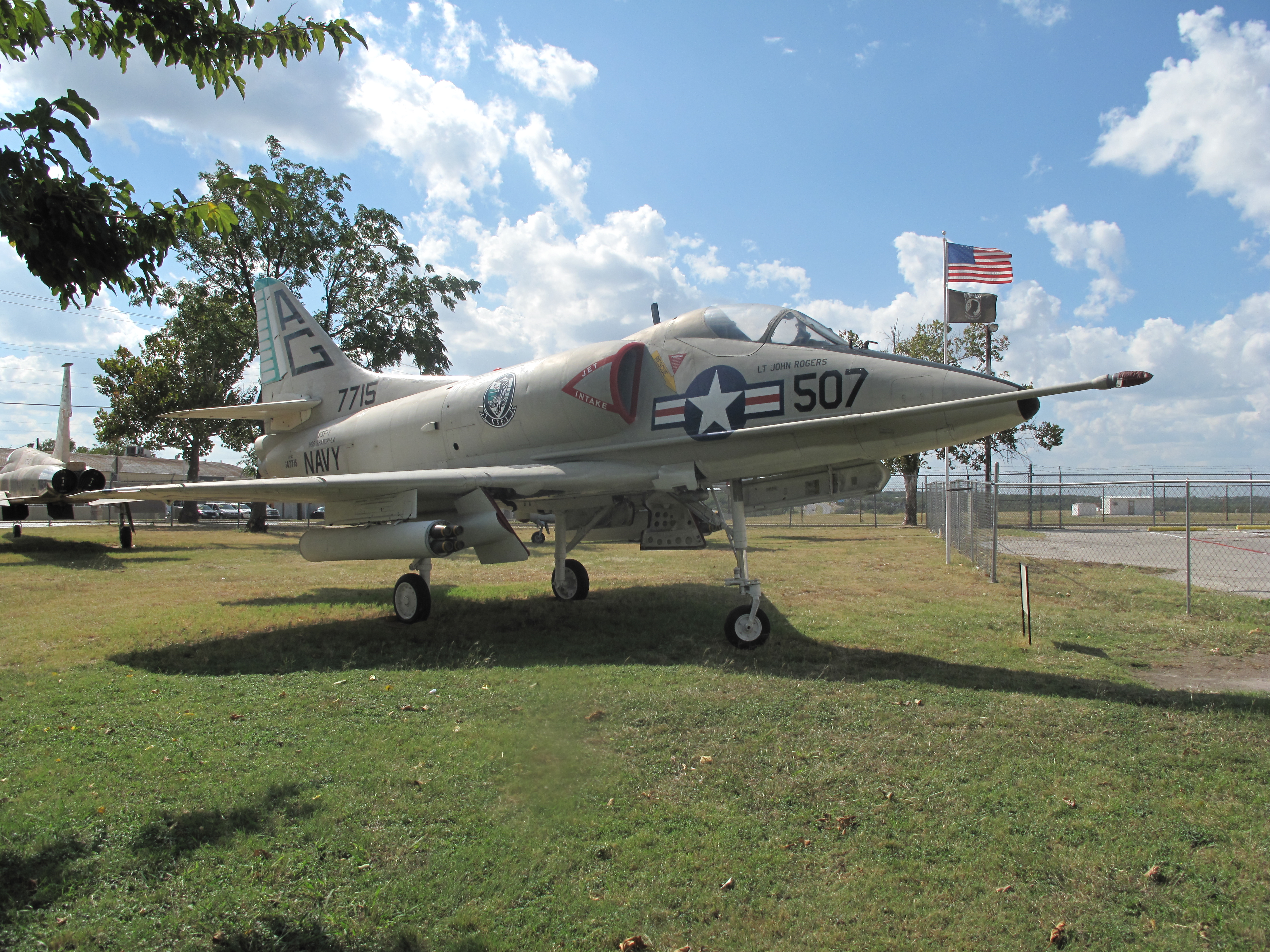 The aircraft joined Attack Squadron EIGHT SEVENTY THREE, VA-873, at NAS Alameda, CA, on 18 May 1968, it returned to VA-125 on August 19, 1968, and then to Fleet Composite Squadron SEVEN, VC-7, at NAS Miramar on April 7, 1969, and stayed until March 1973. It was administratively stricken from the record in NAS Memphis on July 13, 1973. The plane was used for ground training in Memphis and was seen there during 1975. Although it wore Blue Angels colors, it was never a Blue Angels aircraft. In June-July 2007, the plane was disassembled by a small crew from our museum and was moved to Fort Worth. This Skyhawk is on loan from the National Naval Aviation Museum (NNAM).

Locally, A-4s of this type were operated by the US Navy in the Naval Air Reserve Unit at NAS Dallas from 1958 through 1982 for proficiency flying and air combat maneuvering (ACM) training. The A-4M was also operated by the Operations Maintenance Detachment (OMD) in an adversary role based at NAS Dallas, Texas for the Naval Air Reserve. Many of the aviators that flew the four jets were attached to NAS Dallas, including the Commanding Officer of the air station. The aircraft were instrumental in training and development of Air Combat Maneuvers (ACM) for Naval Air Reserve fighter squadrons VF-201 and VF-202 flying the F-4 Phantom II and later the Grumman F-14 Tomcat. The unit also completed several missions involving target towing to NAS Key West, Florida; NAS Kingsville, Texas, and deployments to NAS Miramar, California and NAS Fallon, Nevada for adversary support. The detachment was under the operational command of the Commander Fleet Logistics Support Wing (CFLSW), also based at NAS Dallas.