The Tenth Street Historic District is a historic African-American neighborhood Dallas. It was one of the earliest settlements for African Americans in the city and one of the few such neighborhoods remaining in Dallas. Among the first people to live here were slaves; eventually, the area became a thriving African-American community that was located in a predominantly white neighborhood called Oak Cliff. The district, which was added to the National Register of Historic Places in 1994, features simple bungalow homes with craftsman detailing and non-residential structures that date from the late 19th to early 20th centuries. The Oak Cliff Cemetery is also included in the district. Unfortunately, over time, homes have been torn down and in recent years the pace of demolition has increased (at least 70 of the neighborhood's 260 homes no longer exist). As a result, the National Trust for Historic Preservation included the district as one of the nation's most endangered historic places for 2019.

This historical marker is located in front of the N. W. Harllee Early Childhood Center and provides a historical overview of the neighborhood. 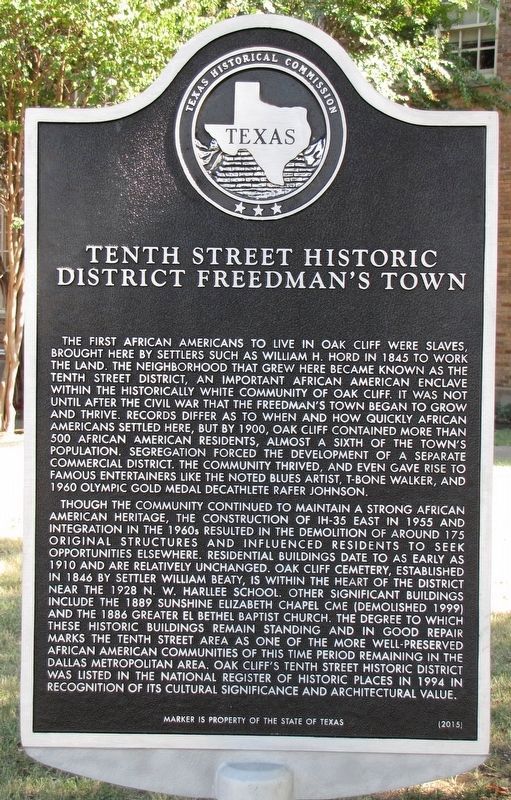 As noted above, the first African Americans to live in what what would become Oak Cliff were slaves. Their owner, William H. Hord established a rural settlement here in 1845. It is likely that after the Civil War some freed slaves moved to the area but it was not fully platted until 1890. Once that occurred, more people settled here including whites. The reason for this, it seems, was that Jim Crow policies were not enforced until the early 1900s.

These policies had the effect of creating a prosperous, largely self-contained middle-class community. The district included a variety of industries and businesses including mills, grocery stores, law offices, pharmacies, night clubs, and stores. Residents found employment in these establishments.

The neighborhood began to decline as the Jim Crow policies were terminated. No longer confined to the area, residents began to shop and do business elsewhere in the city where cheaper services and products could be found. Neighborhood businesses suffered as a result. The construction of I-35 in the 1960s further disrupted the community by separating it from the rest of Oak Cliff. Tenth District continues to struggle today but local residents and organizations such as the Tenth Street Residential Association are striving to preserve the neighborhood and its historical legacy.