The Orpheum Theater was constructed at the northeast corner of Fifth and Edmond streets in 1911. It was demolished in 1958 and now forms a portion of a large parking lot downtown.

The Orpheum Theater located on the right at the corner of Fifth and Edmond Streets. The view is looking west down Edmond Street. Image provided by the St. Joseph Museums, Inc. 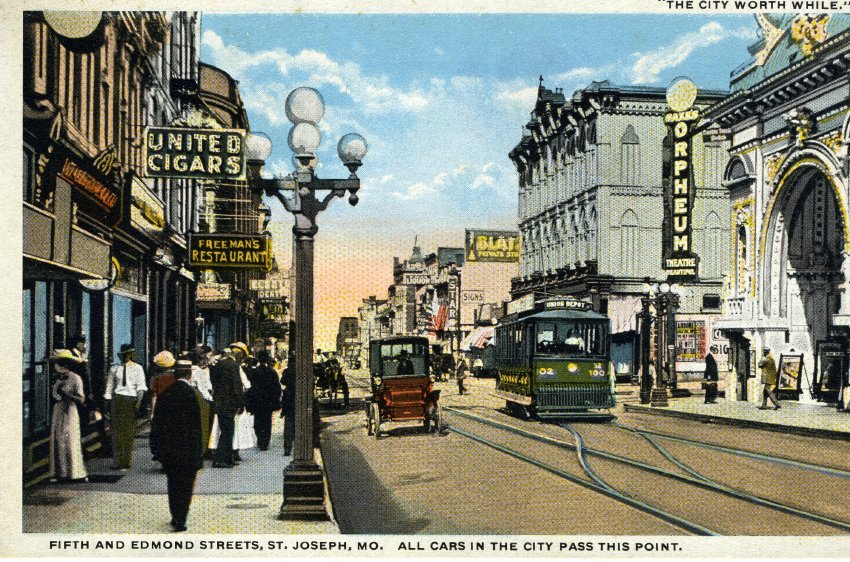 The Orpheum Opera House opened in 1886 in San Fransisco, California. To expand their success, the Orpheum Circut expanded to Los Angeles and later followed the railways to Kansas City, Omaha, and Denver. Expanding across the United States in the early 1900s, the Orpheum Circuit leased out the Tootle Opera House in St. Joseph, MO in 1903. Nearing the end of their ten-year lease, the Orpheum Theater was constructed at the northeast corner of Fifth and Edmond Streets in 1911. In 1927-28, the Orpheum circuit was merged into Radio-Keith-Orpheum, better known as RKO Pictures, Inc. The building was remodeled in 1930 and damaged in a large fire in 1933, but continued to operate until the 1950s. The building was sold to Mechanics Bank in 1958 and demolished to expand their parking lot.