The Ocmulgee site consists of a large and impressive group of mounds located along the fall line of the Ocmulgee River on the northeastern edge of Macon. Although there were many different periods of occupation at what is now Ocmulgee National Monument, the most prominent one began around 800 A.D., in the Early Mississippian period (A.D. 800-1100), and lasted for three centuries. During that time the occupants, who had emigrated from Tennessee or farther west, built many flat-topped earthen mounds, council chambers, and defensive structures in the mile-square town. Archaeologists know that they were immigrants because their pottery was completely different from that of the other people living in central Georgia at that time, but identical to pottery found on sites northwest of present-day Georgia. 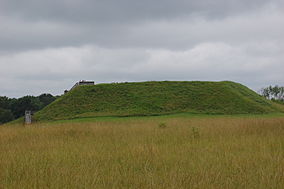 In 1934 the U.S. Congress designated 2,000 acres to be made a national park, but when ultimately signed into law in 1936 by U.S. president Franklin D. Roosevelt as a national monument, only 678 acres fell under federal protection. The site today consists of 702 acres. In 1997 the Old Ocmulgee Fields was designated by the National Register of Historic Places as a Traditional Cultural Property, the first such site so named east of the Mississippi River. The Old Fields site is now endangered, however, because of Georgia Department of Transportation plans to construct a highway that would bisect the site.