The Battle for Atlanta Historical Marker

Dedicated in 2010, this historical marker commemorates the pivotal Battle for Atlanta and is located near the Carter Presidential Library. In the summer of 1864, Union forces commanded by General Sherman surrounded and laid siege to Confederates who held control of the city of Atlanta. Sherman was opposed by Confederate General Johnston who was later replaced by Lt. General Hood as the main commander of Confederate troops in the area. In July, the battle for Atlanta culminated with a Confederate withdrawal with thousands of casualties on each side. After the fighting and capture of the city, Sherman would burn local military assets. The fire spread to the rest of the city, destroying much of it. Sherman would leave Atlanta and begin his "March to the Sea" in the weeks that followed.

The marker for the Battle of Atlanta. 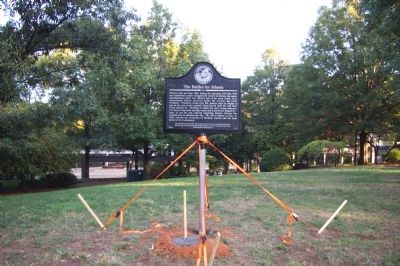 A picture of Atlanta in 1864, just one day before the city surrendered to the Union. 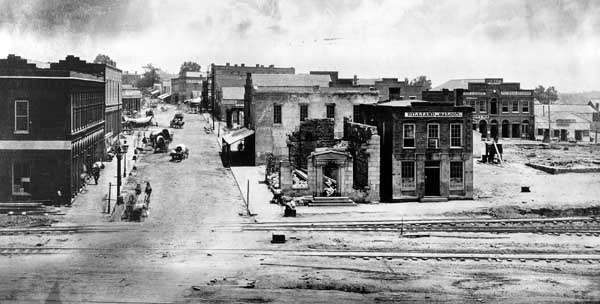 In 1864 Union General William Tecumseh Sherman led his army out of Tennessee on a march towards the city of Atlanta. Confederate General Joseph Johnston opposed Sherman's army. Johnston took a defensive position, only to be outmaneuvered by Sherman's forces and superior supply and support. Johnston would later be replaced by Lt. General John Hood. Hood attempted to lure the Union army into battle for conditions that favored him, but the Union army never took the bait.

In July, Sherman's army had reached Atlanta. Hood had made the decision to stand his ground and fight Sherman. He sent a unit of infantry out in an effort to flank Sherman's army, but it was repelled by Union reserves. The main Confederate assault force managed to break through Union lines but was pushed back with heavy casualties. The Confederates retreated, but still maintained control of the city itself.

Sherman laid siege to the city and began an artillery bombardment of Atlanta but Confederate supplies were cut off by Union troops. In an attempt to fortify the city Confederate forces had used African American slaves to build defensive networks around the city. After their supply lines were cut, the Confederates would retreat from the city in September, bringing an end to the fighting. The Mayor surrendered the city to Sherman after the Confederates fell back. Sherman would use Atlanta as his new headquarters for a time. Before Sherman left Atlanta for his "March to the Sea". he ordered that any military assets in Atlanta that still existed be burned. The fire would spread to the rest of the city, devastating it as a result.

The battle and capture of Atlanta helped to ensure Lincolns re-election in 1864 and was a turning point during the war. Union casualties were around 3,600 men. The Confederates, on the other hand, had casualties close to 8,500 men during the battle. The battle helped to boost Northern Morale and allowed Sherman to continue moving South, it would also be the only major battle in the Atlanta Campaign. Sherman continued South relatively unopposed for the remainder of the war.