Donated to the city of Portland to mark the 150th anniversary of the Oregon Trail, this pioneer statue has engendered spirited debate in recent years as residents question whether its title implies that the acquisition of Native land was sanctioned by divine providence. Similar statues that laud the pioneering spirit of people who moved into and acquired land once controlled by Native tribes have led to similar controversy and debate in recent years, with opponents pointing to the way that the monuments celebrated white settlers who took land that had once been occupied by Native peoples. While many might believe that this interpretation of Western history is recent, the 1992 dedication of this monument was opposed. With some residents questioning the aesthetic value of the monument and others protesting against its uncontextualized depiction of a complicated and often violent and tragic history, civic leaders decided against placing the monument in the North Park blocks. The statue was placed in temporary locations for about two years before finally being installed in Chapman Square. In summer 2020 it was targeted by Black Lives Matter protesters, and was removed by the City of Portland.

The Promised Land in Chapman Square as of 2013. Photo by Cynthia Prescott 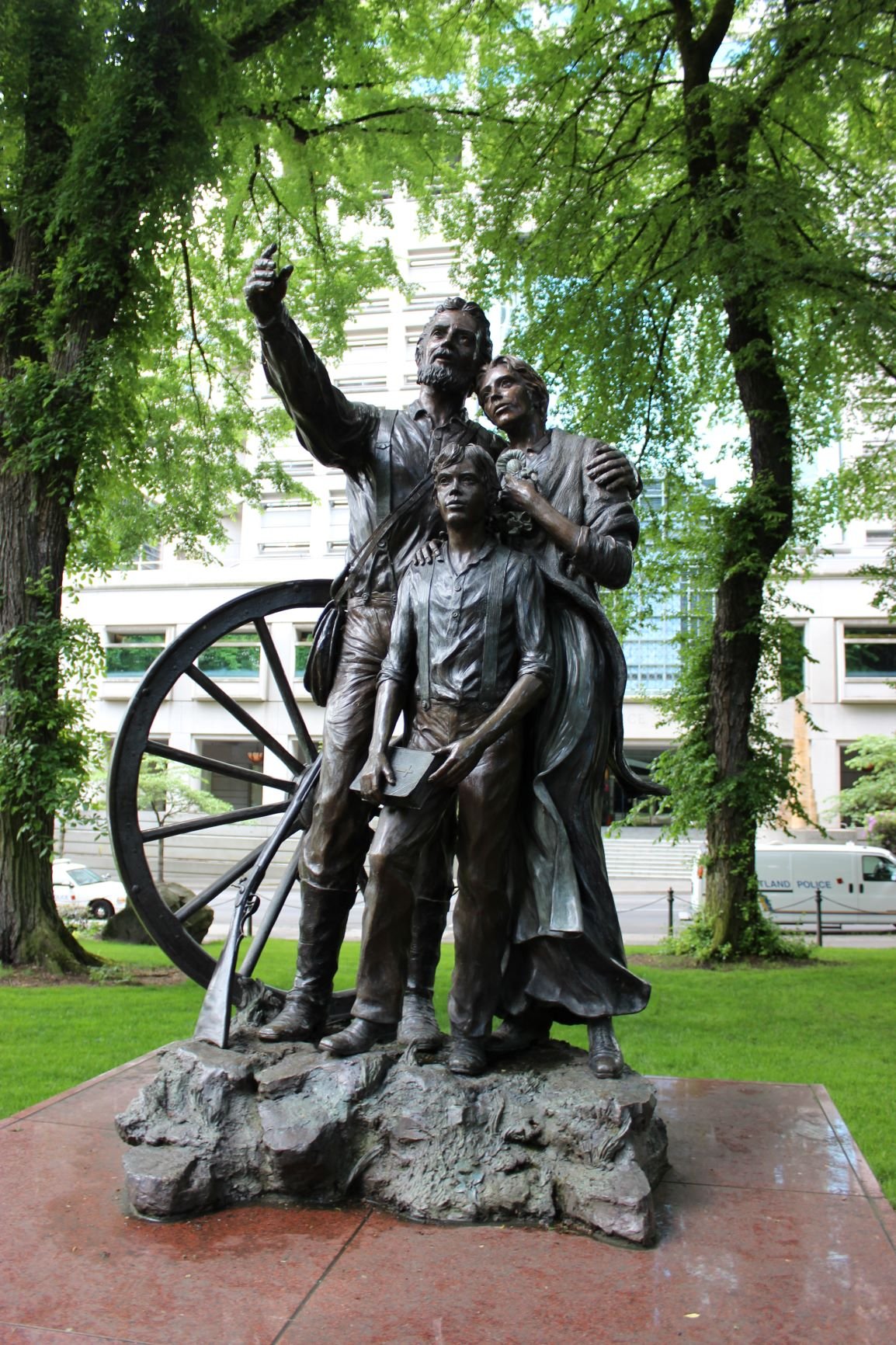 Inscription on base as of 2013. Photo by Cynthia Prescott 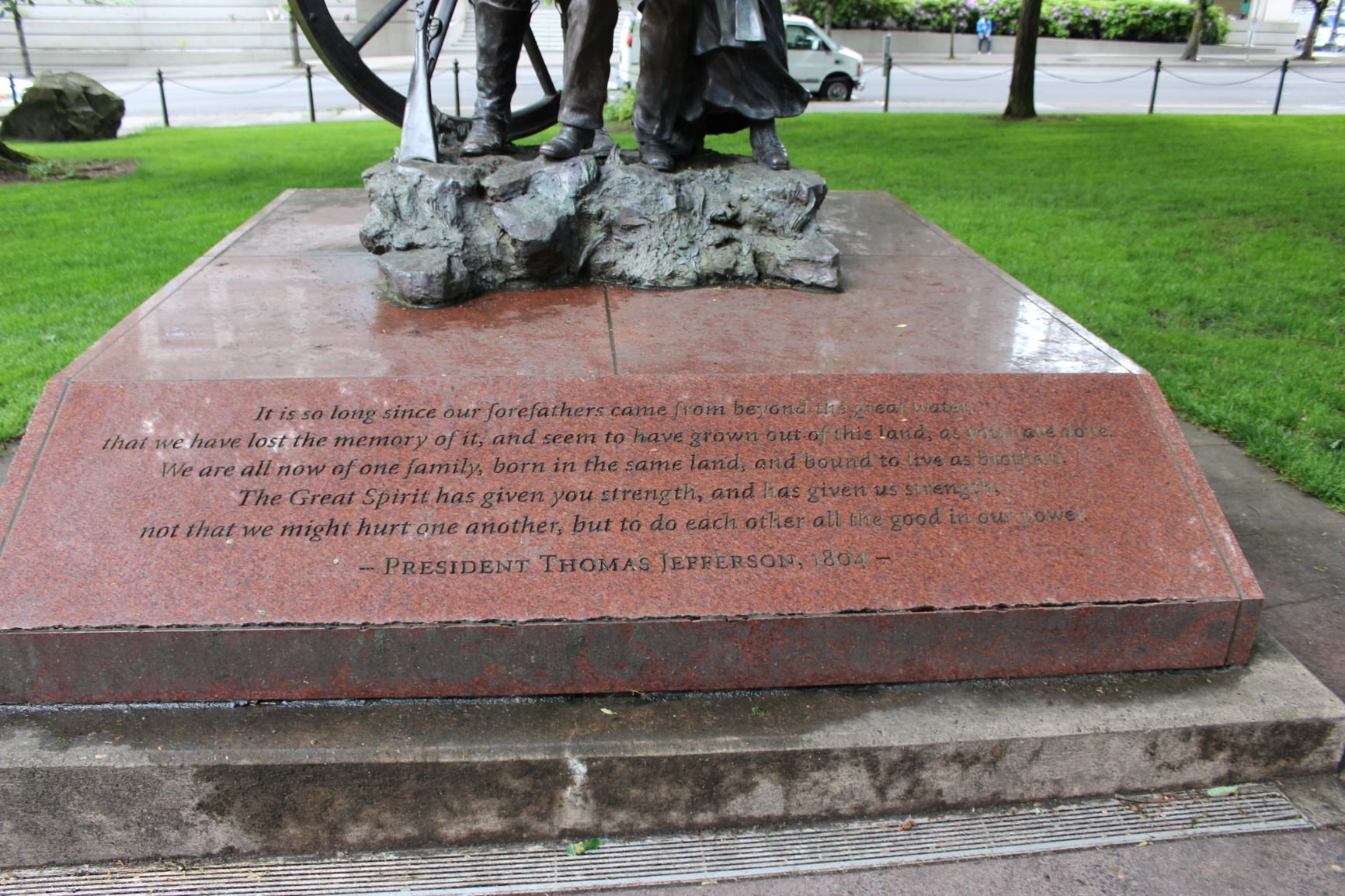 The Oregon Trail Coordinating Council commissioned this statue to mark the 150th anniversary of the Overland Trail in 1992. Some Portlanders objected to the statue, arguing that it glorified white settlers’ seizure of Native lands. Meanwhile, many smaller Pacific Northwest towns declared their desire to prominently display the controversial piece within their communities.

In 1992, the Oregon Trail Coordinating Council (OTCC) commissioned Oregon artist David Manuel to sculpt a $200,000 bronze “memorial to the spirit of the pioneers”1 to commemorate the trail’s sesquicentennial. Manuel’s design utilized imagery common to the dozens of pioneer monuments erected across the United States over the course of the twentieth century. It featured a strong male pioneer guiding his family westward, a nurturing Pioneer Mother, their sturdy young son, a wagon wheel, a rifle, and a Bible. In many ways, it resembled 15 other pioneer family monuments that had been welcomed in communities throughout the American West since World War II. But Manuel’s design quickly sparked controversy in its intended home of Portland, Oregon.

Portlanders could not agree where to place the OTCC’s gift. In March 1993, the statue was placed in a temporary location in front of the Oregon History Center. The statue appeared right at home in front of Richard Haas’ much-respected 1989 mural celebrating the Lewis and Clark Expedition. That mural sought to be inclusive by featuring Lewis, Clark, their African-American slave York, indigenous translator and guide Sacagawea, and her infant son. However, owing to concerns of some residents and staff, the History Center was hesitant to install the piece permanently.

A site committee including representatives of the OTCC, the Oregon History Center, Portland city agencies, and neighborhood association met biweekly for three months. They unanimously approved a proposal to install The Promised Land in one of the downtown Portland’s North Park blocks. Around the statue they planned to display quotes from Oregon Trail diaries and interpretive signs explaining the significance of the Trail to modern visitors.

“the depiction of subject matter was found to be [an] inappropriate and inaccurate portrayal of the settlers of Oregon, excluding the many other races and religions of those who have come to call Oregon home. It is also insensitive to the history of the indigenous peoples of the area.”2

Artists and art historians also challenged the statue’s artistic merit. But most of the controversy focused on the perceived culturally insensitivity of the monument during an era that favored racial diversity. Both scholars and the general public began to question the appropriateness of a statue celebrating white westward expansion.

News of the controversy quickly spread nationwide, with pundits and politicians eagerly weighing in while others hoped to avoid the issue. For example, conservative talk radio host Rush Limbaugh displayed a scale model of The Promised Land on his television show. An Oregonian poll found that Portlanders supported placing the statue in a prominent downtown location by a two to one ratio. Nonetheless, the controversy raged on.

Reflecting the ways that opinions about the monument reflected a partisan divide, residents and city officials from smaller communities in the Pacific Northwest did not share Portlanders’ angst about Manuel’s design. Other Oregon towns that were heavily invested in heritage tourism lauding Oregon's frontier past expressed a desire to display the statue, including Baker City, Medford, and The Dalles. But even in these smaller towns, not all Oregonians embraced Manuel’s statue.

While many Portlanders appeared willing to accept the statue, the controversy about where to place it raged on. A second site committee, which included local community stakeholders as well as historians and members of the PAAC and MAC, ultimately rejected the OTCC’s preferred location in the North Park Blocks as being too prominent and beautiful. They settled instead on Chapman Square as the statue’s final destination.

During construction on that downtown business district site, The Promised Land moved to a second temporary location across the Willamette River in the Lloyd District, where it stood overlooking a light rail stop. The statue’s opponents hoped that, after languishing in the Lloyd District several years, the piece would be forgotten and remain in that less noticeable location. But it was not to be. Ironically, over the next fifteen years both the North Park Blocks and Lloyd District would decline in importance, while the newly renovated Chapman Square flourished along with Portland’s financial district.

Chapman Square has a long history of struggles over inclusivity and popular memory. It was home to anti-Chinese riots in the 1880s. By the 1920s, it was designated for women’s use after working women complained of repeated sexual harassment in Portland’s downtown parks. More recently, the homeless have built protest camps in the square. The statue was installed near a monument to the imperialist Spanish-American War and a massive bronze elk celebrating the conquest of western lands.

Site Committee II sought to make the monument more inclusive by installing bronze footprints and wagon-wheel tracks crossing Chapman Square. They also replaced the OTCC’s planned Oregon Trail diary excerpts with a quote attributed to Thomas Jefferson. But those lines were supposedly spoken to Osage leaders on the eastern Great Plains to justify white expansion into native lands. The committee thus sacrificed historical accuracy in favor of an appearance of mutuality. And they used a text that was in fact dedicated to white conquest to do so.

In the early 21st century, most Portlanders seemed content to simply ignore the once-controversial statue as they go about their own business in Portland’s business district. But in summer 2020, Chapman Square was once more at the center of public protests. Daily protests associated with the Black Lives Matter movement centered on the Justice Center and neighboring federal buildings across the street from Chapman Square. Amid a showdown with federal troops, protesters placed tape over the mouths of the three people depicted in the Promised Land statue, and set off firecrackers at its base. The City of Portland removed the statue to protect it from further damage.