Local historian and longtime public official, Frank Brown (1833-1913), built this brick structure in 1886. Southwestern Telegraph and Telephone Company bought and renovated the building in 1898. The company hired Austin architect A. O. Watson to design the ornate facade that continues to face Congress Avenue. Frank Brown, the public servant who built the original brick building, later went on the write the first major history of Austin. He completed the building at a time when Austin was enjoying a construction boom resulting from the arrival of the railroad. The growth of Austin in these years, along with its central location, helped the city secure its position as the state capital and the home to the University of Texas. 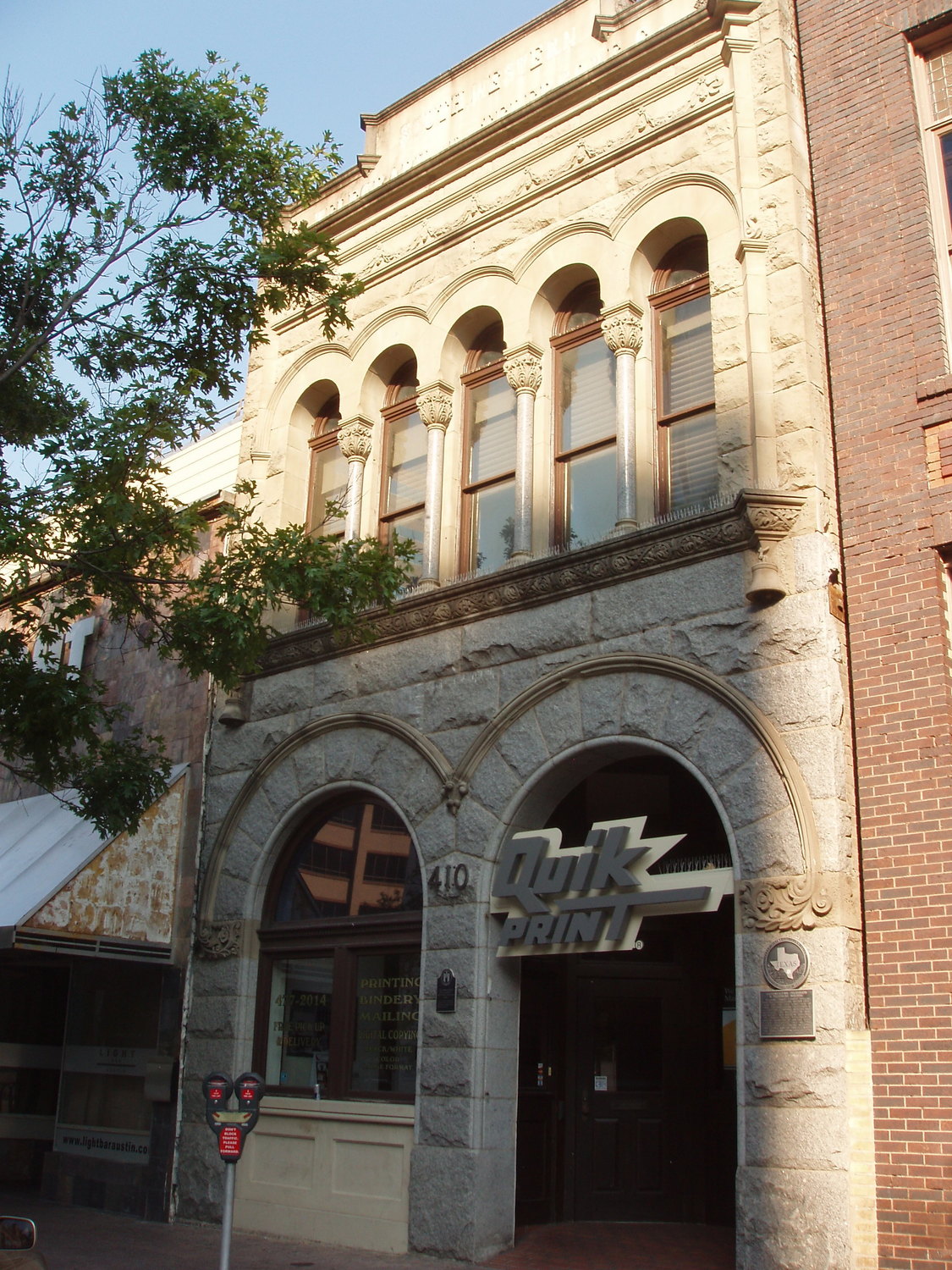 Historical Marker on the Southwest Telegraph and Telephone Company Building via texashistoricalmarkers.weebly.com 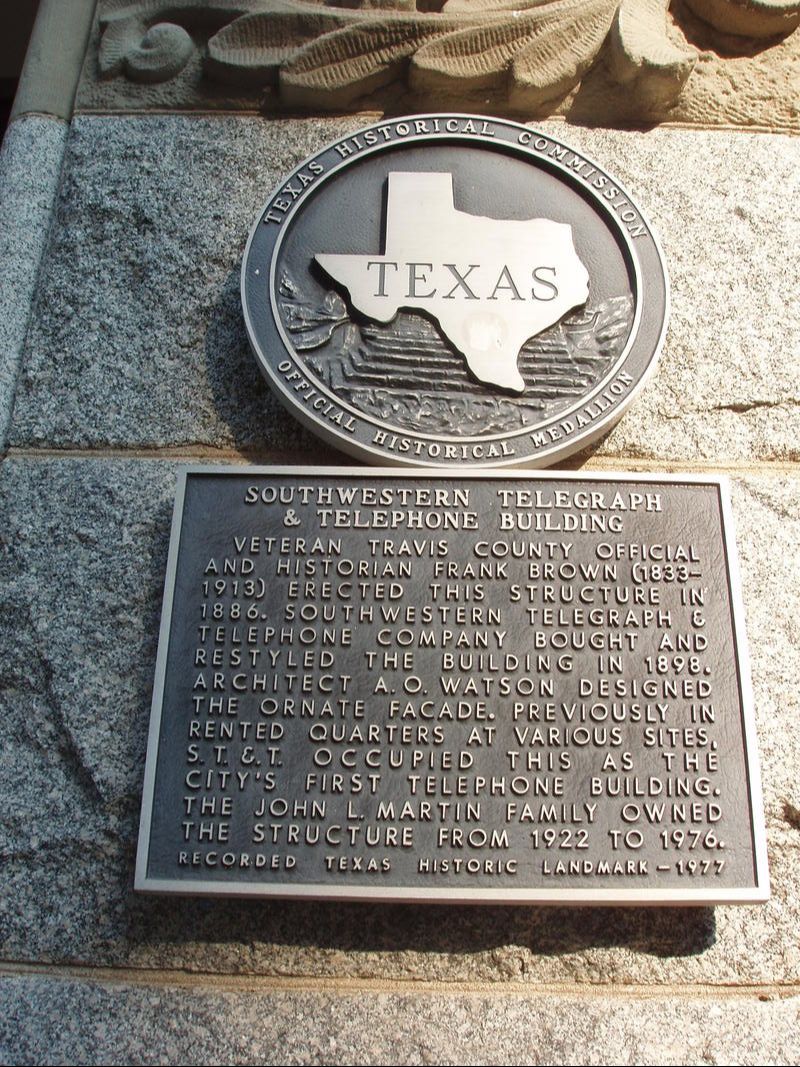 The Southwest Telegraph and Telephone Company Building name can still be seen on the top of the historical building. 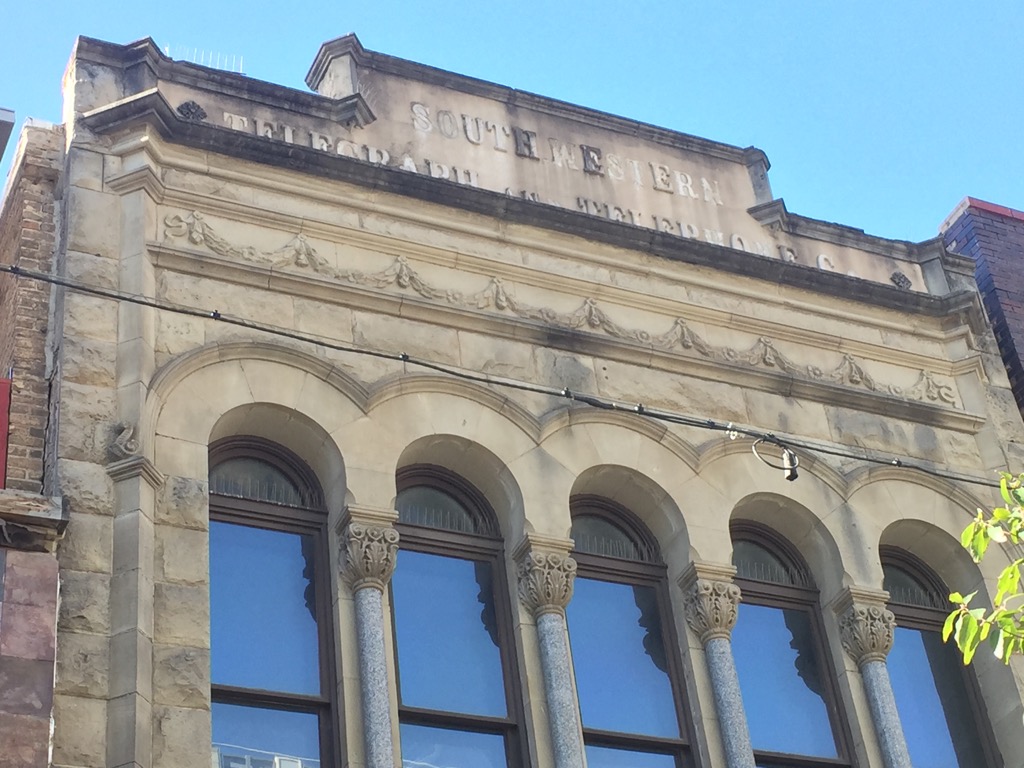 The Southwestern Telegraph and Telephone Building (1886) is significant to Austin because of both its architecture, its location on historic Congress Avenue, and its association with Austin's urban history. The building arose at a time when Austin benefited from the arrival of the railroad, the establishment of the University of Texas in Austin, and the permanent establishment of Austin as the state capital. The building has served many commercial functions, but the building primarily served as the home of the Southwestern Telegraph and Telephone Company.
As part of the 1839 survey and Austin's first official city planning project, designers made Congress Avenue wider than most other streets in the city and intended for high-profile buildings, such as the State Capitol Building, to line the road. The street was the city's first to be paved in brick, and the structures on Congress usually exhibited extraordinary architectural designs with plenty of ornate features.
Frank Brown, who built the original brick building in 1886, was a prominent public servant and local historian. Born in Tennessee in 1833, he moved to Texas with his family in 1835 and then settled in Austin in 1845. Brown held public office for forty years in Travis County as County Clerk and then the Clerk of the District Court. But, he is best remembered for writing The Annals of Travis County and the City of Austin which was published in 1901.
The building emerged at a boom time for Austin. In 1871, the city's first railroad connection arrived -- the Texas Central Railway, making Austin the westernmost railroad terminus in Texas.  Though it proved to be temporary, Austin benefited from functioning as the only railroad town in the region; an economic, population and construction boom occurred during the 1870s.  Gas street lamps, streetcars and an elevated bridge across the Colorado River all appeared during the 1870s. As well, Austin enjoyed two statewide election victories. In 1872, the city secured its position as the state capital, followed by an 1881 election that placed the creation of the University of Texas in Austin; classes began in Austin in 1883. However, by the 1880s as new train lines emerged that often bypassed Austin, ending the city's boom time, but as the state capital and the home to the state university, the city held firm as a significant urban community.
In 1898, the Southwestern Telegraph and Telephone Company acquired from Brown the building for which it is now named. To accommodate its expansive and growing needs, the telephone company renovated the building in 1899. The company hired Austin architect A. O. Watson to design the building.

A. O. Watson practiced architecture in Austin in partnership with Jacob Larmour before starting a private firm in the 1890s. Watson also designed several prominent structures in Austin, including the classic revival addition to the State Hospital, the Austin High School Building, and the Congregational Church. He created the beautiful Romanesque Revival facade that faces Congress, a feature that remains today.

Full Building Picture and Historical Marker are found at https://texashistoricalmarkers.weebly.com/southwestern-telegraph--telephone-building.html.

Picture of Southwestern Telegraph and Telephone name (engraved in the facade) can be found at http://staging.waymarking.com/waymarks/WMMXJ9_Southwestern_Telegraph_and_Telephone_Building_Austin_Texas