Benito Juarez Community Academy was built in 1977 after a long fight by the parents, particularly mothers, of Pilsen who petitioned and protested for a public high school to exist in their own community. In 1979, those same mothers commissioned local artists to create a mural dedicated to the students of Benito Juarez Community. After many proposals from many different artists, "A La Esparanza" created by Jimmy Longoria, Oscar Moya, Macos Raya, Robert Valdez and Salvador Vega was the final outcome of the project. The theme of the mural is the struggle that the latinx community has gone through, both on a national and local level. The title of the piece looks forward and notes to the progress or "the hope" that the new generation represents.

This is a photo from the protests for a new high school built in Pilsen. A signs reads "We need better facilities, we need a high school" which speaks to the fact that the current school didn't have a Spanish language education and in gang territory.

Here is another part of the mural that features a skeletal and flaming red figure intertwined. The skeleton on the right is leading the flaming figure who seems so be forcibly holding a concealed gun. These characters represent gangbangers and the st 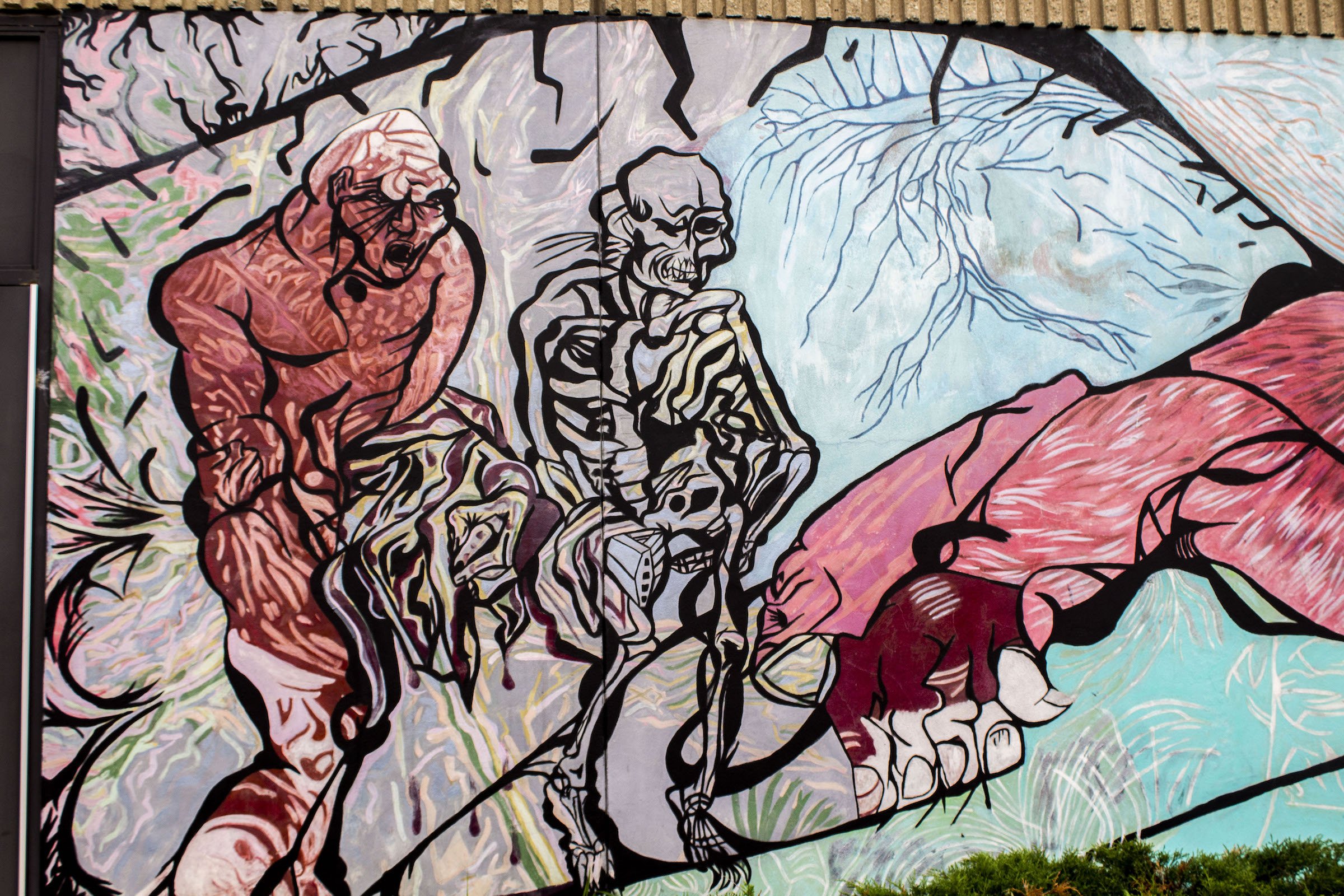 Displayed here is a gangbanger represented by a monstrous form shown shooting an unidentified innocent in the back of the head. The strong take against gang culture spoke to a major problem in the community that affected all of the youth at the time. 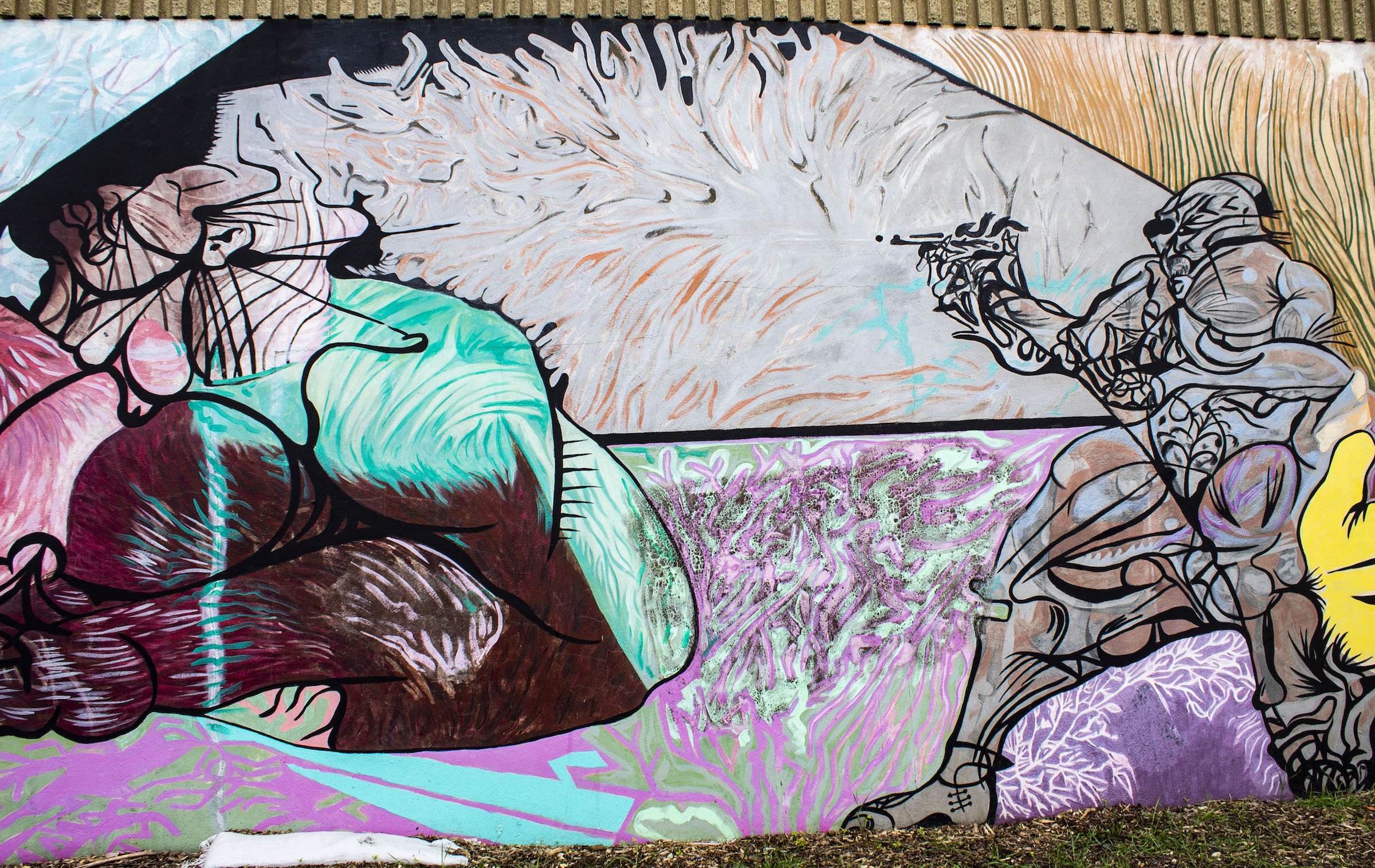 At the beginning of the mural Benito Pablo Juárez García is shown writing on a paper. He is displayed as strong, powerful and successful all attributes the community of Pilsen wanted to instill and inspire its youth with. 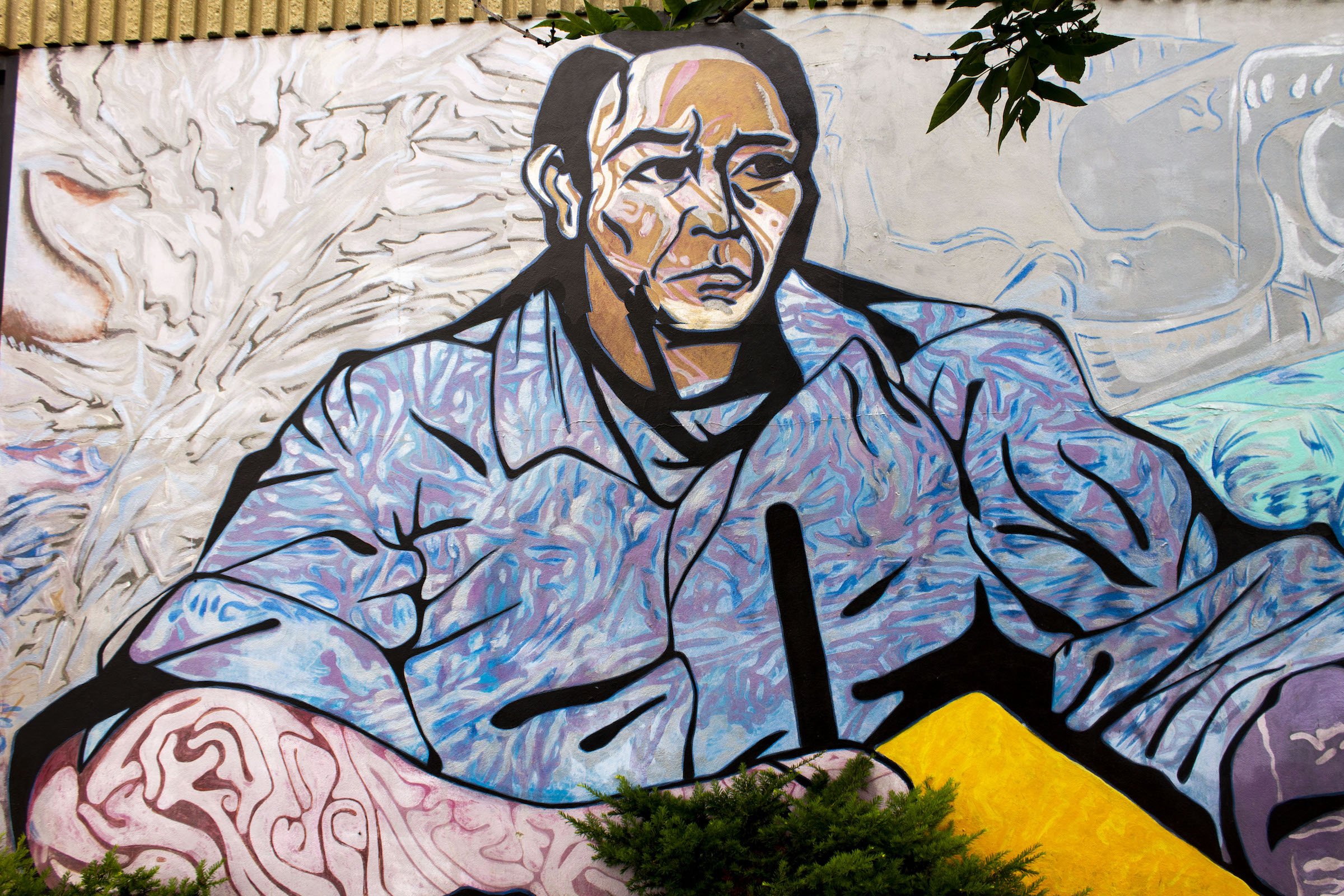 “A La Esperanza” which translates as “To The Hope” is a mural depicting the struggle and aspirations of the latinx community at a national and local level. Completed in 1979, the mural was commissioned by mothers of Pilsen children who fought to create the high school, Benito Juarez Community Academy, of which the mural was painted on. A competition for a professionally commissioned mural was held, and after many proposals the mothers chose five artists: Jimmy Longoria, Oscar Moya, Marcos Raya, Robert Valadez and Salvador Vega. These artists were given the task of commemorate the struggle that went into getting the newly built high school and the community as a whole. However, while they wanted to recognize and celebrate the past, the goal of the piece was not to focus on the past, but to look to the future which the students of Benito Juarez represented.

Pilsen, a neighborhood in Chicago, has been a hub for immigrants since the 1870s. Originally Pilsen was a Bohemian town, but one century later a shift was completed and the area became predominantly Mexican-American. It was during this time that the Pilsen community decided it needed a high school for their children, the dropout rate for students in the area was exceptionally high reaching almost 70% and the students had to cross gang territory to even attend school. Getting a highschool built was no easy task for the Pilsen community. Parents and activists got 2,000 signatures for a petition and also demonstrated on the streets to convince the Chicago School Board to approve funding for a new school to be built. Eventually, after a few years of effort, Benito Juarez Community Academy was built in Pilsen. The school was named after Benito Pablo Juárez García, the 26th president of Mexico, who among other things attempted to organize an educational reform and resist foreign intervention. Many of the leaders were mothers of Pilsen children, and those same mothers two years later re-congregated to hold a competition for a mural that would become “A La Esperanza”.

The mural was to be 2000 square feet and span most of the east side of the highschool. Once the artists were chosen a proposal from the students of Benito Juarez started circulating which demanded for a mural that would be understood by the whole community. Some were upset that Jaime Longoria (now Jimmy Longoria) was part of the project and went so far as to write, “We want a muralist of our community [...] not someone who doesn’t belong here and who doesn’t know what we went through to the school. We don’t want Jaime Longoria because he doesn’t belong here. We would like some changes in our community. We want a history not a mentally high rich ununderstandable mural.” Jaime Longoria, despite the plea against him, ended up being included in a team of other artists who were all part of the Pilsen community.

Murals as an art form have roots in Aztec and Mayan cultures which inspired the Mexican mural movement that was popularized during the Mexican revolution. Murals were used to bring social and political messages into the public sphere of the streets. The tradition of murals was then used as a tool by the Chicano movement during the 1960s and ‘70s in the United States. Pilsen became a hub for traditional style, but it was agreed upon by all involved in creating “A La Esperanza” that the mural they produced needed to have a modern twist since its purpose was to envision a different future than the present held. Marcos Raya, one of the original artists, claims “there was a lot of taco art at this time, they were used to seeing murals painted in a strictly chicano subtle thing, we were creating something new for the new generation.” Many of the murals of the time featured recognizable figures from Mexican of Aztec history, which was partly included in “A La Esperanza”, but the final mural they designed featured less historical figures and gave a direct political message that many around the neighborhood disagreed with. The artists involved were all young (some were even in their teens) and ready to push the boundaries, so the final product was in a more abstract style not seen on walls beforehand. The artists also worked with professors at the Illinois University of Technology who showed that using aluminum oxide would be superior to other white paint that was usually used and created uniquely vibrant colors never witnessed in murals before because.

At the start of the mural on the far left side, Benito Pablo Juárez García is displayed which is a classic traditional muralist move, but rather than being used as a symbol of the past in Mexico, he is shown as youthful and strong to highlight the future of what the students could be in Chicago. Further down the mural are a skeletal and flaming red figure intertwined. The skeleton on the right is leading the flaming figure who seems so be forcibly holding a concealed gun. These characters represent gangbangers and the structure of gangs where the skeletal figure, or brains of gang operations, lead the flaming figure, or passionate youth, into a life of trouble. A few meters later, the mural shows the culmination of a gang education, and a gangbanger is shown shooting an unidentified innocent in the back of the head. The strong take against gang culture spoke to a major problem in the community that affected all of the youth at the time. In fact, in order to paint the mural in the first place, they had to ask permission of local gang members, so that they wouldn’t graffiti over the artwork. Ironically, after the mural was completed it was defaced by anonymous persons who didn’t appreciate the message it spread.

Today Benito Juarez Community Academy boasts a 90% graduation rate which compared to the 70% dropout rate in the 60s proves that the students and community of Pilsen took the message of “A La Esperanza” to heart. It continues to serve as a constant reminder that the students that go through this school are the hope for their community. The mural can still be appreciated by anyone in the area and although it is due for revitalization because it was last repainted in 1994, the mural is nevertheless stunning to witness in person. It is located on the East side of the school across from the soccer field on Laflin St. and can be viewed at any time. It is also included in weekend mural tours provided by Arquitectos Chicago and other companies if one is looking to explore more of the Pilsen mural scene.

Diallo, Amadou. “A School Once Known for Gang Activity Is Now Sending Kids to College.” The Hechinger Report, 30 Mar. 2019, hechingerreport.org/school-known-gang-activity-now-sending-kids-college/.