Tortilleria El Milagro is a monument for the people of Little Village and the history of food and culture in the United States. Founded by Raul Lopez in 1950, the tortilleria produces millions of tortillas every year for people to enjoy with their food. What started out as a small business of Raul selling them locally, has now grown to a large company with multiple locations. At this particular location, one can enjoy buying fresh tortillas or a meal in the Taqueria El Milagro that all connects together to make one large building full of art both inside and outside.

The inside of the Taqueria El Milagro. A Virgen de Guadalupe stands wall to wall in the back. 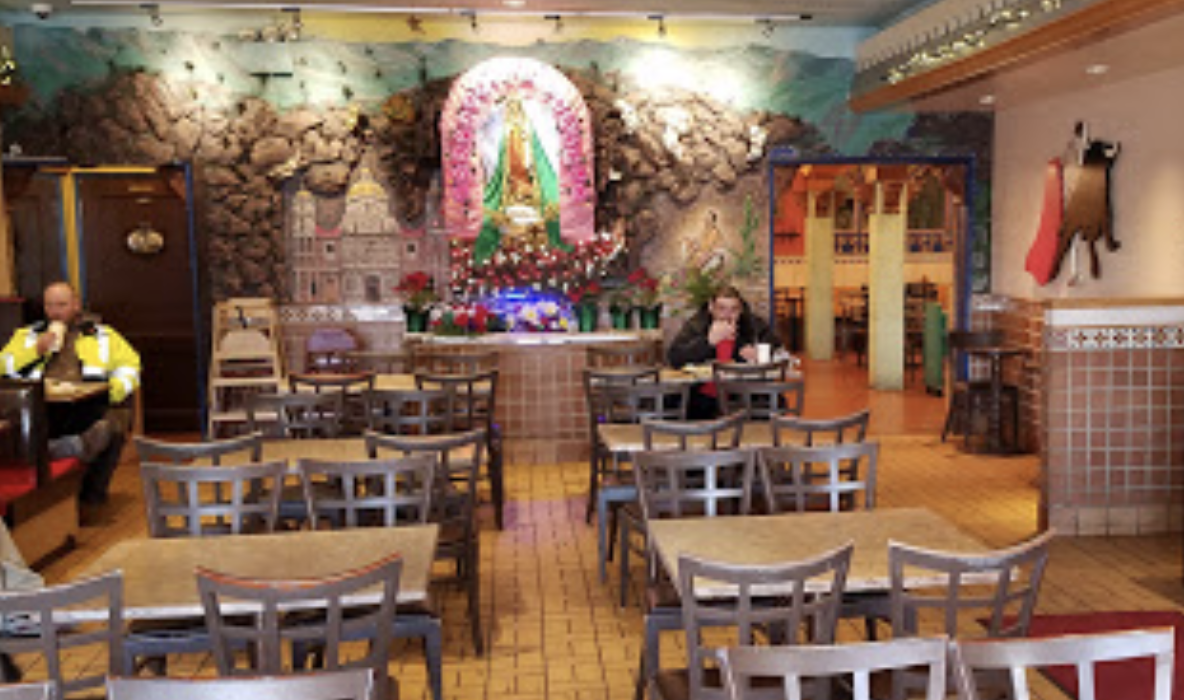 The bright mural art stands out on the side of the building.

The grand building that houses the tortilleria and taqueria. The whole building is El Milagro’s and has parking lots on both sides of the building.

El Milagro truck parked in front of the building. The truck is responsible for delivering tortillas to stores every day. 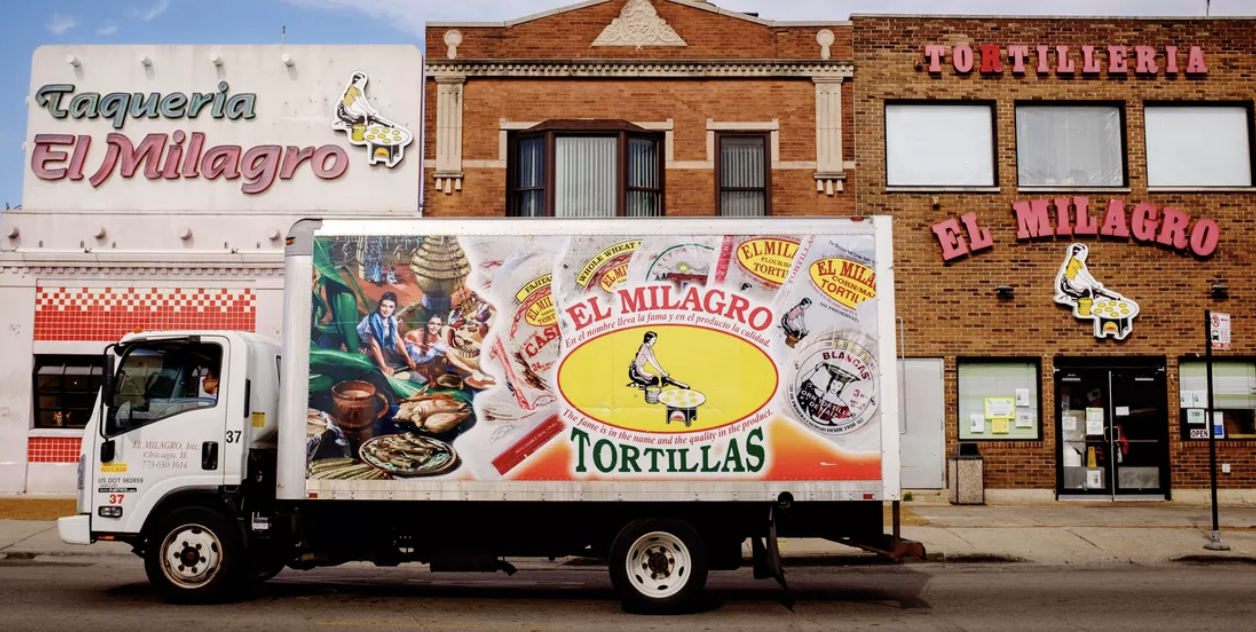 One of the earliest advertisements for the tortillas in 1953. The location is the original building where UIC now stands. 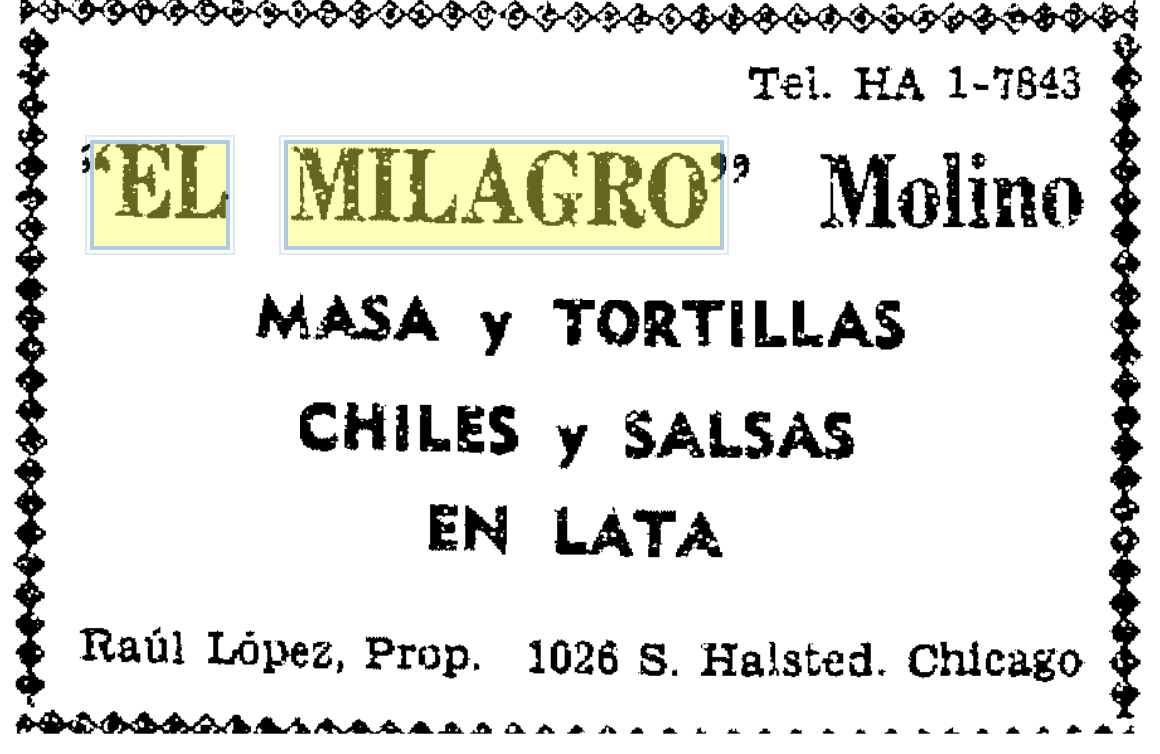 The smell of freshly made tortillas and hard labor take up the Tortilleria El Milagro. Take a few steps out of the tortilleria and enjoy some warm tacos at Taqueria El Milagro. Authenticity takes up the aroma in the room followed by culture and history that you can’t get anywhere else. However, the monument of a tortilleria and taqueria were not built overnight and involved hard work centered around embracing the culture. During the mid-1800s, America saw a rise in the immigrant population in the United States. As Mexicans left their homeland in search of a prosperous future, many settled in large cities and metropolitan areas, like Chicago. Like many immigrants, Raul Lopez sought after financial freedom and knew that globalization could work in his favor by incorporating a business that highlighted Mexican culture and his passions.

The path to a successful business was not paved easy for Raul Lopez as he had to work his way up. When he came to the United States, he worked for the Illinois Central Railroad. Considering that he was coming to America as an immigrant, there were not very many options for people like Raul, so manual labor on the railroads was common. Although he had to work hard on the railroads, that did not stop him from pursuing his passion of making tortillas so he made and sold them on his free time to nearby neighborhoods. Since a young age, he was able to work in a tortilleria and found a passion in that process. He was lucky enough to have the support of his large family which included a devoted wife and their 12 children who worked with him to build the company into the strong, prosperous establishment that it is today. Raul and his family, including his brothers, were able to open multiple tortillerias in Chicago and the pillar of them all stands here at 3048 W 26th St, Chicago, IL and named it ‘El Milagro’ which means “The Miracle.” The name was influenced by Raul’s travels to the US and the miracle of being able to start his own business. The building was built in 1901 and was purchased by the Lopez family business in 1984. After it was purchased, work began to make it into the tortilleria. The original building opened up in 1950 when Lopez went full-time with the business. The building was on Newberry Street and Roosevelt Rd where the University of Illinois at Chicago (UIC) now stands.

Despite troubles to keep the business alive in the 19760s after Raul got divorced and was left with just a taco stand, he was able to come back stronger and open up more locations with one of them being the 26th St tortilleria. The tortilleria, with the help of the other two in Chicago,  now contributes to the production of over 1 million corn and flour tortillas every day and is responsible for delivering to hundreds of stores in the Chicagoland area every day. Over the last couple of decades, there has been an increase in the desire for tortillas which has kept this location very much alive, receiving people every single day of the week. The business has expanded to now having locations in Georgia and Texas.

Located in the Little Village of Chicago right after you pass the monumental arch, the tortilleria serves as a pillar for good entertainment and status of history. Little village has served as a safe space for Latinx people to feel welcomed and express their true culture. Whether it has been opening stores, flea markets, different restaurants, the tortilleria has allowed the people of the community to learn and enjoy a part of the Mexican culture. The tortilleria and taqueria serve a lot of the Mexican community that resides in Little Village, considering that when the tortilleria opened in the 1980s, Latinos represented 47% of the population with Mexicans as the dominant ethnic group. The tortilleria and taqueria were a breath of fresh air when it opened in Little Village as it brought comfort and ease to the Latinx population, as it still does today.

Over the last few decades, tortillas have become a mainstream food that has increased consumption all over the United States, and this tortilleria contributes to that consumption. Tortillas have been paired with many other meals as an added piece of food needed, therefore contributing to their popularity over the years. At El Milagro, the food has been recognized by many critiques in Chicago, even being broadcasted on food channels like ‘Chicago’s Best.’ Now, people from the metropolitan area all come down to Little Village to enjoy the freshly made tortillas and food. Those that can’t make it enjoy the tortillas that this location produces and ships out.

Something that stands out as you approach the tortilleria, you can clearly see the side wall covered with mural art. With bright colors and real people painted on the side, the art tells a story. The painting flows but has different subjects and objects; a big Mexican flag with roses surrounding it catch attention right away, and next to them are images of Mexican men and women who seem to be very happy. Next to them is a little girl who looks out away from the people with a different facial expression. All of the separate images come together to connect with the buildings rich history. Given the history of the company and its establishment within Little Village, the art is meant to represent the close connection that the tortilleria has with culture.

So, whether you’re in the mood for some tasty food or seeing a piece of history, you can find both of these things at Tortilleria El Milagro.