La Villita Park located in Little Village represents the fight for environmental justice in the community. Spearheaded by the Little Village Environmental Justice Organization (LVEJO), the community fought for the cleanup of the area, called the Celotex site beginning in the early 2000s. With support from LVEJO staff and executive director, Kim Wasserman, local politicians like Alderman George Cardenas, and passionate community members, they won contaminate testing, a cleanup of the area, and finally the construction of La Villita Park in 2014. The Park today represents the energetic community mobilization that characterizes the Little Village neighborhood.

This image shows the state of the Celotex site prior to cleanup. Plastered with private property signs, the chain link fence kept out the community and its public interests. Its reclamation created a space taken by the community for the community. 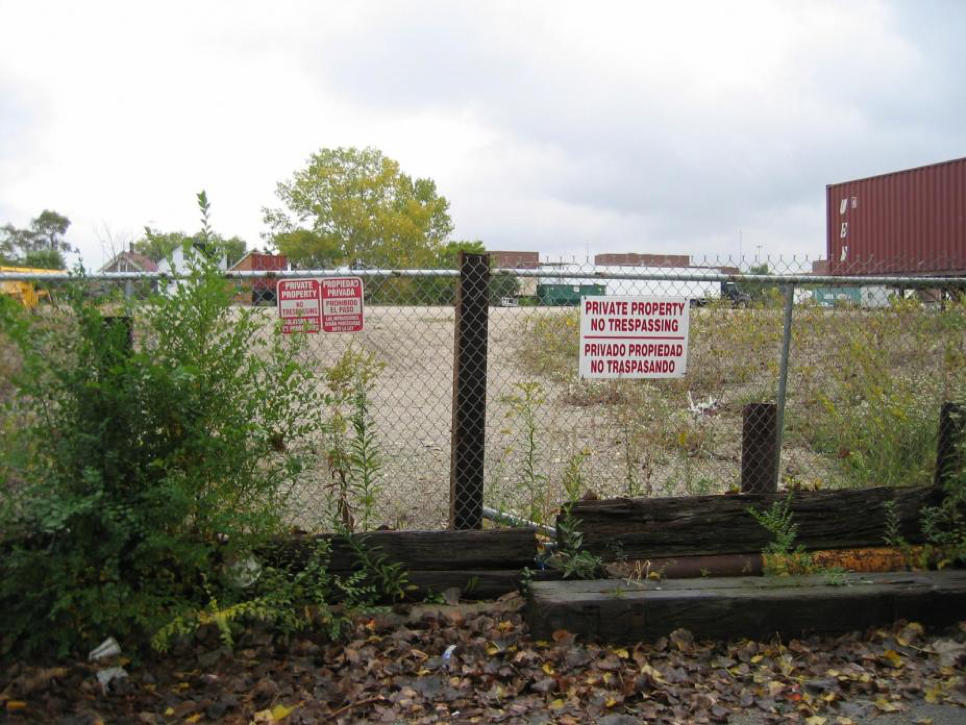 While the white sheet could have been a flag of surrender, it was marred with green paint, the color of hope. Activists hung this sign as a part of the fight for the realization of this hope: that there would be a park to call "ours." 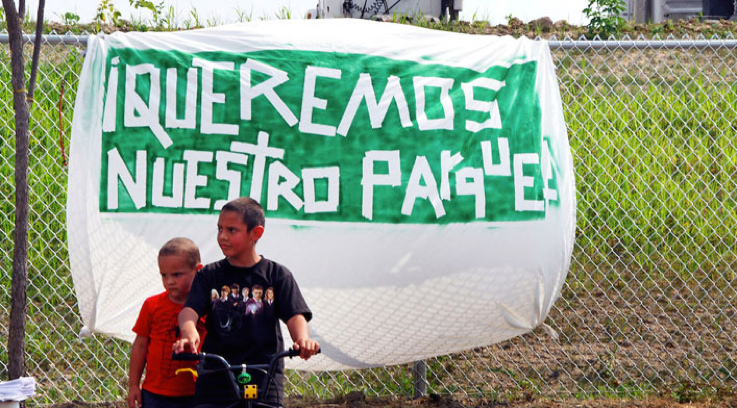 This diagram is a map of the plans for La Villita Park. It includes fields for healthy competition in sports as well as sitting areas for families and a playground. Such a comprehensive design shows the real need for basic green spaces. 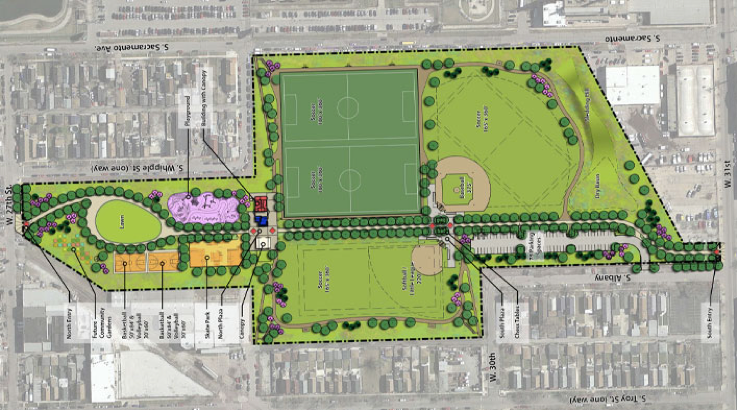 The photo taken at the ribbon cutting for La Villita Park shows the community adults and the politicians that fought for it for their benefit as well as the benefit of the children crowded into the scene ready to play. 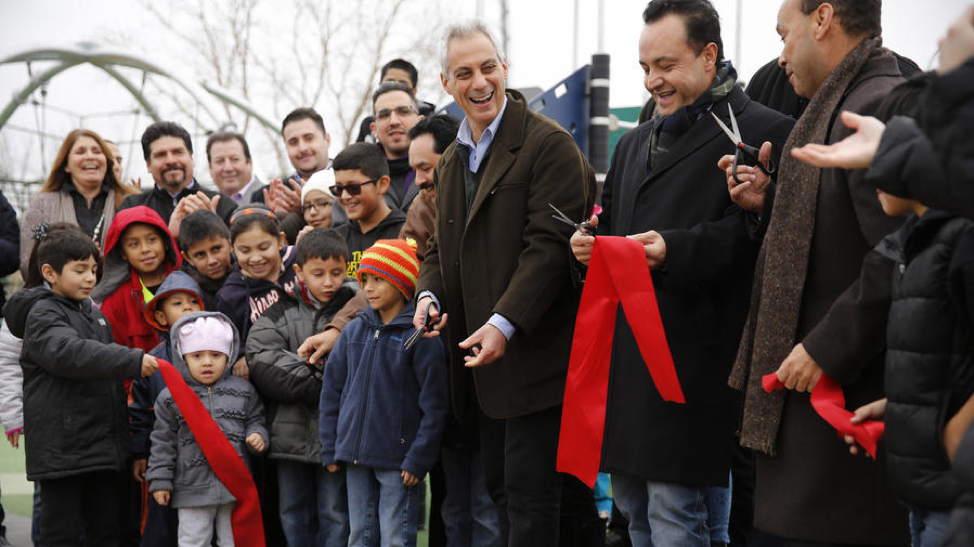 This photo taken on opening day shows that the park forms relationships between children, parents, and whole families. The park provides the opportunity for community building as if giving back to the community that created it.

“We’re a kick ass neighborhood” exclaimed Kim Wasserman, executive director of the Little Village Environmental Justice Organization (LVEJO)(WGN). LVEJO’s founding was a direct response to health concerns relating to the environmental conditions in the area. After a decade long fight, LVEJO opened La Villita Park in 2014 to replace the waste dump site, Celotex. The opening of this park represented the success of the fight for environmental justice in the Little Village neighborhood. The success was driven by large-scale community mobilization that highlighted the injustices plaguing the community and the necessity of the fight for the basic rights of the Little Village residents.

Before La Villita Park could even be considered a possible reality, the community had to begin with the fight for the cleanup of dangerous contaminants on the Celotex industrial site. In the early 2000s, the Chicago sanitation canal and the Cook County Jail projects began to dump their waste into the Celotex site that included toxic waste causing rashes in residents living near it (LVEJO YouTube). The community decided to take on these projects, but faced a difficult and common question: “how can a local organization take on a major multinational power” (Córdova, 38)? They met with the EPA and organized local high school students (LVEJO YouTube). They even staged a protest at the EPA headquarters demanding stricter toxic waste standards at the site (WBEZ). With this they found support from local government against the federal governmental institution as Alderman George Cardenas joined the protest on November 14, 2006 (WBEZ). As a group, they tirelessly pressured the organization, Honeywell, into testing contamination in homes around the Celotex site, finally winning not only the tests but total a cleanup as well (LVEJO YouTube). To take down these huge private companies, LVEJO partnered with residents and politicians, pitting the public and those fighting for public good against a privatized aggressor.

The very nature of Little Village being primarily Latinx shaped these injustices of environmental racism that they had to fight. The neighborhood is predominately Mexican and Mexican American, and its economy is primarily based on the manufacturing industry (Hebert-Beirne et al.). As a community they have the third highest economic hardship score, the second lowest per-capita income, the highest percentage of overcrowded housing, and the highest percentage of adults older than 25 without a high school diploma in Chicago (Hebert-Beirne et al.). The community has faced discrimination and has voiced its reality by saying that “because people believe that because we don’t speak English or because we are undocumented here or because we’re poor that we don’t deserve those basic fundamental rights” (WGN). The environmental justice movement is a direct response to environmental racism. The contamination of the Celotex site, the lack of green space for the populous neighborhood, the leeching of contaminates into homes all directly show this environmental racism at work.

After the victory of the cleanup, activists faced yet another battle against an illegal trucking company occupying the site and turned again to the community itself as well as support from strong governmental institutions. The idea for La Villita Park began in tandem with the cleanup project. As a result, they city and the Park District of Chicago took real interest in the site. The city wanted to buy the Celotex property and turn it over to the Park District (Slosar). However, one very obvious obstacle stood in their way: the never-ending line of shipping trucks parked right on top of it. There were rumors that the trucking business was engaging in illegal practices, but proof was needed. Activists associated with LVEJO staged a stakeout of the Celotex site to catch on film the swarms of trucks entering and exiting the lot around four in the morning (LVEJO YouTube). With this proof, the city fined the owner of the business, Joanne Urso and her company called Sacramento Corp (Slosar). Negotiations between Urso and the city over price ensued and proceeded to cause huge delays in the movement to build the park (Slosar). Recognizing the danger associated with this, activists “staged a rally to call attention to the stalled talks” (Slosar). The rally worked and was given strength through government support as “the city and the Park Districts each [had] pledged $4 million for the project and the state $8 million” (Slosar). Through interests of the government and the necessary push from citizen activists, Urso was defeated and plans for the park soon got underway.

Support for the project gained momentum because access to resources in order to break cycles of poverty and oppression was at stake. To put it simply: “LVEJO is proud to have helped turn this site into an ecological public park that will continue contributing to the health and wellbeing of the community for generations” (Lawndale News). La Villita Park was long overdue. Activists continued to fight even after the cleanup and the bust of the trucking business because the park, they knew, would “address the great need for open space in the community” (LVEJO). It also indirectly addressed another community health concern: crime. Because the park was a community driven project, “formerly incarcerated young residents from Little Village help keep an eye on La Villita, discouraging gangs from moving in. ‘The community feels ownership of the place’” (NYT). Access to a healthy, livable, and safe environment rode on the back of La Villita Park, driving the high level of community and governmental involvement.

With the high stakes and community support, the activism that came from within Little Village found popularity and repeated success. The atmosphere surrounding the activism was simultaneously realistic and positive. “Here everybody goes all out… Yes, we do have issues in our neighborhood, but we do have people fighting for it, right? (Hebert-Beirne et al.). The drive to fight for basic rights is attributed by some to personal history, “We come from a long line of social justice workers wherever we come from in Latin America” (WGN). Whatever the reason, the energized activism in the community works. LVEJO has found support not only from community members, but also from local government. As a result, it has closed down two power plants, created La Villita Park, and won back a bus route that connects the community to much needed resources (LVEJO). La Villita Park represents the story created by the fight for environmental justice in which for one resident LVEJO, “came and opened my eyes…to let me know that I had rights, and if I had rights then…the people from down the block also had rights” (LVEJO YouTube). La Villita Park stands as a memorial to the energy, success, and empowerment that infused the fight.

La Villita park matters because it began to remedy the community rights violations stemming from marginalization and discrimination. It’s symbolic power increases when the history of community support and mobilization is realized. Community members, activists and government groups worked together tirelessly to fight multimillion-dollar corporations. Because of their drive and the importance of their cause, they won. La Villita Park stands as a symbol not only for this tremendous success, but also for the promising future of Little Village as, ‘“Prior to today, (these kids had) no green space,’ (Mayor) Emanuel said at the (opening) ceremony. ‘Let’s open up this park so these kids can get a great future’” (Baer).

Córdova, Teresa. "Grassroots Mobilization by Chicanas in the Environmental and Economic Justice Movement." Voces: A Journal of Chicana/Latina Studies, vol. 1, no. 1, 31-55. Published 1997. JSTOR.

Little Village Environmental Organization. Reclaiming Green Space. LVEJO. 2014. June 11, 2019. http://www.lvejo.org/our-accomplishments/reclaiming-green-space/. Page for photograph of "Queremos Nuestro Parque" (image 2) and for the map of the plans for the park (image 3).