“BIENVENIDOS A LITTLE VILLAGE.” The Little Village (La Villita) arch was built in 1990 by Mexican-American Vietnam War veterans, Ronald J. Baltierra and David Ramirez, and it was designed by Mexican architect, Adrian Lozano. It is located on 26th Street, west of Albany Avenue, in the South Lawndale community. The arch welcomes you to the Mexican-American neighborhood of La Villita, or the “Mexico in the Midwest.” It is the gateway to the Mexican Magnificent Mile in the Southwest side of Chicago. This landmark is a symbol of Mexican presences in Chicago. 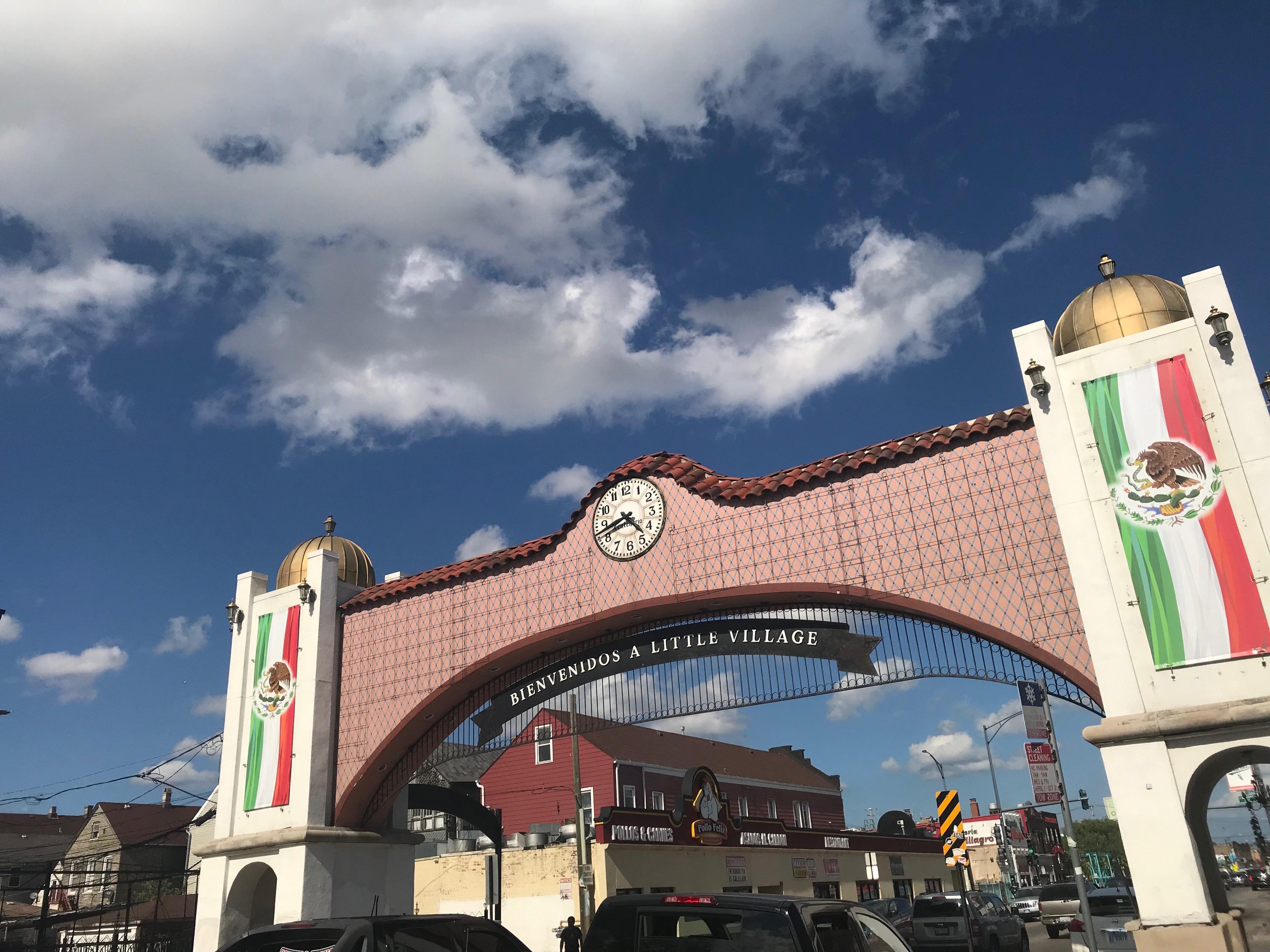 Close up of the Centenario clock and the welcoming banner, "BIENVENIDOS A LITTLE VILLAGE." 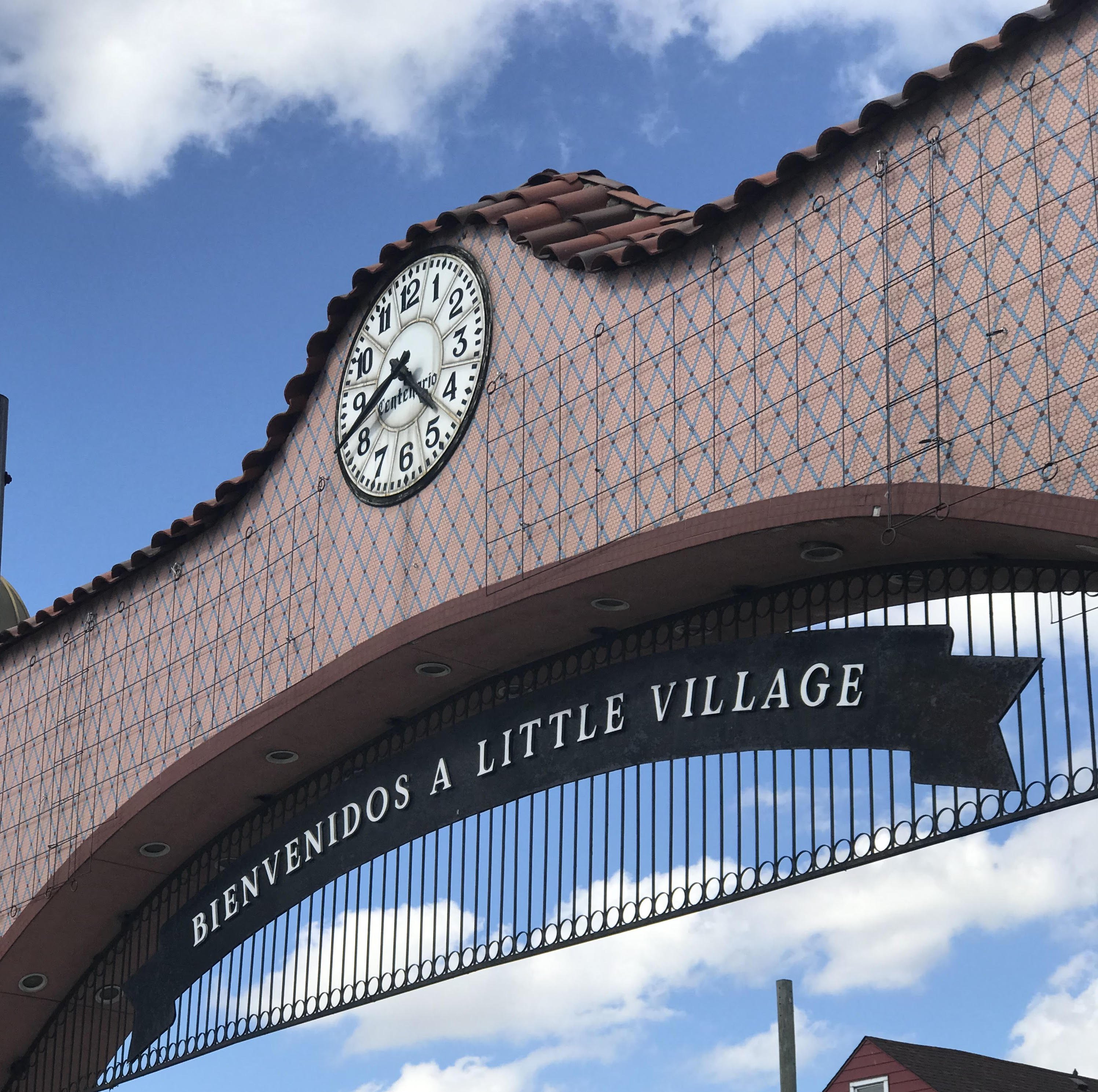 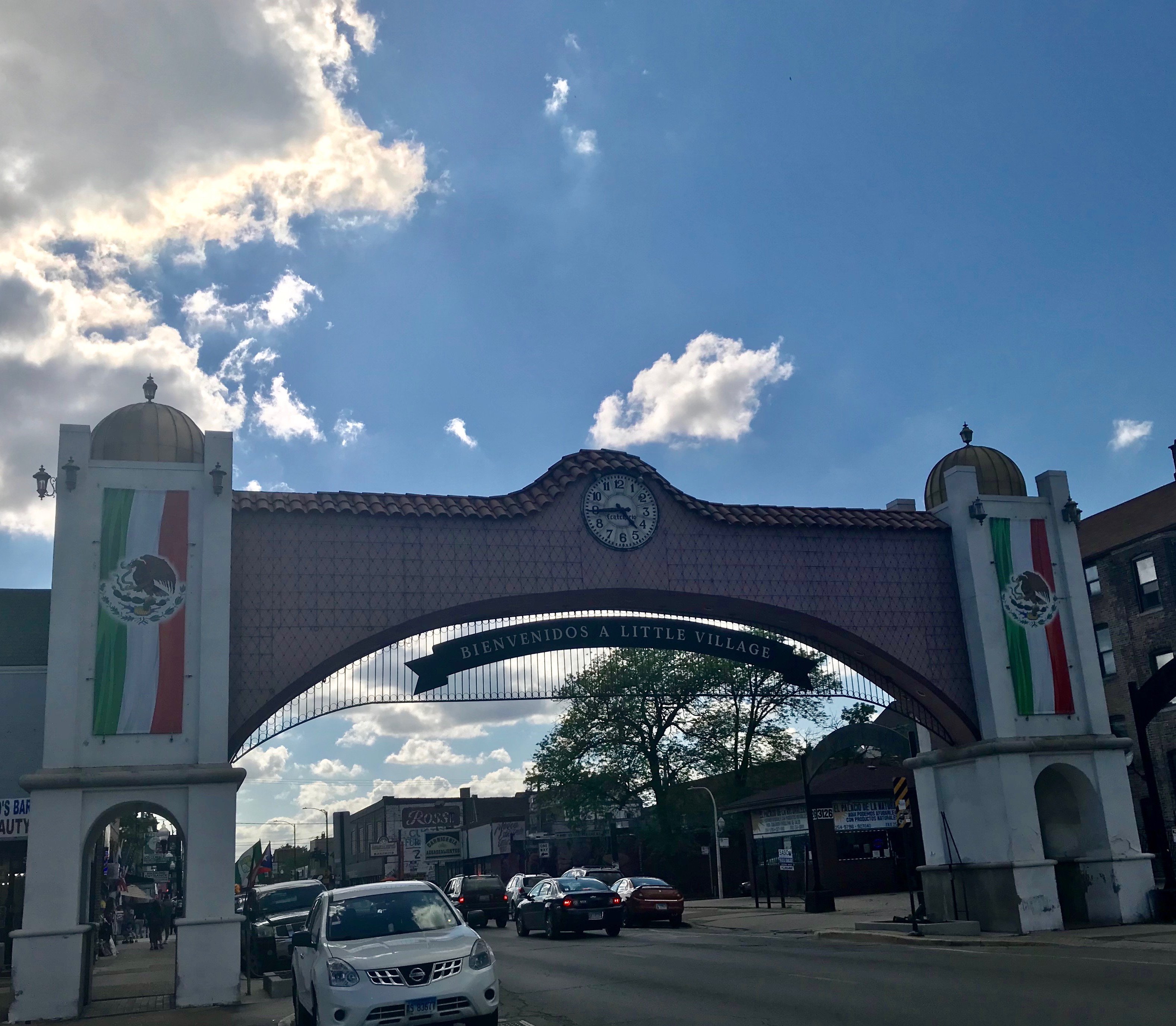 Welcoming people to Mexico in the Midwest. The Little Village arch has become a cultural landmark recognized by Mexicans in the U.S. and Mexico. With its brick design, true to traditional Mexican architecture, it is representative of Mexican presence in Chicago. Over the past decade, the Little Village Chamber of Commerce (LVCC) has made efforts to restore the arch and the Centenario clock that sits on top of it. However, the Mexican community in Little Village has responded. They intend on preserving both pieces as symbols of their heritage and culture.

The arch lies at the heart of Little Village—La Villita in Spanish. La Villita is a neighborhood in the South Lawndale community, characterized by its Mexican population. However, it has not always been this way. During the first half of the 1900s, the neighborhood was predominantly inhabited by European immigrants.1 Mexican immigrants moved into La Villita in the early 1960s, following the construction of the University of Illinois at Chicago campus, which displaced those living in Pilsen.1 Mexicans were not immediately welcomed into Little Village.7 The shift from a predominantly European to a predominantly Mexican community became evident in 1986, when current Illinois Representative, Jesus “Chuy” Garcia was elected Alderman of the 22nd ward. In an effort to bring to light the presence of Mexicans and Mexican-Americans living in the shadows in Chicago, and to welcome the newly arriving Mexican immigrants to the Midwest, Garcia and other members of the community began to brainstorm the iconic monument.7

According to Chuy Garcia, the idea for the arch occurred to him as he paraded down 26th Street after being elected alderman.2 Today, the arch remains a part of the 26th Street Mexican parade in September. The idea of an arch as the iconic marker of 26th Street was inspired by Chinatown’s arch.2 It is supposed to be just as representative of Mexicans as the flags in Humboldt Park are of Puerto Ricans in Chicago.7 The arch was designed by Mexican architect, Adrian Lozano, who also designed the National Museum of Mexican Art.6 The pink adobe monument was intentionally designed to imitate the arches that welcome people to pueblos in Mexico.7 Totaling $275,000 in costs, the arch was built in 1990 by Mexican-American Vietnam War veterans, Ronald J. Baltierra and David Ramirez.6 The construction of the arch, which did not stop traffic running down 26th Street, took six months to complete.6

The Centenario clock on top of the archway was made by Mexico’s Relojes Centenario company, famous for creating monumental clocks for churches and clock towers.7 It was donated by the Mexican government to the Mexican community in Chicago in 1991—a year after the construction was completed.4 It was presented by former Mexican President Carlos Salinas de Gortari.4 Some Mexicans believed that this was the Mexican government's way of recognizing the Mexican community in Chicago; however, others had different feelings about President Salinas’ visit. They believed that the visit was more business and politically driven than culturally driven. They were “disappointed that he [was] not [going to] spend more time talking to Mexican immigrants.”4

La Villita was made by immigrants. The arch is representative of the immigrants' challenges. In recent years, community members have drawn attention to restoring the arch and the clock. Many, including the original builders, have pointed out the negligence of caring for the arch.6 Based on the claim that the arch should be “looked at once a year and maintained every two years,”6 community members have turned to fundraising to cover the costs of saving and restoring the arch and the clock.3  In 2013, news broke about the Little Village Chamber of Commerce (LVCC) wanting to take down and replace the clock.3 This caused opinions regarding the clock to resurface. While some believed the clock is a ‘joke,’ others regarded it as a cultural treasure. Prior to 2013, the clock did not work. According to Elena Duran, a veteran community activist, "The joke was: Of course it doesn't work, it's coming from Mexico."5 However, members of the community disagreed and blamed the chamber for neglecting to care for the arch and the clock.3 When LVCC, introduced the idea of replacing the clock so that it actually works, members of the community turned down his idea.6 They responded by saying that it is a cultural treasure donated by the Mexican government, "from the Mexican pueblo to the Mexican community of Chicago."5 Instead, LVCC funded an engineer from Relojes Centenario to fix the clock. Despite this, it was not long before the clock was no longer working again.7

The Little Village arch and its clock hold cultural and political symbolism in La Villita. They represent a community of immigrants coming out of the shadows and emerging as a powerful force both in Chicago and in Mexico. It a symbol of Mexican culture and heritage in Chicago. Most importantly, it remains a portal for Mexicans and Mexican-Americans to experience Mexico from Chicago. The Little Village arch has become a treasured item to a community that intends on preserving its original design.

Now being a Midwest and Chicago unofficial Mexican landmark "El Arco de la Villita" has passed a preliminary vote to make it Chicago's next landmark. That would make this landmark permanent and would be honoring Chicagoland's Hispanic history.