Our Lady of Guadalupe Catholic Church

This site was the first Hispanic/Latinx church to be founded in the city of Chicago, dating back almost 100 years to the city's first wave of Mexican immigrants working in the city's industrial peripheries. Its construction came at a time when these laborers did not have much to contribute themselves, and yet the church was able to sustain itself and garner significant theological influence through its devotion to the well-regarded Saint Jude. Today it remains an active church and community relic in Chicago's far Southeast side, particularly due to the widespread following of its saint. It operates in conjunction with an adjacent Catholic school that has served the community since 1947, and both have their doors open to all for information and religious services.

The front face of the church, with the initial name of the church featured above the entrance. The church has inhabited the same structure since moving from a small shack in 1928. 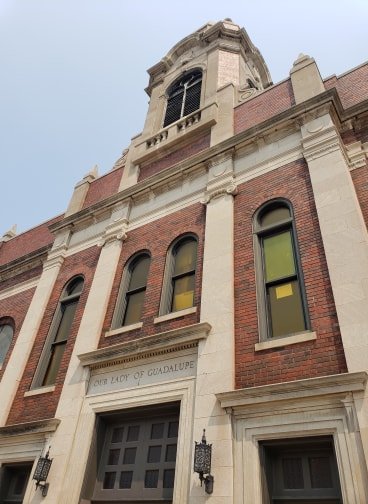 On the left-hand side of the building, a sign indicating the church's historic role as a center of devotion to Saint Jude is prominent. 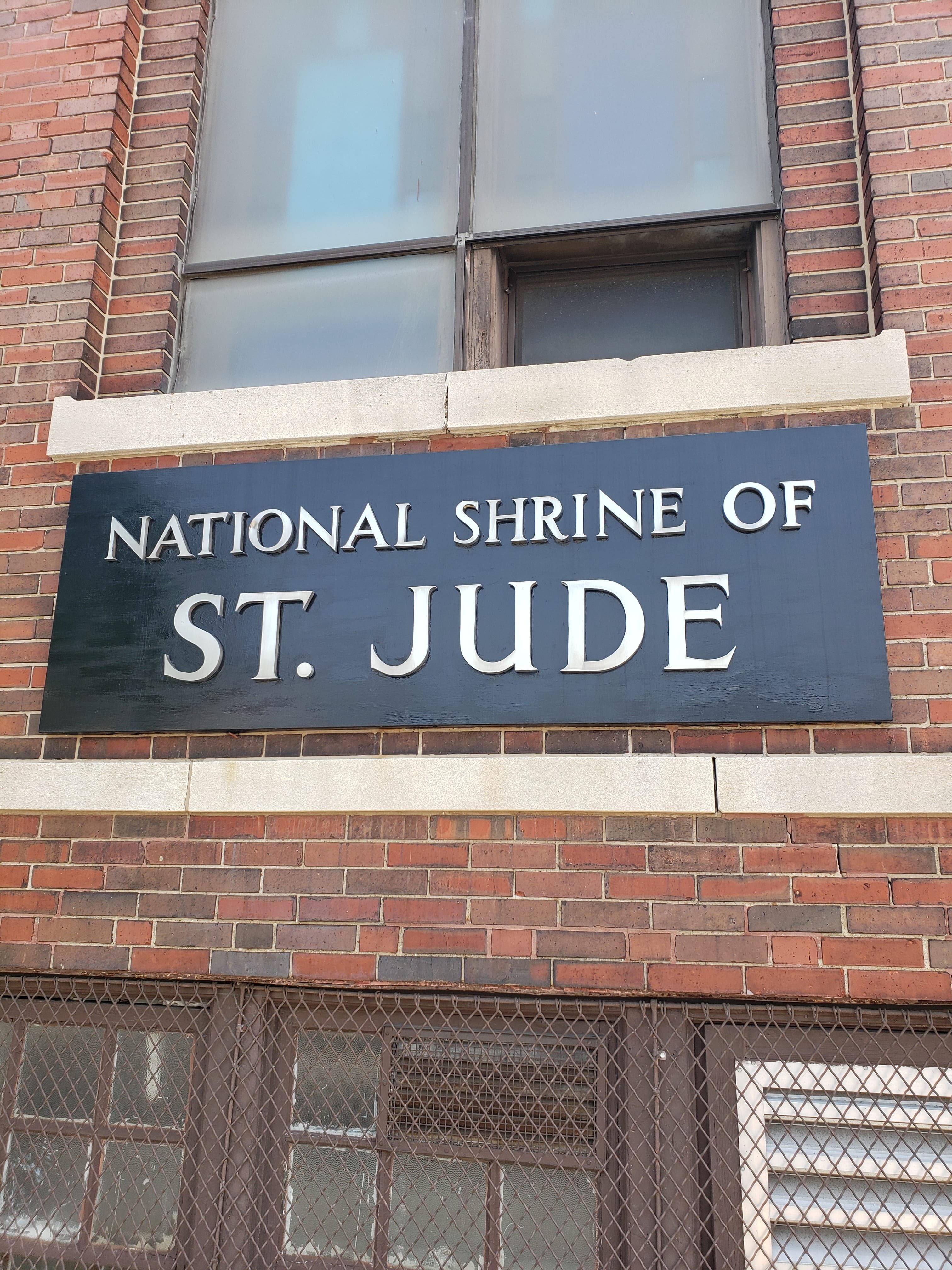 A snippet from a 1933 Chicago Tribune article announcing a novena, or nine day Catholic celebration, in honor of the anniversary of the church's dedication. 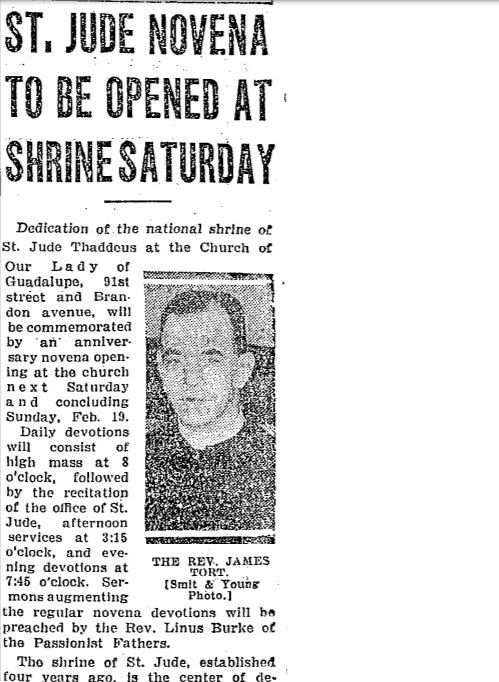 Just one of countless newspaper advertisements for the church, this one from 1981, demonstrating its role in the community in honoring a saint with a particularly loyal following beyond just the local community. 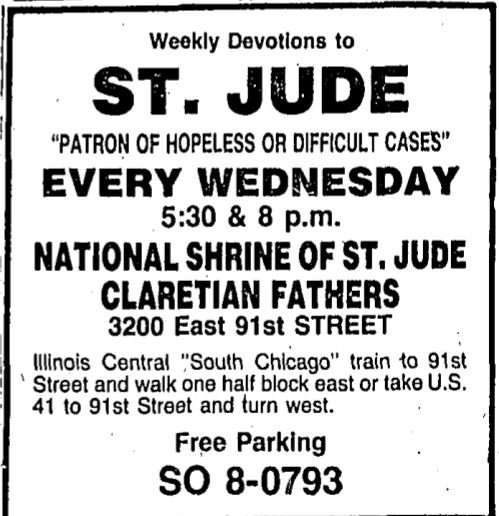 The shrine to Saint Jude itself, a saint thought to be important for addressing particularly trying times and hopeless causes. 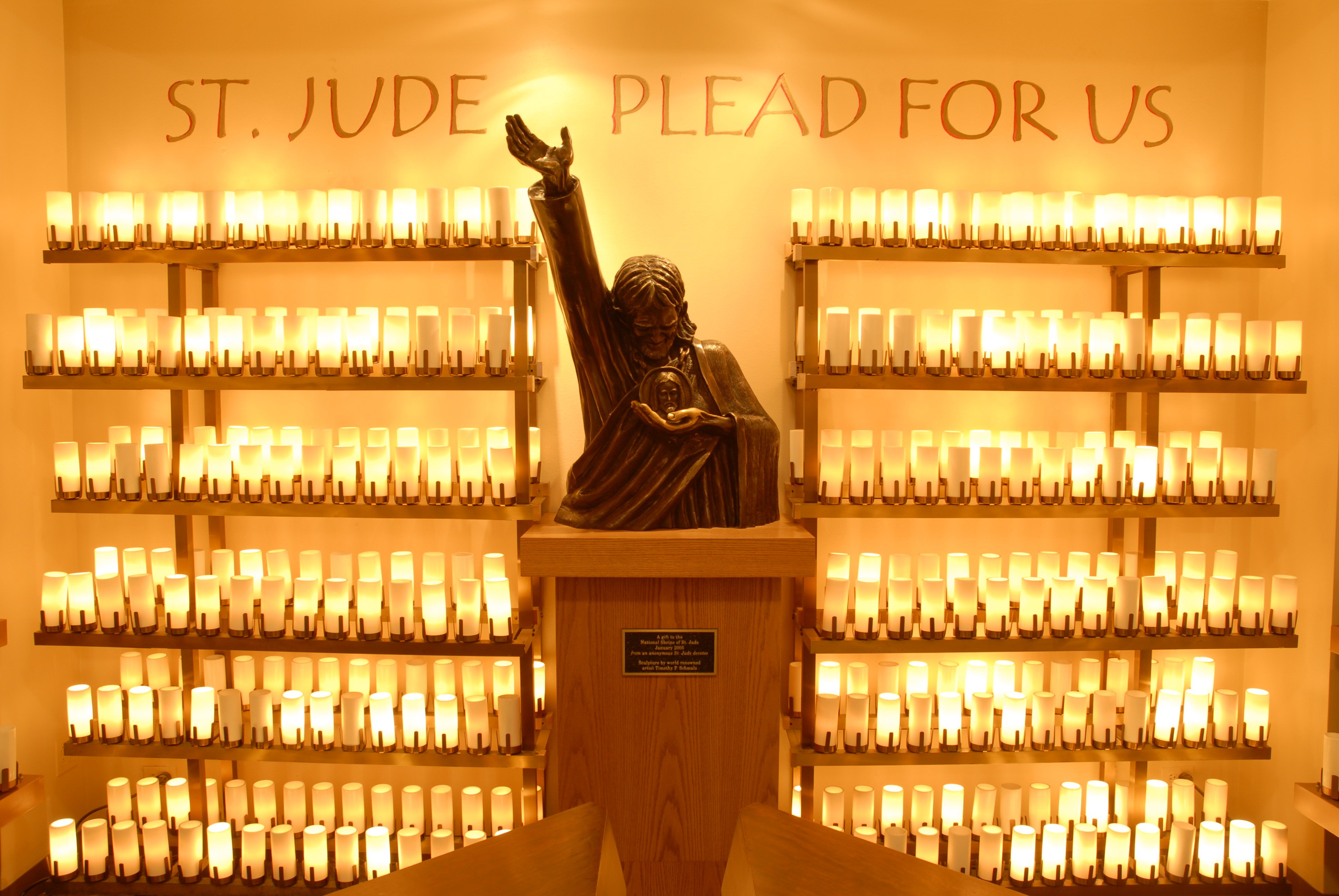 Interior shot of the building. 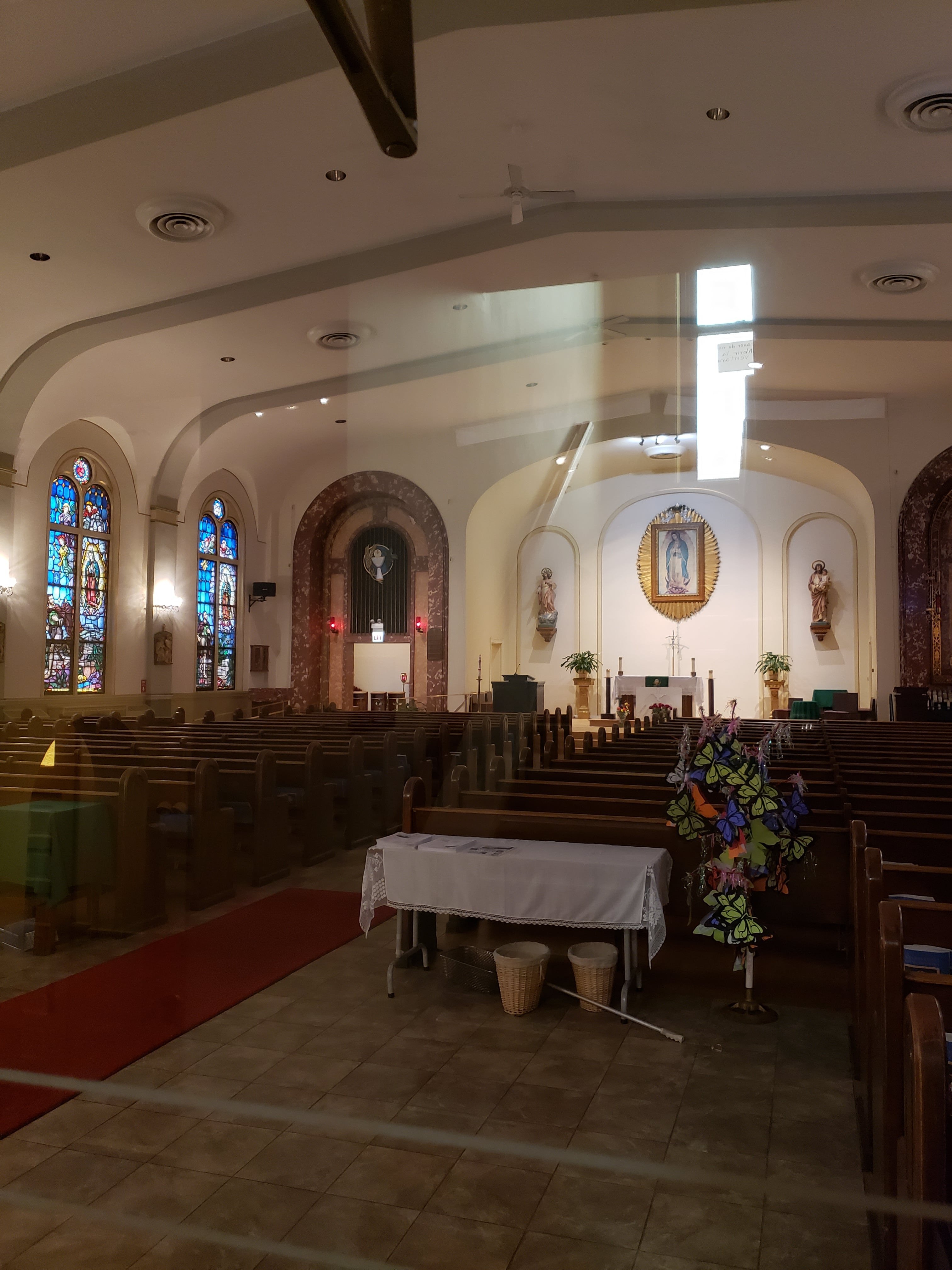 A shop inside of the church selling various devotions and other religious merchandise. This has proven to be a major source of revenue for the church's operations. 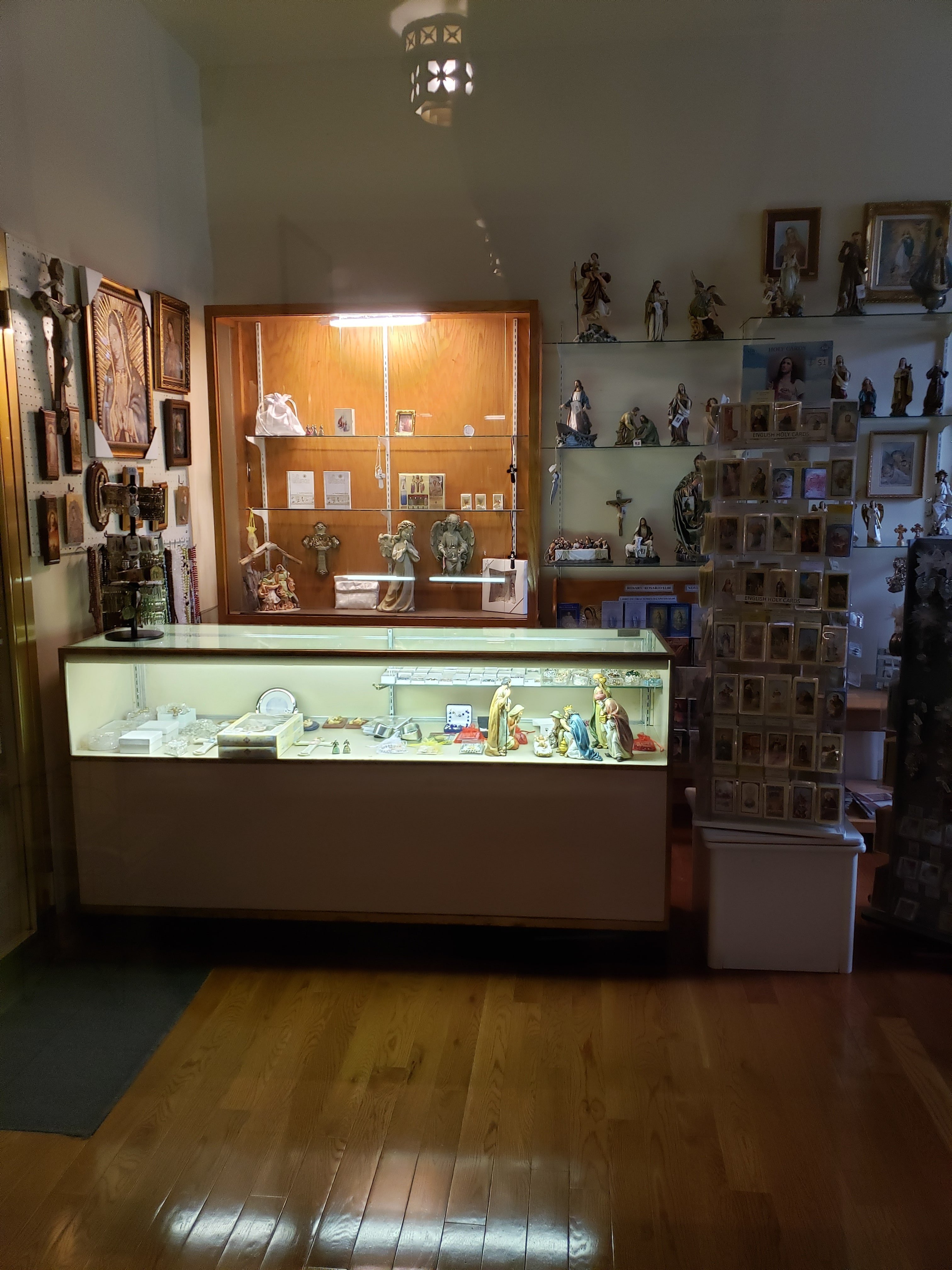 The pre-k through 8th grade Catholic school across from the church's parking lot. 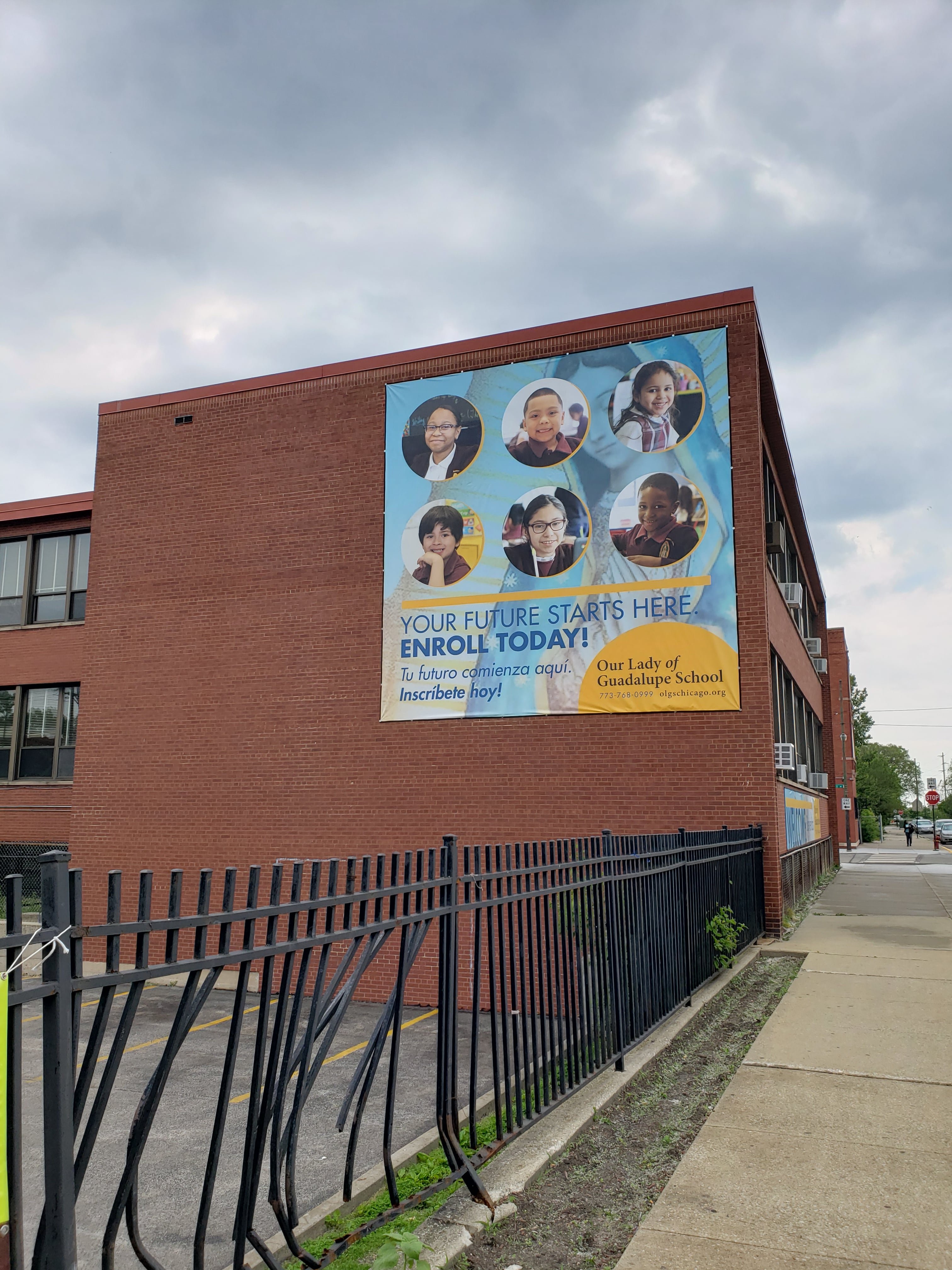 Chicago is not normally the first place that comes to mind in discussions about early Latinx populations in the United States. Unlike border states such as California and New Mexico, Illinois has never been even close to lying within Mexico’s historical borders, making its heavy Mexican presence quite an anomaly. Many of its initial Latinx residents were Mexican migrants hailing from longer-established population groups in border states nearly a full century ago, in pursuit of supposedly lucrative work opportunities. Recruiters operated in both Mexico and the American Southwest, luring Mexicans to work in the steel and rail industries with the largely false promise of improved quality of life over local opportunities (Arredondo). Given that even in the modern era about 70 percent of Hispanic Americans profess to being of the Catholic faith, it is unsurprising that one of the earliest indicators of their community in the city came in the form of a church. These initial populations in Chicago’s Southeast side not far from the Indiana state line were not nearly as large as the city’s Hispanic population today, but their creation of an important Catholic church in the city continues to serve as an important symbol of the untold Latinx impact on Chicago's urban fabric in spite of socioeconomic hardship.

The church was first built in 1924 and started out as a small makeshift structure built from used army barracks in this industrial area of the city. It was known as Our Lady of Guadalupe Church, a reference to a title given to the Virgin Mary. Friar James Tort became the first pastor of the church, and in 1926 work began on a more formal structure for the house of worship. It was replaced and dedicated in 1928, with Friar Tort instilling among the patrons a particular affinity toward Saint Jude (National Shrine of Saint Jude), one of Jesus’ twelve apostles. This devotion additionally served to attract visitors from afar who could assist in keeping the church financially afloat, given that most of the church’s regular attendants did not have much to donate to the church themselves as industrial laborers. The church therefore became the National Shrine of Saint Jude in 1929, and became so burdened with visitors devoted to the saint that plans were once made to move the Shrine out of the city entirely (Orsi), although these never came to fruition.

In 1947, a Catholic school was founded in association with the church, known as Our Lady of Guadalupe Catholic School. It lies on the same block as the church, the church's parking lot separating the two, with both the school and church still operating to this day. The school teaches from preschool to eighth grade levels. Today, the neighborhood around the church is a mix of residential and industrial, and has a high level of integration between Black and Latinx residents relative to much of Chicago, although the church’s patrons continue to primarily be of the Latinx community. The church maintains signs referring to both names that have been given to it: both Our Lady of Guadalupe and the National Shrine of Saint Jude. While not of truly remarkable architectural style, it is still quite prominent in a low-rise community on the city’s edge. It retains a beautiful, spacious interior in which services primarily in Spanish occur regularly. The church continues to sell devotions to Saint Jude from a shop inside of the building, just as it did in order to maintain sufficient revenues in its earlier history.

In a city that now contains near a million Hispanic/Latinx residents in its limits, the particular importance of this church in the wider community is less pronounced today, being just one of over 300 Catholic parishes in Cook and Lake counties (Archdiocese of Chicago). However, it continues to stand out as an important relic to demonstrate that Chicago’s Latinx community is not entirely a recent phenomenon, and that Chicago is fundamentally more than a city of solely its better known white and Black communities. In fact, this church stands out as having served early on as a national level attraction in the city far outside of the glamorous downtown, let alone in a largely Hispanic neighborhood. Even as the city’s focal points of Latinx culture have shifted north and west, this particular church maintains an influential role in the city’s Catholic community as a whole, pooling in patrons from afar due to its important status in honoring Saint Jude. The church thus serves as an important sort of metaphorical anchor in establishing Chicago’s roots as a thriving hub of Mexican community far from their land of origin.

History of the Shrine. The National Shrine of St. Jude. . Accessed June 09, 2019. https://shrineofstjude.org/the-shrine/history-of-the-shrine/.

This entry has been edited 36 times.