J.W. and ruth Baines were the grandparents of Lyndon B Johnson. They moved moved in 1904 after financial losses that led J.W. to sell his house and move to Fredericksburg. After moving into the house J.W. started up his new law office. The couple used cement blocks made by the company Basse Blocks, other materials included “a gabled dormer with paired windows above the entryway, jig sawn fretwork”. 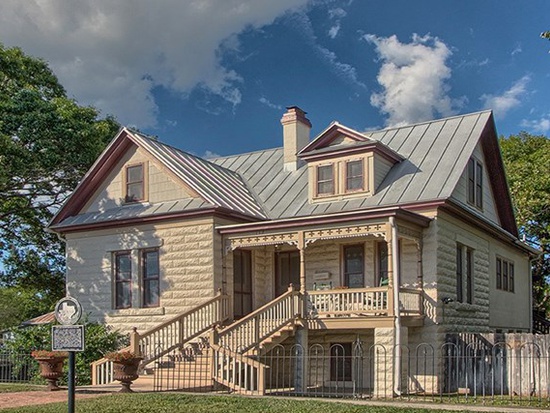 The maternal grandparents of Lyndon B. Johnson, Joseph W. and Ruth (Huffman) Baines moved away from Blanco, Texas in 1904, after financial losses that led J.W. to sell his house, and moved to Fredericksburg. Here he started up a new law practice and made a new modest home. The couple used cement blocks made by the company Basse Blocks, other features included “a gabled dormer with paired windows above the entryway, and jig sawn fretwork”.

Joseph W. Baines was born in Mount Lebanon, Louisiana on January 24, 1846. His parents were Melissa Ann Butler and George W. Baines. He was tutored for years by his father and then attended Baylor University at Independence. After college he was a part of the Walter L. Mann's Texas Cavalry Regiment, in which he served until the end of the Civil War. Then he moved to McKinney in Collin County,Texas, in 1867, to study law with James W. Throckman. In 1869, he married his wife Ruth A. Huffman in Blanco, Texas.

Ruth Baines sold this house a year after her husband died in 1906. While Lyndon B. Johnson never got to meet his grandfather Joseph W. Baines or spend time at the house in Fredericksburg, he was however able to meet his grandmother and see the house before it became a memorial in 2002.