Frances Payne Bolton was a prominent supporter of nursing education and historic preservation. She was born in Cleveland, Ohio, on March 29, 1885. She grew up connected to politics, as her uncle was the mayor of Cleveland, and her grandfather was a former U.S. Senator. Her husband, Chester C. Bolton, was a representative of the 22nd district in Congress. Frances Payne Bolton became Ohio`s first congresswoman, succeeding the same position of her late husband after his death. Both before her term and during, Bolton was an advocate for nursing education and a women's right to serve in the military. She is the namesake for Case Western Reserve`s Nursing School because of her work towards legislation in this field. 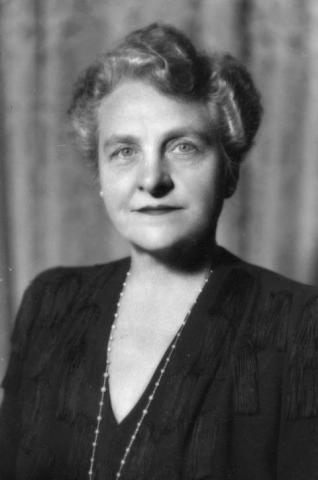 Frances Payne Bolton was a prominent supporter of nursing education and historic preservation. After the abrupt passing of her husband, Chester C. Bolton, in 1939, Frances Payne Bolton ran in a special election to fill the position. When she won, she became Ohio`s first female member of the House of Representatives. She would go on to serve fourteen additional terms and be joined by her son, Oliver Bolton, for three of those terms.

The Bolton Act was passed in 1943, which set up the US Cadet Nurse Corps, to train nurses for military and civilian roles in wartime. It also provided 5-million-dollars in federal funding to enable women to become nurses. Some of the legislation that she passed included a bill that would end discrimination against male nurses. Another bill that she passed would change the law so that female nurses in the military received the same rank and pay as male officers. Bolton joined the House Committee on Foreign Affairs and became the first woman to lead a Congressional delegation on a 20,000-mile tour of Africa in 1947.

Bolton was responsible for nurse Genevieve de Galard's invitation from France to the US when she requested the Secretary of State to extend the invitation in 1954. Bolton would speak highly of Galard, advocating her nursing achievements and feminism, and Galard went on to be awarded the Presidential Medal of Freedom.

Bolton voted in favor of the Civil Rights Acts and Voting Rights Acts during her terms as well. She also served as the vice-regent for Ohio of the Mount Vernon Ladies` Association, which continues to protect, preserve, and educate people about Mount Vernon. Frances Payne Bolton died on March 9th, 1977, 20 days short of her 92nd birthday, and she is buried in Section 9 Lot 40 at Lake View Cemetery in her hometown of Cleveland, Ohio.

The Frances Payne Bolton School of Nursing is now located at Case Western Reserve University, a globally recognized program that is ranked among the best schools of nursing. The program emphasizes the role of leadership in nursing, a testimony to its namesake, and her leadership achievements throughout history.