First founded in 1867, the town of Aubrey in North Texas was home to few families in its early beginnings. The newly settled town looked to make a living primarily on cotton and a variety of other crops and livestock. However, their cash crop of cotton which began as early as the settlement in 1867, began to sell for significantly less. As a result, the community replaced cotton with peanuts as their main cash crop. As part of this change, the first peanut dryer was built in order to get the town back on their feet. Today the very first dryer still stands as well as the upgraded dryer which was built in 1960, both located in their original location.

The three story peanut dryer displayed to the left was built in 1960 and would stay in business up to the early 1980s. 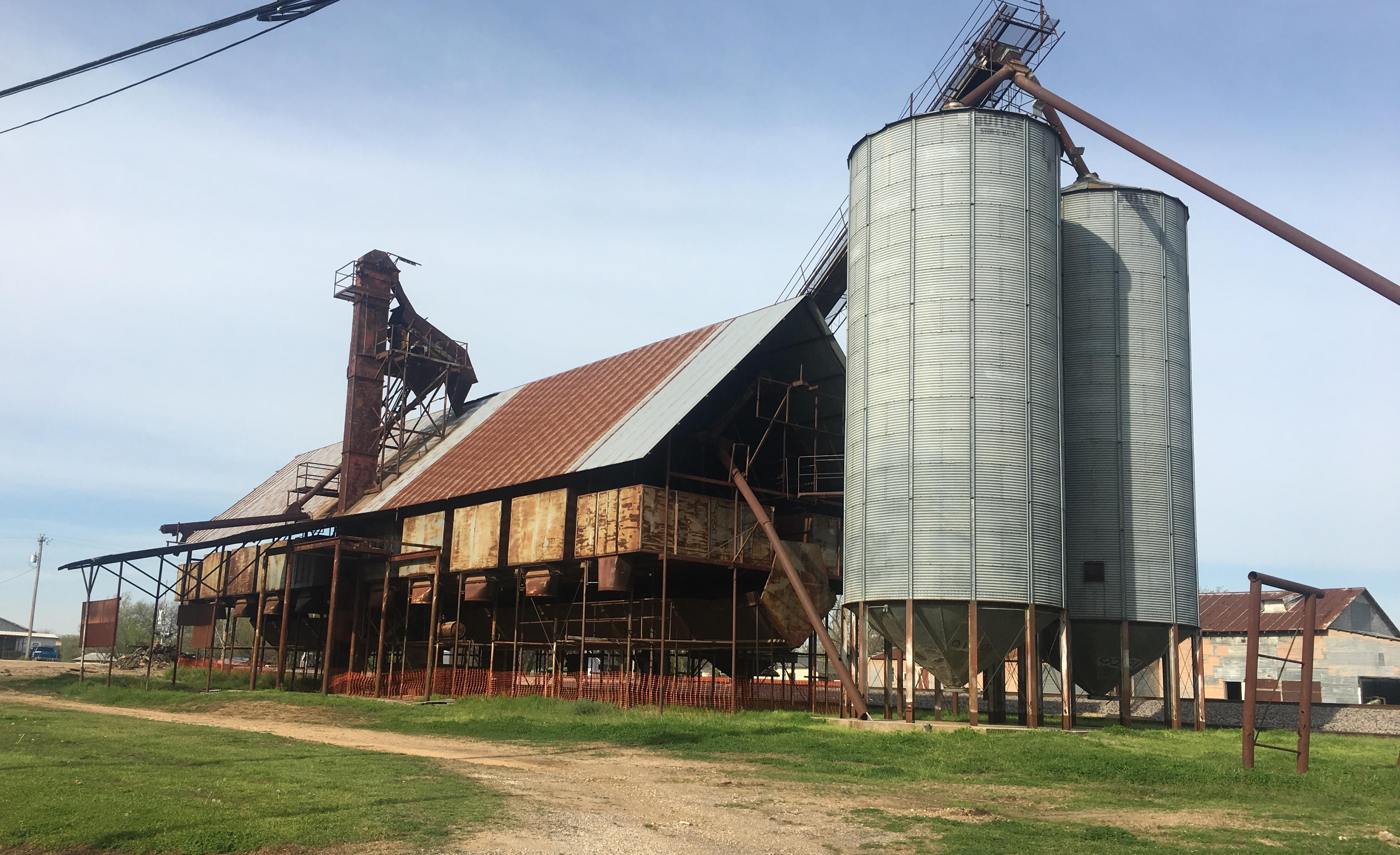 Pictured here is the original peanut dryer built in the early 1930s. This building still stands today with its original signs. 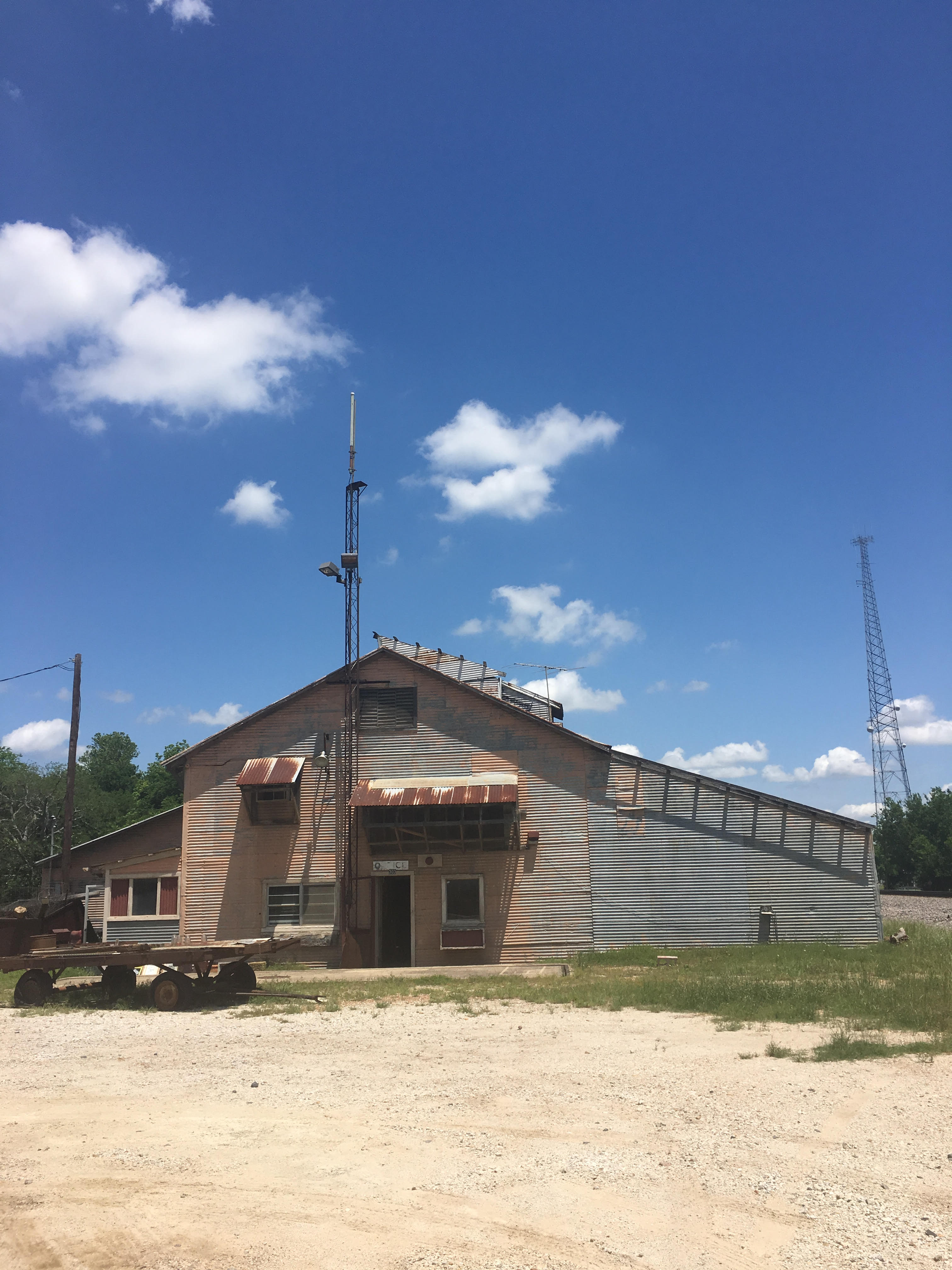 The events and conditions which lead the community to such a pivotal decision was due to cotton’s prices continually decreasing at a dramatic rate.1 In 1930, the price of cotton fell from eighteen cents to below ten cents a pound.2 Such a transition was risky to the community considering the atmosphere of the peanut dryer is crucial to the process of drying the peanuts. Luckily the moisture in the air and the mild climate was just right for the function of the dryer.3  The process of peanut drying is very meticulous as it must be watched carefully and performed exactly right so it does not result in under dried or over dried peanuts. For these reasons, it was so important to maintain the dryer properly in order for them to continue to rely on its product.

Because of its continued success in the city, the demand for peanuts in the area continued to grow for the next 20 years.  In order to keep up with the demands a more efficient and bigger dryer was needed.  It is believed that the three-story peanut dryer was built in the 1960’s in order to serve the massive peanut trade beginning way back in the 1930’s.  Today the peanut dryer still stands, across from downtown and located right off the railroad tracks which run straight through the heart of Aubrey.  Also located next to the original dryer which also still stands along with the signs on the side of the building.  The location of both dryers so close to each other and the tracks is most likely due to easy transportation of the peanuts.

The U.S. Census of Agriculture recorded that in 1992, nearly 4,000 acres of peanuts were planted. Towards the 1980’s peanuts were a huge contributor contributing approximately 3,000 tons of peanuts to be dried in the peanut dryer.  And although today, the industry has come to a halt, a local festival is held in the beginning of October each year in order to celebrate the early success of the crop and the city.4

This tradition of celebrating the peanut as the cash crop dates back to 1986.5 Nowadays, the festival is held in downtown Aubrey, across from the peanut dryer, where the people can view it while partaking in the many events held.  Many of the events include peanut-based games such as the peanut-spitting contest, where contestants compete to spit peanuts the furthest.  In a way, this is the main event of the festival as it takes place towards the end and many people attend.  A reflection of the continuing importance of the peanut industry to the town, this festival is so large that the entire city of Aubrey shuts down in order to celebrate.6