This 1971 concrete and stone-paneled building located on NC State's north campus was named in honor of Clarence Hamilton Poe (1881-1964) who was a leader in education, forestry, medical care, health, and social welfare. The building currently houses the School of Education (floors 1-6) and the Department of Psychology (floor 7). It is known as an example of "brutalist" architecture that clashes with neighboring brick buildings. Poe Hall is located at 2310 Katharine Stinson Dr adjoining one of the open green spaces on the NCSU campus. 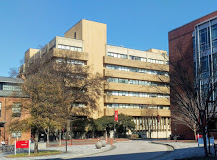 The building is named after Clarence Hamilton Poe (1881-1964) who served the state of North Carolina in several capacities.  As a proponent for agriculture and education, Poe worked to  was a member of the State Board of Agriculture and a leader in education, forestry, medical care, health, and social welfare. Poe was self-educated but later received five honorary degrees and countless other awards, including the World Peace Medal of the American Freedom Association.