Since 1930 Pioneer Hall has stood as one of the most beautiful landmarks in Salina, Kansas, and has served generations of students at Kansas Wesleyan University. Located at the southern end of Santa Fe Avenue, it is recognized in the community as the boundary of downtown Salina. Practical as well as picturesque, Pioneer Hall is critical to academics, administration, and student life at the university. It is also the religious center of campus as it houses Sams Chapel in the second and third stories.

The front of Pioneer Hall as seen from the main entrance of campus at the end of Santa Fe Avenue PC: kwu.edu 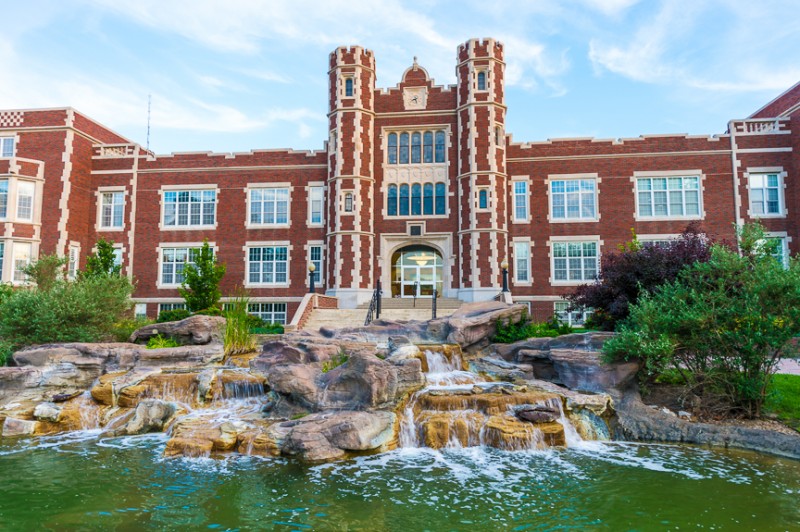 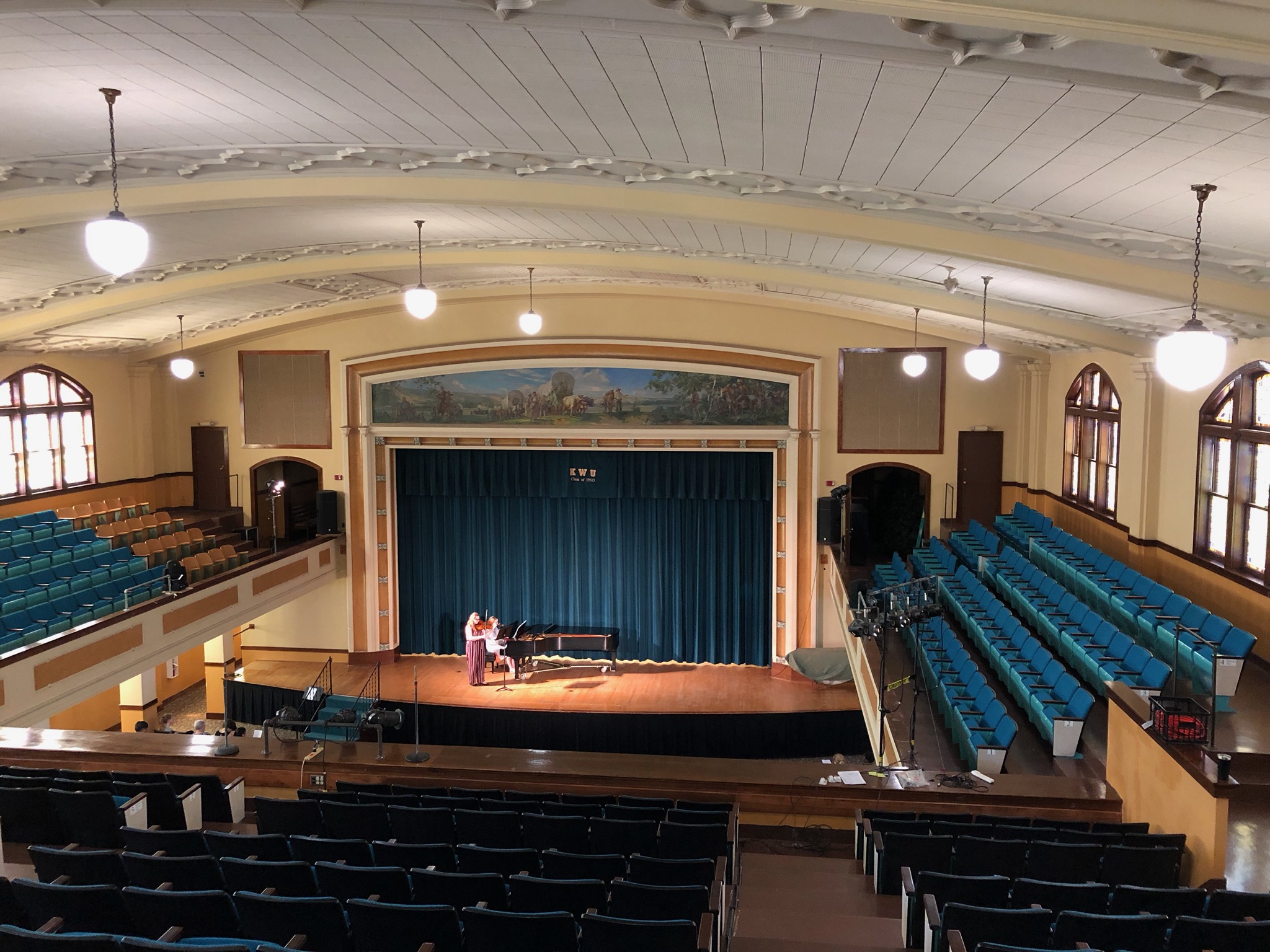 "Coming of the Pioneers"

Pioneer Hall, or The Hall of Pioneers as it was originally called, has served for many years as the centerpiece of Kansas Wesleyan University as well as southern boundary of Santa Fe Avenue and downtown Salina, Kansas. The red brick and off white concrete façade is highlighted by the abundance of surrounding trees and the rock fountain in the foreground. Standing at the top of a tall staircase, Pioneer Hall’s most notable features are the two crowned pillars that stand out as the highest points of the building, signifying its strength in the KWU community as well as its main entrance.

Plans for Pioneer Hall were laid in 1919 by Kansas Wesleyan President L.B. Bowers and the Victory Memorial Campaign with the idea of post-World War I expansion of the school in mind. The Victory Memorial Campaign was set to raise money for a new administration building and teamed up with the Methodist Episcopal Church and their Centenary Movement which was centered on raising funds for education. The original goal for the project was to reach 600,000 dollars but with the extreme generosity of the donors they were able to reach over $1,000,000 for the project.[1] The erection of the building saw several delays including the removal of the old building and several financial setbacks that occurred during the 1920s. Relocated in 1921, the old administration building was moved southwest at 40 feet per day for 550 feet and rededicated as Lockwood Hall.[2] Pioneer Hall was finally completed in 1930 and was dedicated on September 14, the forty-fifth anniversary of the University. Bishop Waldorf of Kansas City said on that day, “Because I believe Kansas Wesleyan is a place where the faculty make contact with God and where students form contacts with truth I dedicate it to this purpose, ‘to the search for truth and the advancement of learning, to the pursuit of wisdom and the promotion of righteousness, to the glory of God and the service of man.’”[3]

Upon dedication in 1930 the building was officially named “Hall of the Pioneers.” Jack Warner VanDerhoof said:

“This was a most fitting name. For those who have sensitivity for the great stream of tradition, Hall of the Pioneers, as long as it stands at the south end of Santa Fe Avenue, shall symbolize all people of years past who gave of themselves and their resources in order that a splendid and courageous educational effort be undertaken and sustained in the shape of Kansas Wesleyan University.”[4]

Today the building is commonly referred to as “Pioneer Hall”, but the meaning and tradition still hold true.

In 1959 Kansas Wesleyan finished an $85,000 renovation project which added a student center to the ground floor. The new student center included lounge areas, meeting rooms, a game area, a TV, and snack bar, as well as adding a southern entrance to Pioneer Hall.[5] Currently this addition is used by the music department and the student center is located in a new building.

Today, Pioneer Hall is the main feature of Kansas Wesleyan as well as a multi-purpose administration and education building. The bottom two floors hold all of the administration services that keep the school running like the business office and student services. It also holds the offices of school administrators including President Matt Thompson. Upstairs on the third and fourth floors are the offices of the humanities departments, psychology and sociology, and the education program, as well as the classrooms and computer lab that are used by students taking classes in these departments.

Also housed in Pioneer Hall on the second and third floors is Sams Chapel. Sams Chapel is a two story section of the building lined with stained glass windows that extends south, directly behind the pillars that mark the entrance. Completed in 1926 before the rest of Pioneer Hall, the chapel was named after the parents of the generous donor Mr. Earl C. Sams. Sams said on the day of the dedication of the chapel, “All life may be interpreted as a stewardship, particularly in the business world. In the use of the means we may accumulate God must be reckoned with not only as the source of wealth but the only guide by which we can hope to make use of that wealth.”[6] While it was designed as a refined place of worship, Sams Chapel currently has many uses. It is used as a concert hall for the school, a venue for university wide announcements and ceremonies, and an auditorium for guest speakers, among other things.

Inside Sams Chapel is the most important and meaningful piece of art on campus. Painted by artist Robert Grafton, financed by patron Laura Chubb, and completed in 1928, “the Coming of the Pioneers” continues the important theme of the entire hall; a tribute to those pioneers who made this all possible.[7] The mural, painted above the chapel stage, depicts families of pioneers in covered wagons coming to the forefront, while the Native Americans of Kansas sit in the periphery. While it is a tribute to the Pioneers, it depicts a sad reality for the Native Americans.

Pioneer Hall means as much today as it did in the 1930s and throughout its history. It is a symbol of the tradition and history of Kansas Wesleyan and Salina as a whole. The pleasing aesthetic of the view from Santa Fe represents the entire campus and perfectly welcomes students and their families to campus. Pioneer Hall remains one of the most symbolic and useful buildings in Salina.