The U.S.S Hartford was a steam-powered propeller ship, one of the most famous ships ever produced by the Navy Yard. After eleven months of construction, the ship was launched November 22, 1858. This was the flagship for Admiral Farragut during the Civil War. The U.S.S Hartford is most famously known for its role in the Battle of Mobile Bay in August of 1864. The anchor is now located at Fort Gaines on Dauphin Island, Alabama.

This is the sign in front of the anchor with a very brief history of the U.S.S Hartford. 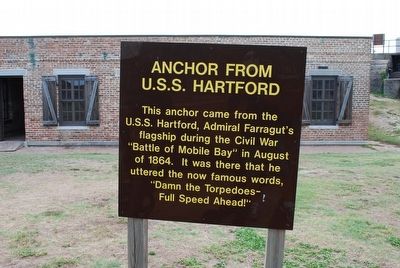 This is the anchor of the U.S.S. Hartford. 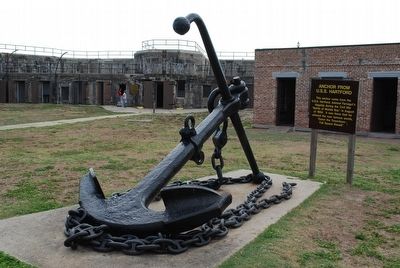 This picture shows where the anchor is at in relation to some of the buildings at Fort Gaines. 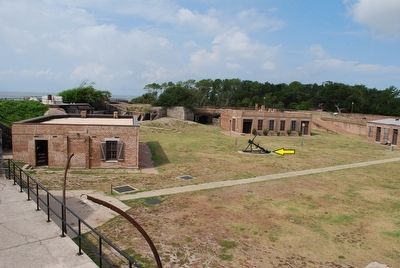 The Navy Yard workers started the construction of the U.S.S Hartford on January 1, 1858. After eleven months, the ship was done and launched on November 22, 1858, where hundreds of people gathered to watch. The ship had two steam boilers along with the engine, which was installed and built by the Boston Firm Harrison Loring. The Hartford was commissioned on May 27, 1859, and left for its first cruise the following month. The total time the entire building process took was just over 15 months. The Hartford could only sail for 13 days before a coal resupply was needed. The ship carried provisions for the crew that could last up to 80 days and had a water distillery on board to make fresh drinking water from the sea water. The ship could carry a crew up to 310 people.

Two years after the ship was commissioned, the American Civil War broke out. The ships arsenal includes 20 x 9'' Dahlgren smoothbore guns, 2 x 20-pounder Parrott rifled guns, and 2 x 12-pounder guns. Before the ship was used in the Civil War, the Hartford was assigned to the East India Squadron. After coming back to fight in the Civil war, the Hartford was present at several major battles of the war. She fought in the Battle of New Orleans during 1862, and then in the Vicksburg Campaign from 1862-63. The biggest role of the Hartford was in the Battle of Mobile Bay in Alabama. This battle is where the famous line "Damn the torpedoes-full speed ahead!" was uttered by Admiral Farragut. The Union was victorious in all three of these battles, and they served as turning points in each campaign against the Confederacy.

After the war, the Hartford was decommissioned for some time for repairs. The ship then was used as a flagship for the Asiatic Squadron before being decommissioned again. The Hartford was then under construction and rebuilding in Mare Island, California from 1890-1899. October of 1899, she was recommissioned to the Atlantic to train new naval recruits. She was then berthed in 1912 at Charleston, South Carolina, and was later decommissioned again in 1926 and sent to Washington D.C. In 1938, the vessel was planned to be a part of a museum by the current president at the time, Franklin Roosevelt. When President Roosevelt died, the museum plans died too.

The Hartford was then relocated once more to the Norfolk Navy Shipyard and eventually sank in 1956 by the abuse from the elements long-term exposure. The anchor was then sent to its present location at Fort Gaines in Dauphin Island, Alabama.